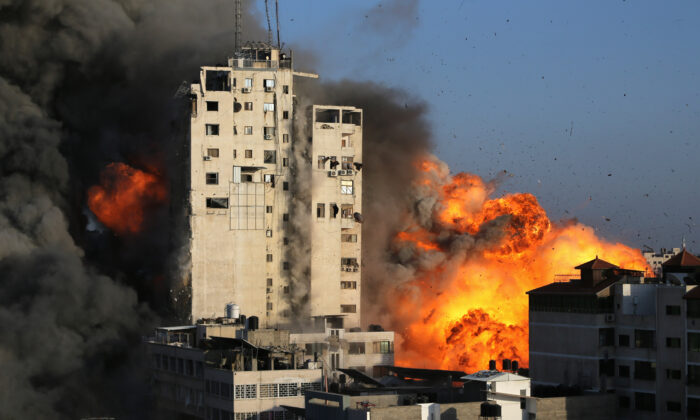 The latest concentrated rocket attack on central Israel by Hamas in the functionally (and militarily) independent city state of Gaza is just the latest round in their long-term war to destroy the Jewish State of Israel.

If you read the “experts,” from the left-leaning New York Times to some of even the most conservative news sites, most of the “experts” dwell on what are called the “proximate” causes of this latest piece of murderous aggression. The New York Times, for example, in one headline argued that leaders from “both sides” might gain from the conflict, each in their own way. Really!

“Both sides” is the politically correct language that defines the doctrine of “moral” equivalence of the ever-rising left. That’s to say, they rarely declare that one side is right or the other side is wrong. What they like to do especially when dealing with the victims of Jihad is to declare that both sides are wrong; that is to say, both victim and victimizer are like children in a school yard—they just “should stop fighting.”

Instead, why don’t we ask ourselves why Hamas continues to attack Israel? The answer is so simple as to beggar belief. We don’t know it because the liberal press doesn’t “listen” to Hamas and report on it. Simply put, Hamas, in its own words, exists as an organization to wage a Jihad against the Jewish people and toward the destruction of the Jewish State of Israel.

“Listening” to Hamas means reading their 1988 charter or covenant. It has 36 articles, and the overall message those points give is that the State of Israel must be physically destroyed. It gets very redundant at times.

Let’s quote Article 11: “The land of Palestine is an Islamic Wakf [Holy Possession] consecrated for future Moslem generations until Judgement Day. No one can renounce it or any part or abandon it or any part of it.”

So much for peaceful coexistence with the Jewish state as guaranteed by international law since 1948, and actually decades before that, at the San Remo conference of 1920.

So, by now there should be no misunderstanding of why Hamas is showering missiles on central Israel. I think they’ve made themselves clear.

But one could still argue that this is just a take on “Palestinian or Arab Nationalism.” So let’s take a brief look at Article 32: “Zionist scheming has no end, and after Palestine, they will covet expansion from the Nile to the Euphrates River when they have finished digesting the area on which they have laid their hand, they will forward to more expansion. Their scheme has been laid out in the ‘Protocols of the Elders of Zion.’”

So, if we understand Hamas correctly, the Jewish State of Israel doesn’t just want recognition and security within its historic homeland but is intent on the conquest of the modern states of Egypt, Syria, Jordan, and Iraq. How do they know about these evil intentions? Well, they’ve read the Protocols! Even left-leaning Wikipedia knows that the Protocols are the classic anti-Semitic forgery.

I quote their article:

“The Protocols of the Elders of Zion or The Protocols of the Meetings of the Learned Elders of Zion is a fabricated antisemitic text purporting to describe a Jewish plan for global domination. The hoax, which was shown to be plagiarized from several earlier sources, some not antisemitic in nature, was first published in Russia in 1903, translated into multiple languages, and disseminated internationally in the early part of the 20th century.”

None of Israel’s neighboring states who are formally at peace with Israel, such as Egypt and Jordan, have called for the dissolution of Hamas or its charter. Nor have any of the Gulf States who have just made peace with Israel.

Clearly the Hamas charter draws on a thousand years of medieval anti-Semitism, which for religious reasons has blamed all the trouble in the world on the Jewish people.

But the young reader (who has been denied access to good historical writing at his “woke” college or university) having read this article will perhaps exclaim, “I knew nothing about this!”

To him or her I say, do a little homework. Read at least one “non-woke” book on the history of the Middle East (Here’s one: “The Middle East” by Bernard Lewis). Then write a letter to the editors of your local student rag and ask them to do the same.