Hell and Good Company: The Spanish Civil War and The World It Made 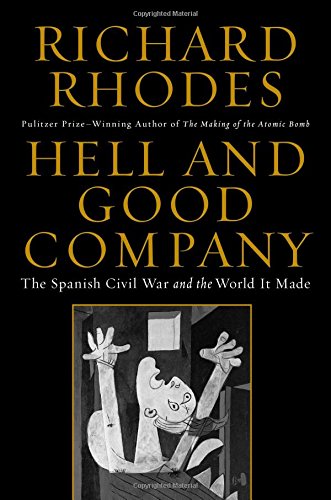 Hell and Good Company: The Spanish Civil War and The World It Made
by Richard Rhodes
Simon & Schuster, 2015
320 pages

Which 20th century war involved the gang rape and castration of POWS? Massacres of villages from the air? Desecration of churches? Military revolts? Communist backing?

The immediate answer would be Vietnam. But the actual one is the Spanish Civil War (1936-39), whose "good war" connotations are second only to World War II's. Although the Left, who supported and in many cases manned the trenches on the Loyalist side, (a semi-socialist group that had been democratically elected to the Spanish government in 1934), lost the war to the military rebellion led by a Hitler-backed General Francisco Franco, they have owned the interpretation of the conflict. In their history lesson, the conflict was about liberal democracy versus simon-pure fascism, a conflict that should have had US backing (Roosevelt was fearful of offending the Catholic vote, who overwhelmingly supported Franco). If it had, went the argument, perhaps World War II, which broke out mere months after the Loyalist defeat, might have been averted as Hitler would have seen unity among the democracies.

But Richard Rhodes, a historian mostly famous for his book on the development of the atomic bomb, complicates this portrait. Advertised as a basic examination of the hardware and technical innovations used and invented in the conflict, Rhodes' book, despite assuring readers it would not be another ad nauseam descent into the crazy quilt politics of the conflict, cannot withstand dealing with them.

Not that there weren't technical innovations. To aid Franco, Hitler orchestrated the first troop airlift in history, dropping Franco's troops onto native soil. The world's first aerial bombing of civilians, was carried out by Hitler's Condor Legion at Guernica (inspiring Pablo Picasso's famous painting of the event).

But the conflict also added to political language. The term "fifth column," prominently used in the Cold War to depict communist secret agents planted to insure the downfall of a targeted nation, was first used to describe behind-the-lines fascist efforts. The McCarthyite factions of the postwar American Right would use the participation of---let's be frank---American communists on the Loyalist side for the derogatory term, "premature anti-fascism;" this became code for military enthusiasms not for liberal democracy but for Soviet imperialism by American leftist soldiers.

But the conflict also pioneered political actions that occur even today. Propaganda, once defined as slanting stories for a particular viewpoint, was now used to invent battles that never occurred, and to sanitize the frank desertions and self-inflicted wounding by Loyalist soldiers. From this altering of history, Orwell was inspired to create the objective-truth killing Big Brother of Nineteen Eighty Four. Heresy-hunting, once confined to religious dissent, had a securalized form in the Spanish Civil War, as Stalin, a backer of the Loyalists, sought to import his murderous purge trials into Spain. Because Orwell fought with a Trotskyite regiment, whose namesake Stalin eventually murdered and whose followers he labeled "fascists," the writer was hunted by the Stalinist Spanish secret police. Had he been caught he would have been a victim of a Stalin-style purge trial. Luckily he escaped. But as recent biographies of him have shown, he feared assassination all of his life (he panicked when his son's nanny brought her communist boyfriend to the Isle of Jura, his Scottish retreat where he wrote Nineteen Eighty-Four; he was convinced that he was about to be the victim of the same kind of household-dwelling secret assassin that did in Trotsky).

Soviet duplicity invaded other literary efforts, most notably Ernest Hemingway's. In For Whom The Bell Tolls (1940) he immortalized Soviet well-fed cynicism as inhabitants of his Hotel Gaylord. The novel itself represented Hemingway's break with his one-dimensional Stalinism in the late 30s, and signaled to literary critics the writer's return to artistic integrity. American letters would also be affected when, during this period, he would end his friendship with John Dos Passos over the Loyalist murder of the latter's friend, Jose Robles.  Hemingway took the Loyalist side, seconding their verdict that Robles was a fascist spy. Dos Passos never did, and it was this murder more than anything else that caused him to shift rightward in his politics.

Rhodes is no stranger to the ironies the conflict engendered, and, although his sympathies are clearly Loyalist, he doesn't shy away from attacking the Soviets. But he doesn't take it as far as he should. An earlier book by historian Cecil Elby shows how stateside American communists attacked returning veterans, who had the audacity to denounce the "fascism is a matter of taste" line of the new Hitler-Stalin military partnership in 1939. The Party blacklisted them from communist-dominated unions, denied aid for their comrades languishing in Franco's camps, and were spit upon by female Party members; their knife-wielding male members stood ready to pounce on the saliva-drenched victims if the women were insulted or struck.

The House Un-American Activities Committee, a Congressional body tasked with investigating extremist movements and a particular target in the post-War period of the American Left, nevertheless became the only venue for American Loyalists protesting the Communist behind-the-lines executions of their comrades. Such is the lingering politicization of the Spanish Civil War, that Rhodes can only take his technical wonkery so far.

Ron Capshaw is a writer in Midlothian, Virginia.

If you have enjoyed this article and want to read more by Ron Capshaw, please click here.

We must continue to drain the swamps of antisemitic lies

The Problem with Peterson

The Tories should stand firm against eco-alarmists

A Letter To Frugal Americans

After Hagia Sophia, Muslim Ruler Wonders, Why Not the Cordoba Cathedral?

A Tyranny of Health?

Clouds of Summer Obscure the Coming Thunder of November

With Declining Birth Rates, Is There Nothing For the First World But ‘Unlimited Mass Migration’?

Calls for Jihad at Boston Mosque

Reckoning With the Riots

Native Americans and the Law