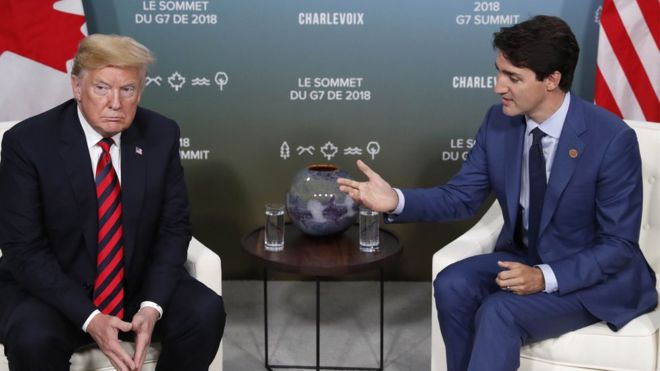 It is difficult to imagine what possessed the prime minister to open up the trade discussions with the U.S. with allegations that American right-to-work laws are an unfair trade practice and that gender equality, native rights, and wide-ranging ecological questions would all have to be part of the negotiation. Most of this is not a federal matter in either country and none of it has anything to do with the traditional definition of foreign trade. Aggressive frivolity was not the right approach. Nor should Trudeau have taken a shot at the U.S. president shortly after he took off from the Charlevoix G7 conference on his way to Singapore. And Trump’s comments last week about how he would make no concessions to Canada, and he had no great objection to failing to reach agreement with Canada, were outrageous. (He did get this country a round of applause when he said “We love Canada” to one of his faithful mid-country audiences at Evansville Indiana 10 days ago.) Canadians, including Trudeau, have made too much about tariffs being threatened by the U.S. administration under national security legislation. That is no more relevant than was the fact that no war was underway or apprehended when Pierre Trudeau imposed the War Measures Act in 1970 to deal with the FLQ terrorists. You use the statutes at hand.

It is tempting and easy to play the anti-Trump card for Canadians. Foreigners always dislike assertive American presidents except when they need their strength to defend them. And as Trump is engaged in a fight to the political death with the entire post-Reagan American political elite, including the national media, whose feed is uncritically parroted by the Canadian media, this country has been carpet-bombed with misinformation about him. Trump’s job is to advance American interests, including the retention of allies, but not to allow his country’s pockets to be picked. Throughout the Cold War, there was a policy consensus in Washington that it was in the country’s interest to run a large trade deficit and to tolerate the flight of a large number of jobs to cheaper labour countries, in the strategic purpose of defeating the communist powers.

The United States doesn’t care about leaving some protection for the economically minuscule Canadian publishing and cultural industries, and both sides want some sort of enforcement arrangement, so an agreement should be possible

It was sound policy and it worked; the Americans won the Cold War, international communism collapsed, democratic government and relatively free market economies vastly expanded, and China did the Americans the honour of trying to become their capitalist rival. The Chinese won’t win that contest and it is Canada’s misfortune to have got in the way of the American strategy to lever on its position with Europe, Japan, Mexico and Canada, to put the heat on Chinese exploitation of those markets. Canada does not have a surplus in the transfer of goods and services with the U.S., and was not a serious subject of American ire. The Europeans and Japanese were running outsized trade surpluses with the U.S., and when the new administration signalled its intentions, Japan gracefully caved quietly and cordially. The Europeans huffed and puffed as is their wont on most trans-Atlantic issues and then the titular leader of the European Union scurried across the Atlantic with his coat-tails trailing behind him to agree a framework for a face-saving recalibration of the relationship.

Canada has less than a third of Mexico’s population, but a GDP half again larger, and took the leading role in negotiating with the Americans, assuring the Mexicans that Canada would take care of them. The United States had no trouble breaking up that pantomime horse. Mexico has enticed many American companies to build factories just across the U.S. southern border and export their products and unemployment back to the U.S. while facilitating the illegal entry of huge numbers of destitute Mexicans and Central Americans into the United States and encouraging American companies not to patriate their profits back into the U.S. but to redeploy them in Mexico, taking advantage of both cheap labour and low corporate taxes in Mexico. Historians of the United States in the future will wonder what lunacy possessed the U.S. government, the executive and the Congress, of both parties, to put up with this nonsense as long as they did. No one should doubt that Trump has a strong mandate to put it right. He has reduced both illegal entry into the United States and the overall trade deficit by about 50 per cent, increased oil production and has drastically reduced oil imports.

If the prime minister elects to fight it out, we must all support him against Trump’s America. But that would require a serious nationalistic election campaign, including some level of Canadianization, at fair value, of foreign-owned industry, and a much more growth-oriented tax structure

A couple of weeks ago the outstanding points with Canada appeared to be Canadian softwood subsidies, agricultural tariffs, especially the scandalous protection of excessive dairy product prices (a major issue in the last Liberal and Conservative leadership campaigns. It is not the least irony that if Trump reduces the dairy products price support, he could heal a serious schism in the federal Conservative Party). There was also a need to agree on an enforcement mechanism and American demands to open Canada to U.S. banks, as the United States has allowed large penetrations of Canadian banks, especially the Toronto Dominion Bank and Bank of Montreal. (Canadians will not rise, pitchforks in hand, to defend the domestic banking cartel.)

It now seems that the Canadian government is taking a stand on the enforcement mechanism and cultural and publishing rights. Both positions are correct, and imply that a climb-down is in progress. The United States doesn’t care about leaving some protection for the economically minuscule Canadian publishing and cultural industries, and both sides want some sort of enforcement arrangement, so an agreement should be possible. Suggestions that the Americans have to deal are bunk. It is a full-employment country (more jobs to fill than unemployed), with about three times Canada’s and 13 times the Eurozone’s levels of GDP growth. Canada has 120,000 auto workers’ jobs alone on the line, and while there would be inconveniences in the U.S., all manufacturers could relocate production from Canada within a year. Even more irresponsible are exhortations from Canadian commentators to face Trump down because the Congress will desert him. Hopelessly stupid though Trump’s domestic opponents are, now drifting toward the lobotomous left that makes George McGovern seem like William McKinley, and having armed the president with lethal electoral weapons on taxes and immigration, even they are not going to champion Canada against the U.S.

If the prime minister elects to fight it out, we must all support him against Trump’s America. But that would require a serious nationalistic election campaign, including some level of Canadianization, at fair value, of foreign-owned industry, and a much more growth-oriented tax structure. That could, in the hands of a very skillful leader (for which there are precedents in this country including the incumbent’s father), be tied in with re-establishing the high court of Parliament, invoking the Notwithstanding clause to put these megalomaniacal courts in their place, ceasing to grovel to the most egregious whims and caprices of native leaders, and building all the pipelines that have recently been under consideration. Trudeau’s grand bargain of pipelines for carbon tax is doomed anyway; we need the pipelines and the carbon tax is an attempt to justify increased gasoline prices with pious claptrap about saving the universe. It’s a dead and unlamented pigeon. We would revert to WTO rules and devalue our dollar to be more competitive. All this would also require a more complete reversal of policy course than Pierre Trudeau made when he imposed wage and price controls or Jean Chrétien made when he reaffirmed free trade.

If Justin Trudeau is not up for it, he should make the best deal he can and claim it as a victory — the country is so brainwashed about Trump he might get away with it. Canada needs this deal a lot more than the U.S. does and it should happen.