A New Government in Israel 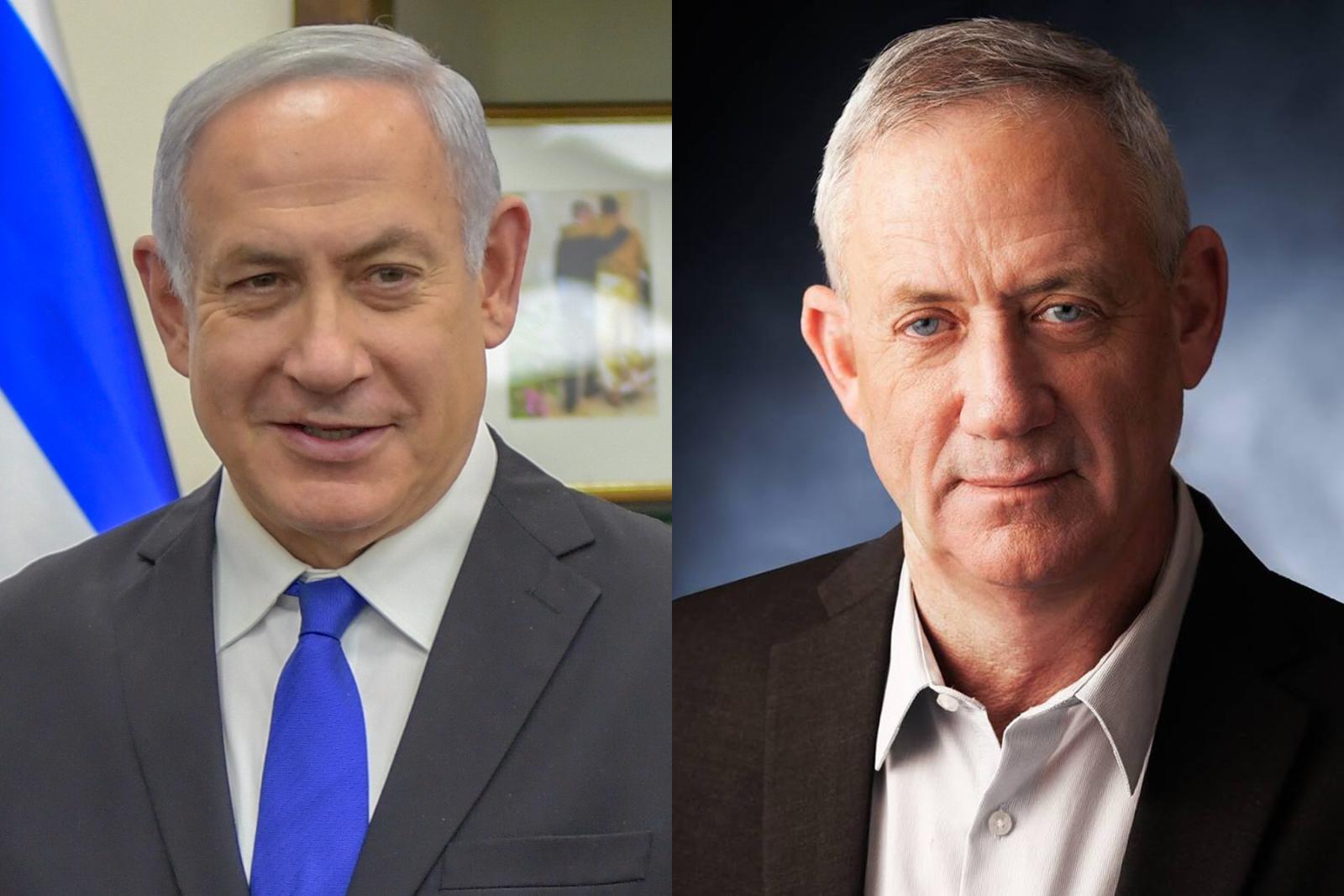 At last, a compromise has come along, the lonely days are over and life is like a song. At last, the skies above are blue ever since Israelis looked at the realities of life.

One of the unintended consequences of the pandemic Covid-19 is the agreement by political rivals in Israel on the formation of a government and political stability. The virus has led to political cooperation not only between left and right but also between Israelis and Palestinians. After three elections in one year, nobody wanted a fourth election in the midst of the medical and economic problems resulting from the pandemic. The agreement represents a spectacular U turn for Benny Gantz, ex-army head, leader of the Blue and White party, Kahol Lavan, who vowed he would never serve under an indicted prime minister, referring to Benjamin, Bibi, Netanyahu, leader of the Likud party, who has been indicted on charges of fraud, bribery, and breach of trust. .

After weeks of intense negotiations, a coalition government was formed between present Prime Minister Netanyahu and Benny Gantz, on April 20, 2020. It is termed a “National Emergency Government” which would primarily deal with three issues; the Covid-19 plague which so far has meant 15,500 Israelis infected and more than 200 dead; an economic crisis with 25 per cent unemployment; and discussion of a peace plan including the one proposed by the Trump Administration.

In the new administration, deadlock has been ended as power will be shared between the two political blocs, which can for convenience, if not completely correctly, be termed the Center Left and the Right. In the complicated Israeli political milieu the Left alliance which is not an ideologically unified movement but a pluralistic alliance, including right wing parties wanting to defeat Netanyahu, controls 62 seats in the 120 member Knesset, Parliament. In the alliance, which changes from time to time depending on personalities involved who broke away from the centrist party , the Blue and White party, the name referring to the colors of the Israeli flag, embraces Israel Resilience (33 seats), Telem (3) led by Moshe Ya’alon, Yesh Avid( 13),  led by Yair Lapid, supported by Labor, Gesher, and Meretz (7), Yisrael Beiteinu , Israel Our Home, secular nationalists led by Avigdor Lieberman  (7), and the Arab Joint List (15) which consists of the merger of politicians predominantly representing Arab Israelis. The Right alliance  has 58 seats, Likud (36), Yamina (6), and  Ultra-Orthodox (16).

The proposed government is expected to contain initially 32 members and then 36 cabinet ministers and up to 16 deputy ministers. This is by far the largest number in Israel’s history.  David Ben-Gurion, first prime minister, had a cabinet of 12 ministers; Menachem Begin had 13. By comparison the present U.S. Trump Administration has 17 members. This large Israeli number probably means that most of the 15  Knesset members of Likud will become ministers, leaving few to become important as heads of committees  in the legislature.

The new government is a complex arrangement. Half of the ministries will go to Likud and allies, and half to Kahol Lavan and the Labor party. In an unusual addition, the two blocs can share their cabinet slots with any other parties they bring into government. Already, Kahol Lavan has said it would include an Arab, who is not one of the Knesset Arabs, into the cabinet.

The agreement brings back the formula used once before in 1984 of alternation of prime ministers.  By the new arrangement, Bibi Netanyahu will become PM for the first 18 months, then followed by Gantz as PM for the next 18 months. Gantz will be defense minister and substitute PM.

But Netanyahu will have influence over judicial appointments, since approval of both groups is needed for appointment of Attorney General and State Prosecutor. In effect this means that he has virtual veto power over officials who will determine his legal fate in the trial that has been postponed for several months and is due to start on May 24.

Likud will have the position of speaker of the Knesset for the whole of the tenure of the government. Bibi also has the right to appoint four ambassadors to top diplomatic positions, UN, Britain, France, and Australia.

Each of the two blocs will have the chair of 7 Knesset committees. Israel will also use three unusual procedures.  One is the so-called Norwegian law. This means that cabinet members can resign their seat in the Knesset and therefore provide the opportunity for members of their party to occupy them. The second factor is that each of the two leaders of the blocs control the actions of his own bloc in the cabinet, not those of the whole cabinet. The third is that both leaders are entitled to an official residence financed by the state for the entire life of the coalition.

In the new governmental arrangement neither side can claim victory, but the crucial fact is that Bibi has survived as the real power in Israel , despite his forthcoming legal problem. He remains in power, Israel’s longest serving prime minister, though without a parliamentary majority.  His opponent Gantz had seemed to be the probable winner because of his endorsement by a majority of the Knesset, but, apart from their united front against Bibi, his faction  was divided and his alliance split into four different parties. In this, two factors are particularly interesting.

One is the behavior of Avigdor Lieberman, the mercurial Soviet born secular nationalist and attempted kingmaker who broke with Bibi last year, and threw his party Yisrael Beiteinu which won 7 seats in Knesset, behind Gantz. But he did not support the final coalition, dismissing it as one of opportunists “who have lost all shame.” In addition, Lieberman has been hostile to Arabs, while the Arab Joint List, leftists and Palestinian nationalists, Islamists and secularists, are supporting Gantz.

The second factor is the uncertain support of Arabs, especially the Balad, led by Mtanes  Shehadeh which won three seats and opposes the idea of the State of Israel as a Jewish State  was strongly pro Gantz.

Gantz attempted to follow the example of Yitzhak Rabin, former military chief of staff who became PM, but this did not work out. His rhetoric was pointed in the past. In Tel Aviv in February 2019 he called Bibi stressed, fearful, and sweating, and attacked him for spending time in the U.S. representing Israel as a diplomat and public speaker, speaking English at luxurious cocktail parties, and working his way bravely and determinedly between make up sessions in TV studios. Bibi replied  by pointing out that Gantz headed a cybersecurity firm, but could not stop his own phone from being hacked by Iranians.

The left did not win the political battle and Bibi survived, a clever wily politician, some say a political magician, unlike the politically inexperienced Gantz who had vowed never to serve under an indicted PM but changed because of the presence and danger of Covid-19. The new coalition, according to Gantz, has overcome differences to find common ground,  and promote the establishment of a government for the sake of the Jewish people.

What to expect? The government as emergency has suggested that it will concentrate on Covid 19 related legislation for the first six months. But almost certainly it will be considering the Trump plan, and the extension of sovereignty to part of the West Bank. If there is no agreement on this, by July 1, Netanyahu can bring it to the Knesset where the concept of sovereignty or annexation would be agreed. The Israeli decision on what to do depends on expectations of the U.S. presidential election. Israel assumes that Trump is more favorable to Netanyahu’s policy than is Joe Biden.

Whatever the view it is enticing to consider four factors. One is the impending corruption trial of Bibi, which has been postponed in the past and which may drag on.  A second is the continuation of the cultural war between religious and non-religious Jews.  A third is the increasing prominence of Israel Arabs in public affairs especially now that an Arab is due to become part of the governing elite.

Above all is the fourth factor, discussion of if not complete resolution of the existential question, the definite borders of the State of Israel, the settlements in the West Banks, and east Jerusalem. It is indeed ironic that this issue, unresolved since 1967, may be resolved as a result of fear of Covid-19.