A Review of Ibn Warraq’s The Islam In Islamic Terrorism 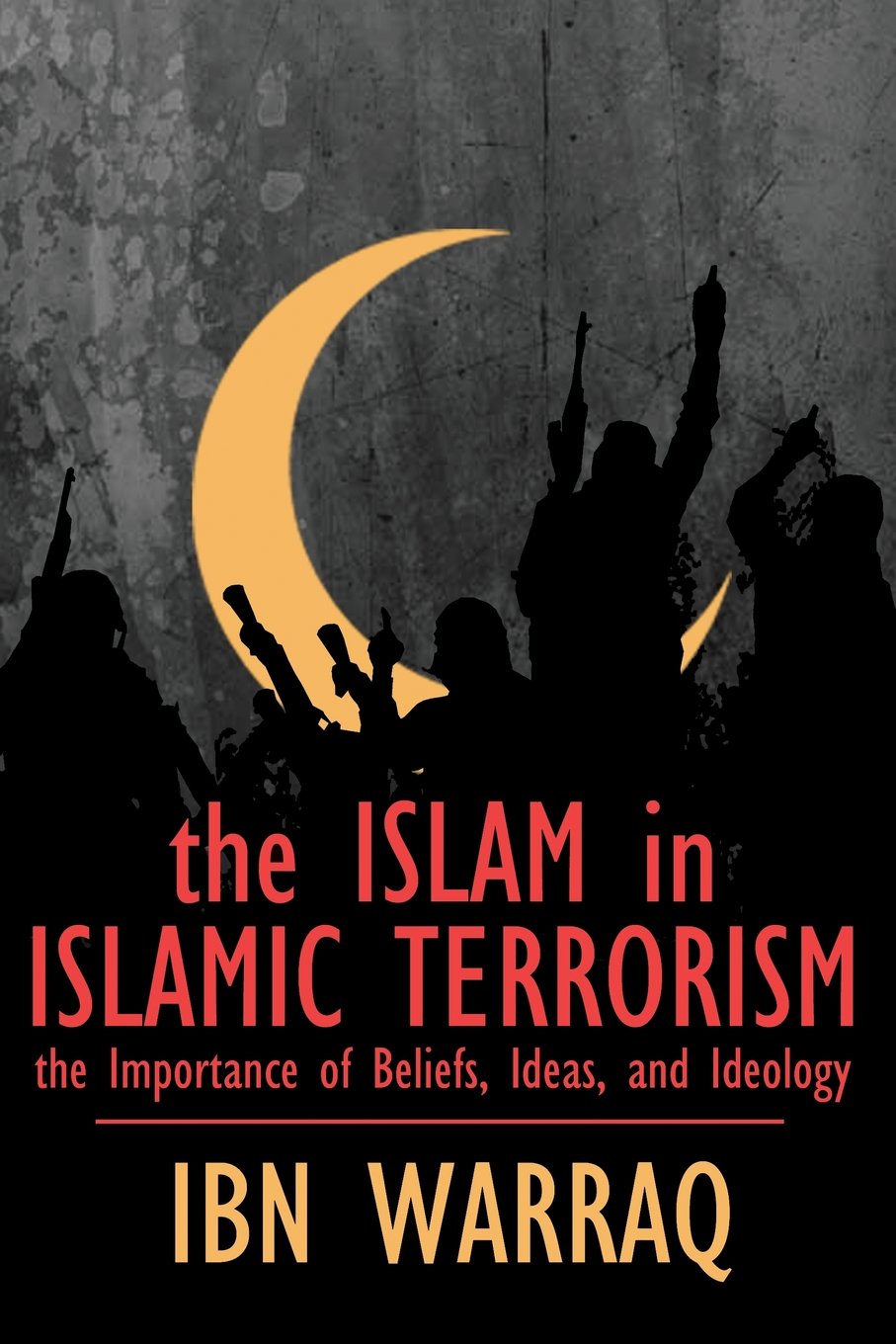 Ibn Warraq, the celebrated apostate, author of Why I Am Not A Muslim and of scholarly works on the Koran, Muhammad, and early Islam, as well as polemical works in defense of the West, has now written The Islam in Islamic Terrorism, showing, in the words of the Islamic fundamentalists (or, more exactly, revivalists) themselves, what really motivates Islamic terrorists today, and what has motivated them since the time of the Kharijites in the first century of Islam: the belief in the need to recover the pristine Islam of the time of Muhammad, by removing all innovations (bid’a), the further belief that it is the duty of Muslims to wage Jihad against all Unbelievers until Islam everywhere dominates, and to bring about the resurrection of the caliphate, and the imposition of Islamic Law, or Sharia, all over the globe.

Ibn Warraq’s The Islam In Islamic Terrorism is a brilliant series of reported echoes down the corridors of Islam, where the same complaints about bid’a, the same insistence on regulating every area of a Believer’s life, the same refusal to allow freedom of religion or thought, the same duties of violent Jihad and Commanding Right and Forbidding Wrong, the same demands for a return to the same pristine Islam of Muhammad, the same virulent antisemitism, the same quotes from the Koran and Hadith, the same hatred of Infidels, the same insistence that “we love death more than you love life,” the same call for bloodshed and Muslim martyrdom, the same dreary fanaticism, are thoroughly described and dissected, and above all the various violent manifestations of this revivalism over the centuries are linked to one another, as Ibn Warraq brings to bear the massive research he has been conducting over many years, in primary and secondary sources, and here deploys to splendid effect.

Ibn Warraq has performed a service for all those who are at last ready to look beyond the present platitudes about socioeconomic and other putative “root causes” of Islamic terrorism — Israel, the Crusades, European colonialism, American foreign policy, all held up for dissection and dismissal one after the other. He cites the studies that reveal Muslim terrorists to be both better off economically, and better educated, than the average Muslim. Most of the terrorist leaders have received solid educations in Islam, giving the lie to those apologists who claim that only those “ignorant of the true Islam” become terrorists.

He notes that Jihad against the Infidels started more than 1300 years before Israel came into existence, that the Muslims paid little attention to the Crusades until very recently, and that American foreign policy has often favored the Muslim side, rescuing Arafat from Beirut when he was besieged by the Israelis, supporting Pakistan despite its collusion with terrorists, looking away when Turkey invaded Cyprus, putting troops in Saudi Arabia to protect that kleptocracy from Saddam Hussein, and lavishing hundreds of billions in foreign aid on Muslim countries, and more than four trillion dollars on military interventions and “reconstruction” in Iraq and Afghanistan, in the hope, likely forlorn, that those countries could be made less barbarous than before.

Having dispatched these factitious “root causes,” Ibn Warraq returns us to the o’erweening fact of Islam, and begins commonsensically with the Koran, hadith, sunna, and sira, showing how violent Jihad, including the weapon of terrorism, is deeply rooted in the texts of Islam and the example of the Prophet. Muhammad was the first Islamic terrorist. Ibn Warraq then introduces readers to a course in Islamic history, bringing to bear an enormous amount of research — every vein is mined with ore — on a succession of violent revivalist movements that wished to return Islam to its pristine state, ridding it of any innovations (bida’). He begins this story in the first century of Islam with the Kharijites, with stops in ninth and tenth century Baghdad, sixteenth century Istanbul, and eighteenth-century Arabia, right up to those ideologues and thinkers who inspire the terrorists today, including Mawdudi, Qutb, Azzam, Faraj, and Khomeini. He gives considerable attention to the other duty of Muslims, that of Commanding Right and Forbidding Wrong (he tentatively suggests that “Jihad” might be considered as coming under the duty of “Commanding Right”), and what that duty has meant for activists and terrorists. His account of Commanding Right and Forbidding Wrong appears to be the most extensive treatment to date of this duty outside of the specialist literature.

He is a Great Debunker. He calls into question the “greater Jihad” of spiritual struggle, so beloved of Muslim apologists, quoting extensively from the modern ideologues who insist it is based at most on a single weak hadith (and some claim even that does not exist), but in any case, the non-spiritual kind of Jihad remains a duty incumbent on all Muslims. He debunks, too, the common perception of Sufis as pacific, showing how, both in Safavid Persia and, later, in India, Sufis eagerly promoted, and participated in, violent Jihad. This matters, because the myth of the “peaceful Sufis” holds out a false hope — a peaceful sect of Muslims! Maybe they can all become Sufis! — that gets in the way of recognizing a much grimmer reality.

His detailed treatment of Haj Amin Al-Husaini is an example of his thoroughness, and his ability to see what others have overlooked. He shows how Al-Husaini’s fanatical antisemitism had nothing to do with the Nazi version, but was rooted in Koran and hadith. He rejects, that is, Matthias Kunzel’s claim that Al-Husaini learned his antisemitism from the Nazis. Ibn Warraq insists that there was no need; Islamic antisemitism predated that of Hitler by 1350 years. He does offer new revelations about Al-Husaini’s role in the Holocaust. It was he who convinced Hitler not to let German Jews leave Germany, because he was afraid they would move to Palestine. Several hundred thousand Jews were thus condemned to die because of Al-Husaini. Furthermore, in order to keep Jews from elsewhere in Europe entering Palestine, Al-Husaini pressed the British to undertake a blockade so that Jewish refugees could not land in Palestine. The British, wanting to curry favor with the Arabs, agreed to this demand. How many Jews from all over Europe, who might have been saved, died as a result of Al-Husaini’s action? Possibly a million might have escaped Europe through the Black Sea port of Costanza, that remained open during the war, but only if they had a place – Palestine – that would take them in. Haj Amin Al-Husaini made sure they would not be allowed to land in Palestine.

The discussion of this is unique to Ibn Warraq. Also unique is his suggestion that it was Al-Husaini who, from 1948 to his death in 1973, kept the Islamic fundamentalist movement alive. He was the key figure linking the Muslim Brotherhood in Egypt to other Islamist groups. He helped organize the assassination of government officials deemed too secular. He also brought 4000 Nazi war criminals to the Middle East, helping them find jobs in the security and intelligence apparatus of several Arab states, and even converted some to Islam. It is both his role in the Holocaust, cutting off an escape route for Jews, and in his postwar work at the very center of the Islamist movement for 25 years, that only Ibn Warraq has discussed.

The book is well-sourced, with copious citations from Koran, hadith, sunna, and sira. Ibn Warraq allows the terrorist ideologues to speak for themselves, and at length. Everyone will have his own favorite examples of fanaticism: two of mine were the rant of Sayyid Qutb about American decadence, prompted by his 1951 attendance at a distinctly modest church square dance, and Khomeini’s remarkable speech about how he “spit on those” who denied the centrality of bloodshed in Islam. Finally, Ibn Warraq has read, thoroughly assimilated, and fittingly deployed, excerpts from dozens of scholars of Islam, from C. Snouck Hurgronje and Joseph Schacht to Michael Cook and Patricia Crone. The comprehensive bibliography is divided into primary and secondary sources, for those who wish to pursue the subject further.. It will be impossible for Muslim apologists to rebut any part of this incredible work. What they will do is try to have it ignored, or to dismiss a work of solid scholarship as merely an apostate’s “Islamophobia.” We must not let those efforts succeed. Buy and read this book, see that libraries order it, that those in the media and the government who make or influence policy are sent copies. For Ibn Warraq’s sake, and for our own.

PrevThe U.S. Congress and Vladimir Putin
What we learned when Sally Yates spoke her mindNext