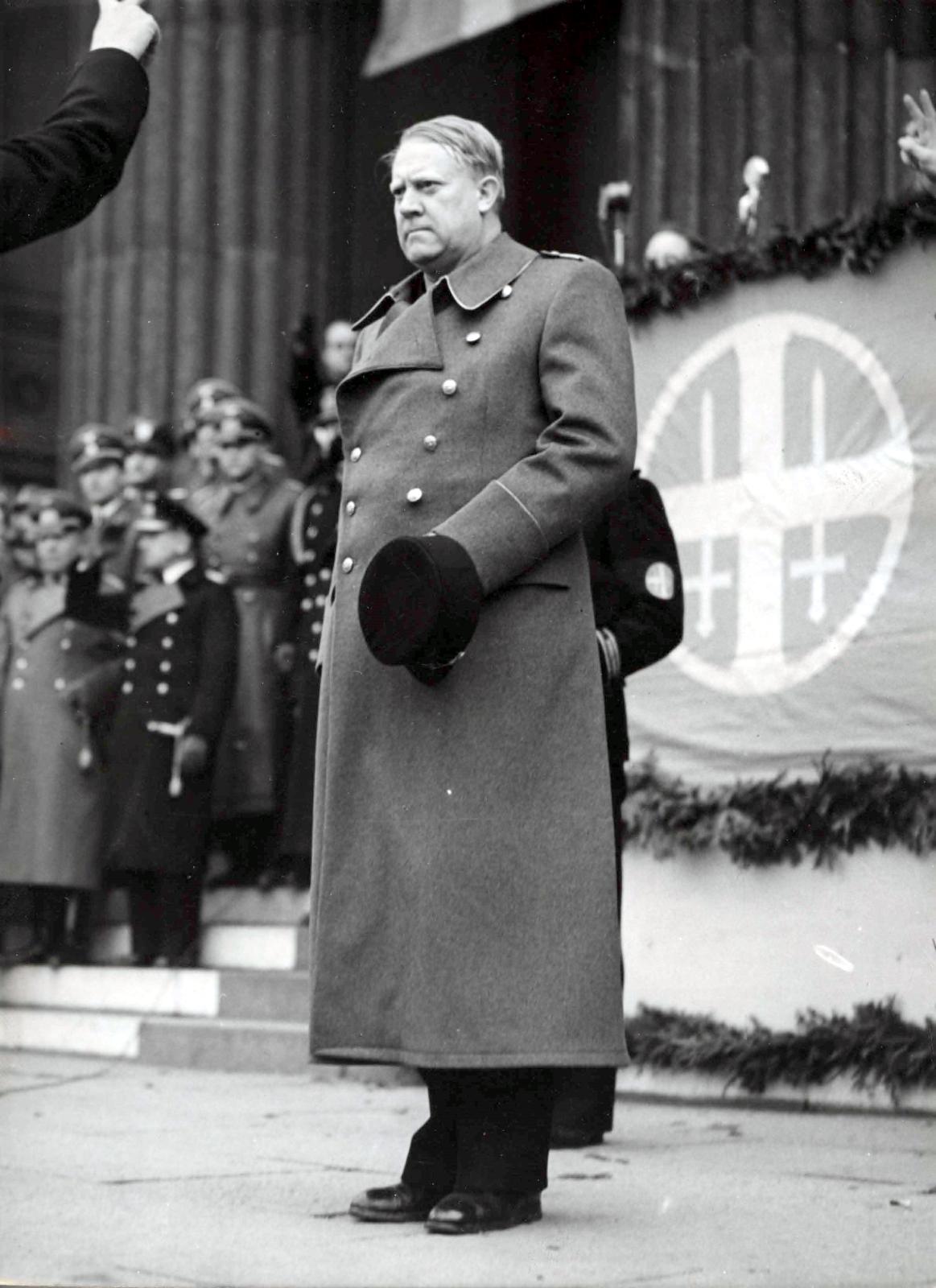 A number of books and films have told and made familiar the story of the invasion on April 9, 1940 and occupation of the country of Norway until Mat 8, 1945 by Nazi Germany during World War II. Germany quickly gained control of major coastal towns, but King Haakon VII and his government refused to surrender and went into exile in Britain. The country was controlled by an occupation force of 300,000 under the military commander General von Falkenhorst, and Adolf Hitler appointed the former Gauleiter Josef Terboven as head of the civilian occupation regime. Later, a puppet government headed by the pro-Nazi Vidkun Quisling was created. The SS and Gestapo functioned independently, using their normal methods of torture, murders, and secret burial grounds. The division of authority meant inefficiencies and confusion over policies and their implementation.

But the real power was determined by Hitler who had his own vision and agenda for Norway. That vision is discussed and new light is thrown on the German occupation by a brilliant, unusual and fascinating new book, Hitler’s Northern Utopia: Building the New Order in Occupied Norway, (Princeton University Press) by Despina Stratigakos, architectural historian, professor and vice-provost at the University of Buffalo. The book stemmed from her interest in learning of the secret plans of Adolf Hitler to build a city in occupied Norway. Exhibiting voluminous painstaking research and illuminated by copious photographs and drawings, the book clarifies that Hitler was interested in Norway not only for military reasons but also as a future member of a Nordic Empire, the northern part of the Greater German Reich, that would exhibit a national socialist landscape.

Norway, a neutral county in World War II, was strategically important for a number of reasons. It was crucial for secure routes for the shipment of iron ore from Swedish mines via Narvik. It was a vital asset in the Battle of the Atlantic as control of ice-free ports in Norway allowed use of sea power. German submarines and ships, and reconnaissance aircraft could operate over the North Atlantic. The battleship Tirpitz, center piece of the Baltic Fleet, was stationed in Norway for most of the war.

In addition, Norway was important during the War because it contained the heavy water plant, hydroelectric plant,  in the village of Rjukan, which could be used for production of nuclear weapons. After several attempts, the plant was sabotaged by Norwegian commandos and finally destroyed in February 1943.

Professor Stratigakos illustrates that Norway began to be seen by the Nazi occupiers as the testing ground for a new racial empire based on the collaboration of Nordic peoples and the power of Nordic blood. This would fulfill Hitler’s call for a Germanic empire that would unite Europe under control of the superior Germanic race. Hitler’s plan for Norway was a fantasy, a mixture of fact and illusion. German colonialization was intended to create a New Order of peacekeepers, a model Aryan society  beyond the Arctic circle, but it was also  supposed to be a process of bringing the two countries together.

One interesting example of this fantasy was the use made of Norway’s great artist, Edvard Munch whose work The Scream is one of the most iconic images of world art.  His work had been included in the 1937 Degenerate Art exhibition in Munich and was removed from German museums, but the Nazi occupation forces  lauded him as the great Nordic painter, and hosted his funeral in 1944. Another was Hitler’s proposal for a polar railway and the creation of small supply ships to help substitute for Norway’s insufficient shipping in the northern area.

Hitler’s plans were ambitious, detailed, and ideological as well as racist in nature. Ideologically, Norway, a racially superior state, was to be indoctrinated into a national socialist system. Practically, the country was to be transformed into a vast construction zone, with the building not only of military defenses and installations, part of the 5,000kilometer Atlantic Wall system of defense. but also of a large infrastructure, new highways and superhighways, railways, bridges, tunnels, docks, power stations, facilities for commercial and industrial uses, a whole network of public works. Hitler expanded his fantasy of the power of cars to integrate peoples. he ordered the creation of a superhighway from Trondheim through Oslo to the Swedish border. The building of an elaborate German style autobahn reflected the special status of Norway as a Nordic, racially pure, country.

About this contemplated and expensive infrastructure, two factors are surprising. One is the amount of time Hitler spent working on the exact location and the nature of these projects, presumably a distraction from his war time strategy. The other factor is that the projects were costly. Norway was the only occupied country in Europe where Germany invested more resources than it took.

The account by Stratigakos examines in detail German involvement in and plans in a number of activities: the building of a scenic highway from Trondheim to Berlin; the birth of Aryan babies to replenish Germany’s genetic stock; the Soldatenheime, cultural and recreational centers for Nazi  soldiers in remote areas; the rebuilding of 23 towns damaged in the invasion; the insistence of Hitler to build a mayor city outside of Trondheim.

For Hitler, Trondheim appeared to have a  special status, to be the northern  cultural capital of the Reich. By contrast, the Nazis were critical of Oslo, whose “melting pot” was not genuinely Norwegian, too full of women, and had no interest in the far north of the country

Hitler ordered Trondheim be made a first-class base appropriate for handling very large ships, and to become a major shipyard for ship building. But he also insisted that a new beautiful German city be built on the fjord near the shipyard. Housing 300,000 it would be the largest city in Norway. With a fine art gallery, the new city would be the northernmost cultural center of the Greater German Reich. It would become one of the architectural and cultural jewels of the Third Reich.

Hitler pressed for the building of Soldatenheime, soldiers homes, cultural and recreational centers for some of the 300,000 occupation force. He ordered 100 houses to be built, although only 20 were erected. There were economic problems  and lack  of raw material and transport, especially after the German invasion of the Soviet Union. They were to be built according to principles of German architecture.  Edgar Haller of the Labor Front was designated as head of the project, but there was lack of clarity and order over the projects, and friction between those involved, the Labor Front, the government departments, the military, and business contractors, with s disputes over construction, expenditure, and ownership. There were differences over the nature and size of the homes, which were intended to house 1,200 soldiers for rest and recreation.

The soldiers homes were intended to be a piece of Germany on foreign soil. They were designed to illustrate a new form of architecture, defining German identity. Models of a series of different types were developed. Hitler reviewed them and approved the final decision. The emphasis was on interiority, inward focus turning away from the outside world., expressing domesticity, as well as supposedly illustrating the German soul. In the building the Germans with technical experts developed new techniques, but there is no evidence that the soldier homes brought Germans and Norwegians together. In fact, natives were excluded from the homes of the occupiers.

In sexual relations between soldiers and native women, Norway was no different from other occupied countries. The Lebensborn progam begun by Heinrich Himmler in 1935 to increase the number of births of Aryan babies and increase the racial stock, was applied to Norway by Wilhelm Redies, SS and Gestapo leader. It functioned as maternity homes, nurseries, and orphanages, with a staff of both Germans and Norwegians. Many children, an estimate is of  between 10,000 and 12,000, fathered by Nazis, were born in the Lebensborn maternity facilities. . More than 500 children were living in Lebensborn homes in Norway at the end of the War.

Stratigakos’s book is a valuable commentary on the reality of Hitler’s fantasy for building a New Order in an occupied country. It was not a model of gemeinschaft, a community supposedly of social inclusion and equality, but rather an occupation of terror, and loss of freedom.

The Germans requisitioned homes, businesses, property, controlled  public expression, banned the singing of the Norwegian national anthem, the flying of the country’s flag, listening to the radio. Norway was involved in the Final Solution; of 2,173 Jews in the country, 775 were deported to their death, while two-thirds escaped to Britain and Sweden.

Since the end of the Nazi regime, controversy has raged over the personality of Hitler, did he act as a structuralist implementing and legitimizing instructions from below, or was he autonomous, an intentionalist in charge of political affairs, an autocratic dictator whose ideology, was the basis of his decisions. This book provides an opportunity to decide.