Albert Einstein Travels to Palestine and the Far East 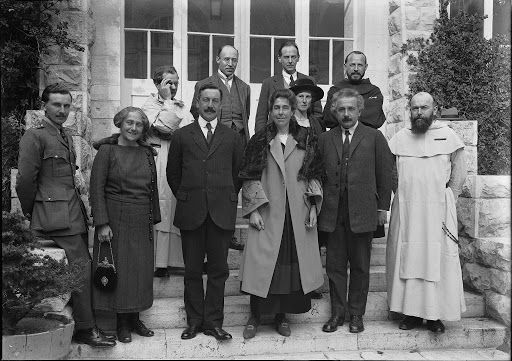 It is rewarding to think continually of those who were truly great. All the world is aware of and esteems the unique man with a distinctive mass of hair, unlit pipe in his mouth, the playful, sometimes absent-minded personality who loved playing the violin, and who is universally admired as the genius who developed the theory of relativity and is alluded to, sometimes in a T-shirt or tank top, by notices of his mass-energy equivalence formula E=mc2.  Curiously, Albert Einstein was not awarded the Nobel Prize for Physics in 1921 for relativity, but “for his services to theoretical physics, and especially for his discovery of the law of the photoelectric effect.”

Einstein was a scientific genius, a maker of 20th Century history, but he was also concerned in pragmatic fashion as a humanitatian with political and social issues, civil rights, gay rights, anti-militarism, pacifism, and Zionism. Few know of Einstein’s writings on travel, actually more of an activity, as he said, than befits a scholar, especially since he did not receive any Nobel awards for services on behalf of tourism.

That shortcoming may now be remedied with the publication of a fascinating narrative of his first main travels outside of Europe. For the last 20 years of his life, 1935-55, Einstein lived in a modest house in Princeton, N.J., a house still a private residence, unmarked by reference to its former distinguished owner, and not a museum. It is therefore fitting and gratifying that the Princeton University Press in June 2018 publishes The Travel Diaries of Albert Einstein, edited by Ze’ev Rosenkranz.

Throughout history, prominent figures among others have kept journals: Marcus Aurelius, Leonardo, Samuel Pepys, Charles Darwin, Mark Twain, Thomas Edison, Anne Frank are among the most well-known. Einstein’s handwritten travel diaries do not reach literary heights but they are a very valuable and indeed impressive presentation of immediate impressions and reflections during a five and half month trip, October 6, 1922 to March 12, 1923, with his then wife Elsa, to Hong Kong, Singapore, Japan, China, Palestine, and Spain.

The publication presents that daily experience with facsimiles of the original handwritten journal in German accompanied by English translation. To this has been added a few supplementary texts by Einstein. It is a handsomely produced work in which the editor has provided very useful annotations and information about the diaries and related events, though his long introduction has undue concern about the Orient and Orientalism. His references to the “wailing” rather than the “western” wall in Jerusalem inadvertently reveals his own political perspective.

Einstein was willing to undertake the long trip for various reasons. The idea had originated with the president of a Tokyo publishing house which would provide an honorarium, travel and lodging costs for a number of lectures in Japanese cities. Invitations from other countries, particularly China, and then Palestine and Spain followed. Einstein was also affected by the assassination of the German Jewish industrialist and foreign minister, Walter Rathenau, on June 22, 1922 in Berlin by a right wing extremist group, called Organization Consul. Among other things Rathenau has initiated the Treaty of Rapallo 1922, and the policy of rapprochement and trading with the Soviet Union. “I would not have thought,” said Einstein, “that hate, delusion, and ingratitude would go so far.” He appears to have thought that as a Jew he also was in physical danger, and wanted to get away from Berlin.

In his diaries Einstein wrote, usually a short account, and many in succinct form, of his daily experience, of people he encountered and places he visited, and also some surprisingly perceptive thoughts on art as well as on science. Some of the passages are elliptical, but all are infused with an honest and candid appraisal of his encounters. He alludes to things, places and people that he admires: the city of Toledo as a fairy tale; the “magnificent” painting by El Greco, actually the famous painting of the Count of Orgaz, in the Santo Tome church; the pictures in the Prado; the pretty landscape in Hong Kong; the Tokiugawa Palace; the temples in Japan with majestic Buddha figures; the Japanese Island Sea; the “picturesqe” little town of Nazareth. He was pleased by meetings with the Empress of Japan, the King of Spain, and fellow scientists.

However, his views, always honest, of the peoples and races were more mixed and more controversial. They are not an expression of or justification of “enlightened colonialism,” and are rarely sterotypes and never racist, but some of these private diaries are more forthrightly critical of customs and character, and certainly more candid than his public utterances.

A few examples can illustrate the point. In Colombo, Einstein was disturbed by the Indian natives living primitive lives in great filth and considerable stench, and far too penned up to allow any distinct existence for the individual. (October 28, 1922). The Chinese were diligent and frugal but have abundance of offspring. Regarding the Chinese in Hong Kong, Einstein curiously refers to them as industrious, filthy, lethargic people. Even the children  are spiritless and look lethargic (November 10, 1922). It would be a pity if these Chinese supplant all other races. Chinese workers there, hauling bricks uphill, are the most pitiful people on earth, cruelly oppressed and abused, treated worse than cattle (January 5, 1923).

Einstein had mixed views of Japan, and at times was puzzled since the country was mysterious to him. He found it was not easy to delve deeply into the Japanese mind. The intellectual needs of this nation, he wrote, seem to be weaker than their artistic ones, their natural disposition (December 5, 1922). They smile in a friendly manner, no one can fathom the feelings behind their guarded smile. Einstein tries to explain this by pointing out the “idiosyncratic Japanese tradition of not expressing feelings and emotions but sitting calm and even-tempered in all circumstances.”

However, in general Einstein praises Japan. Everything that truly originated from the country is delicate and joyful. He admired and cherished its artistic, social, and ethical traditions, superior over the European. Family ties are very much closer than in Europe, and extended families benefit from cohesion and mutual support. Einstein makes perceptive comments about Japanese music, especially on the mellow flute, and its fundamental difference from western music.

Einstein suggested in some ways the Japanese are superior to the west; the artful shaping of life, modesty, and unpretentiousness in personal needs, and the purity and calm of the Japanese soul. (Essay published January 1923.) The Japanese are similar to Italians in temperament (December 5, 1922), but even more refined, still entirely soaked in their artistic tradition, not nervous, full of humor.

Einstein also acutely, almost with foreknowledge, points out dangers in Japan: one is overpopulation which affects living conditions; the other is militarism. Japan required little military protection: his advice was for Japan to be linked to international cooperative organizations, not with military planning.

Insightful though his comments on the Far East may be, it is Einstein’s comments on Palestine, part flat terrain with very coarse vegitation, live trees, cactuses, orange trees, Arab villages and Jewish colonies that will attract most attention.

While he was visiting Hong Kong, Einstein was convinced (November 10, 1922) that Jews are a race, maintaining its purity in the last 1,500 years because the Jews of the Euphrates and Tigris are very similar to European Jews. In Palestine he clearly distinguished between the old Jewish traditions and change that was occuring. He commented on the Orthodox at the Jerusalem Western Wall, “obtuse ethnic brethren pray loudly, with their faces turned to the Wall, bend their bodies to and fro in a swaying motion… pitiful sight of people with a past but without a present.” The very dirty city of Jerusalem was swarming with the most disparate assortment of holy men and races, noisy and Oriental-exotic.

But Palestine was the land of new beginnings. He saw the Yishuv as European, not Levantine. He praises the colonial settlements, with its extremely likable people, especially Russians, and the lively Jewish life, and their tenacity in pursuit of their social ideal and carrying on the fight against malaria and hunger. This version of communism will not last forever but it will raise people of integrity. (February 12, 1923). Tel Aviv, the modern city, was different from Jerusalem with its lively economic and intellectual life. It would create people of integrity.

Einstein was evidently used for proganda effect by Zionist officials, but the Zionist cause was close to his heart. He was pleased to give a talk at the future site of the Hebrew University on Mount Scopus, and to help raise money in Singapore and elsewhere for it. He was optimistic that the University would provide a focus for the Jewish spirit, and be a rallying point for scholarship and thought.

During his stay in Palestine, Einstein met few Arab dignitaries, and did not comment in any real way on the Arab-Jewish conflict. He was however critical of Arab landowners who sold land to archeologists at horrendous prices.

In a text wriiten in April 24, 1923, after he had returned to Berlin, Einstein spoke warmly of his experience in Palestine and on the harmony and healthiness in the Jewish life there, the extraordinary will to work and determination, and self-sacrifice. He was optimistic and convinced that a unified community would develop there that would be a moral and spiritual center for Jews around the world. That was more important than economic achievement in Palestine.

Palestine (Israel), he concluded, will not solve the Jewish problem, but its revival will mean the liberation and revival of the soul of the Jewish people. It was for him a treasured experience to see the country during this period of rebirth and reinspiration. The rebirth of the Hebrew language was a splendid achievement and the founding of the Hebrew University was of primary importance. Einstein was a great scientist. He was also a proud Zionist.