An End to Toppling 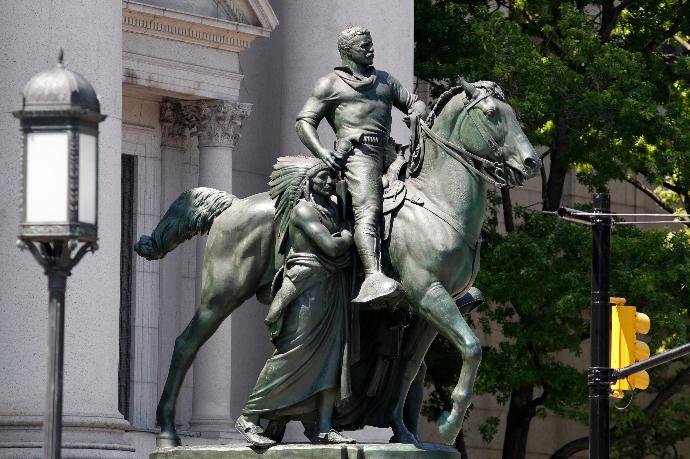 What a difference when your vision is clear and you see things as they really are. I used to be color blind, but events have brought the colors out.

A single incident, the asphyxiation of the African-American George Floyd has led to unprecedented scrutiny of the issue of race as well as of the behavior of police departments in the U.S. The incident has ignited demonstrations, with people around the world marching in protest against they see as racial injustice and racial profiling. The U.S. and all Western countries are probing their own history of prejudice and injustice against people of color, just as the MeToo movement has led to the re-evaluation of the extent of discrimination and violence against women. The focus of attention in countries has varied, but in all the underlying issue is abhorrence of slavery and colonialism. In all, there is a consideration of the imperfections of the past and present nature of societies. It should be pointed out , however, that the U.S., UK, and France are held to a standard higher than say China in its treatment of Tibetans or Indian Hindus in discrimination against the Muslims in their country.

The discussion of the race issue and protests of racial inequities have been helpful in indicating the extent of past and present discrimination, but many commentators have argued that the more violent protests, such as the toppling or debasing of monuments and statues, have not only been less helpful but have also distracted attention from crucial issues, and made progress on reforming the discrimination more difficult. The problem is further complicated by the consideration that extreme action such as the destruction of monuments may be an unjustifiable assault on the history and culture of the Western countries. The old motto is still relevant: don’t throw the baby out with the bathwater.

Passionate debate on the legacy of particular individuals is wholly appropriate but the dictates of violent protestors is not. Nothing but psychosis or delight in vandalism can justify the toppling in Madison, Wis,, of a statue of a man named Hans Christian Heg who in fact was an abolitionist who tried to end slavery during the Civil War.

This is not to deny an indefensible heritage or to excuse the rationale, given by religious and secular authorities, for discrimination. Martin Luther, for example, declared that the earthly could not survive unless some men were free and some were slaves. Karl Marx’s companion, Friedrich Engels in his work, Anti-Duhring, 1877, wrote “without slavery, no Greek state, no Greek art, and science, without slavery, no Roman empire. . …our whole economic, political, and intellectual development presupposes a state of things in which slavery was as necessary as it was universally recognized, without the slavery of antiquity or under socialism.”

Toppling of statues is not new. The 20th century Russian revolutionaries removed Emperor Alexander III, as well as the double headed eagle from the spire of the Kremlin. The German Nazis assassinated Engelbert Dollfuss, Chancellor of Austria, after the Anschluss and removed statues of him. Hitler and Stalin have almost entirely disappeared around the world.  So have Enver Hoxha in Albania, the Buddhas of Bamyan by the Taliban in March 2001, and Saddam Hussein since 2003.

Fashions of course change.  In Aden during communist control the statue of Queen Victoria was pulled down and replaced by Lenin. Now, Lenin is down and Victoria is back up. Indeed, who is up and who should be down? Mahatma Gandhi, mostly honored in the world, is precarious in Leicester, England where students have called him “anti-black racist.”

In the U.S., monuments to Confederacy leaders who advanced the concept of white supremacy have suffered punishment, but in some cases in U.S. the rationale for their destruction seems marginal if an ideology of supremacy is not central in their overall activity. It is well to examine the historical record of those , formerly seen as innocent of oppressive activity, but who have been recently criticized.  One such case is the statue of Theodore Roosevelt, 26th president, who may be removed from the front entrance of the American Museum of Natural History on Central Park West, NYC. The argument now is that Roosevelt as a commanding figure, on horseback, with Native American and African figures in subordinate positions on either side of him is a visual monument to white supremacy. The statue was meant to celebrate TR as a devoted naturalist, conservationist, and a connoisseur of natural history, but now has been seen as symbolic of racial hierarchy, with Western culture taming Native Americans and conquering the African continent.

The reasons for the attempted take down of Ulysses Grant in San Francisco are less obvious. He was gifted one slave, though he freed him in a year, lobbied for the15th Amendment, and prosecuted the KKK. On the other hand, President Andrew Jackson, victor at New Orleans that made him a national hero, and revered as an advocate of democracy, owned as many as 150 Native American, and black slaves at one point. He was responsible for the “Trail of Tears,” the forcible removal of the Cherokees in 1838 from their ancestral lands to relocation in Oklahoma territory. Should his image be on the $20 bill?

One of Jackson’s advisers was Francis Scott Key, author of the Star Spangled Banner,  which since 1931 has been the national anthem. The song is now controversial because Key, a very rich man, was a slave owner lawyer from a Maryland plantation family, whose words “Land of the free,” belie his own racist conception of American citizenship.

Britain has its hit list of 78 statues and memorials to go, a list that can be challenged. Among them are Jan Smuts, Sir Walter Raleigh, Sir Francis Drake, Thomas Carlyle, and Henry Morton Stanley, journalist known to history for his remark, “Dr. Livingstone, I presume.”  In addition, others are mentioned, Lord Holland whose statue in Holland Park was sprayed with red paint, owned 401 slaves in Jamaica, but asserted that he abhorred the slave trade. He justified his continued ownership of slaves in terms of the right to property.

The statue, veiled in November 2019 in Plymouth of Lady Astor, the first woman to become an M.P., was defaced with the word “Nazi.” She was anti-Catholic and antisemitic, and suspected by some of being a Nazi sympathizer.

Arguably, in all this toppling there is a risk of limiting if not destroying civic society, with the accompanying censorship, including self-censorship, insistence on ideological orthodoxy, and restraints on intellectual and academic freedom, absence of political pluralism, and intolerance with an unorthodox view becoming a target.

However, the present is now reviewing the past. London mayor Sadiq Khan has said that any statues or street names with links to slavery should be taken down.  London, he asserted, owes a large part of its wealth to the slave trade. A list has been published of 47,000 slave owners in Britain. Recognition of this is being acknowledged by two important firms, Lloyds and Greene King, owner of pubs and breweries. They said, in  June 2020, that their firms had been involved in the slave trade  in the 18th and 19th centuries, and that they would now make amends for what they called  this shameful period in British history.  Benjamin Greene, owner of a sugar cane plantation in the West Indies, owned 231 slaves. One of the founders of Lloyds was Simon Fraser, owner of 162 slaves and an estate in Domenica. The two firms promised to  recruit more blacks, Asians, minority groups, and apologized for past behavior.

Re-evaluation of history is now occurring in France with some surprises. The main candidates are Jean-Baptiste Colbert and Hubert Lyautey. Colbert, 17th century minister and advisor to Louis XIV , and advocate of “Colbertism,” state intervention for the economy and wealth, was  responsible for the Code Noir, the law for the treatment of slaves, which defined slavery and race in France’s colonial empire. His image was daubed with red paint, with words “state negrophobia.”

Marshal Hubert Lyautey, helped crush a rebellion by an anti- French bandit group on the Chinese  border,  served in Indochina, Madagascar, Morocco , and as Minister of War in World War I, signed the 1912 treaty of Fes that set up  French sovereignty over Morocco. In Lille, the statue of Louis Faidherbe, 19th century governor of Senegal, was  sprayed with  “murderer” and “colonialist.”

Most surprising has been the assault on Voltaire, Francois-Marie Arouet . When Jean-Paul Sartre  was to be arrested for civil disobedience, President  Charles de Gaulle prevented it, saying,  “You don’t arrest Voltaire.” However, the great author invested in the Companie des Indes which had a slave trading ship, Duc du Maine, that took slaves from Senegambia to Louisiana. One passage in his writings is particularly troubling, “We purchase our house slaves   only from among black men…this trade demonstrates our superiority.”

The controversy over statues, of criticism of white supremacy, and of the erasing of history continues. However, one practical benefit may be gained by the toppling that is going on. Material may be available for new statues  of white people in the U.S. more acceptable to the topplers and society as a whole.

A few candidates may be suggested.

Benny Goodman, great clarinetist from Chicago, who led one of the first, and most popular, of the integrated jazz groups, with two of the quartet being black musicians.

The Marx Brothers, for introducing the song, Swing low, sweet chariot, symbol of antislavery, in their film Room Service.

The Jewish Karnofsky family of New Orleans who befriended Louis Armstrong when he was 7, and helped buy him his first cornet. Armstrong is believed to have worn a necklace with the Star of David for the rest of his life.

The two young New Yorkers, Andrew Goodman 20 and Michael Schwerner 21 who went to help register voters in Mississippi and were murdered on June 21, 1964 by the KKK.

The 39 year old Viola Liuzzo, mother of five, from Detroit marched with Martin Luther King Jr. and helped shuttle black demonstrators between Selma and Montgomery, Alabama, was shot to death by KKK on March 26, 1965.

Then, of course, there is room on new pedestals for heroes of color and of women.

PrevSt Paul’s bomb plot: IS supporter Safiyya Shaikh ‘got cold feet’
The incident in West George Street #Glasgow is not being treated as terrorism.Next