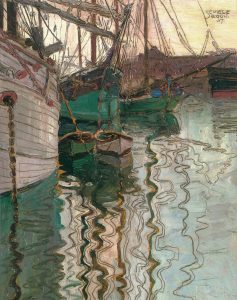 I would stay awhile, be content in doldrums’ latitudes, the
Sun glassy-eyed lord of placid sea, fire fixed upon equator…
But ropes grow taut to canvas’ pouting, sails furled unfurl
_____anew,
The wheel, to starboard, larboard turned, steers always
_____toward infinity…
Groans brig up heaves and through, time breaks o’er souls
_____in ferine howl.
A lookout shouts wide-eyed alarm, whose voice, bestrid ill
_____cyclone’s wind, flings down the mast as

We’ve long since told our stories -to each other—or
_____revealed anyway which things were fit to hear,
Have arrived at silences and knee pattings and repetition,
Affections ripened to a few griefs unuttered, gratuitous
_____smiles,
Learned to rub along together, become moorages in
_____fortune’s gales…
Like a play one loves, having come to know each page of
_____dialogue,

_____each euphony and discordance,

We act in an empty odeum, no applause save our own, two
_____old hauntings of the same ghost light,
Players still in this vaudeville house of shadows, caches of
_____ingénue and swain hitting marks…

…a usual February of rain, sleet, snow, a season weeping to
_____the lees…