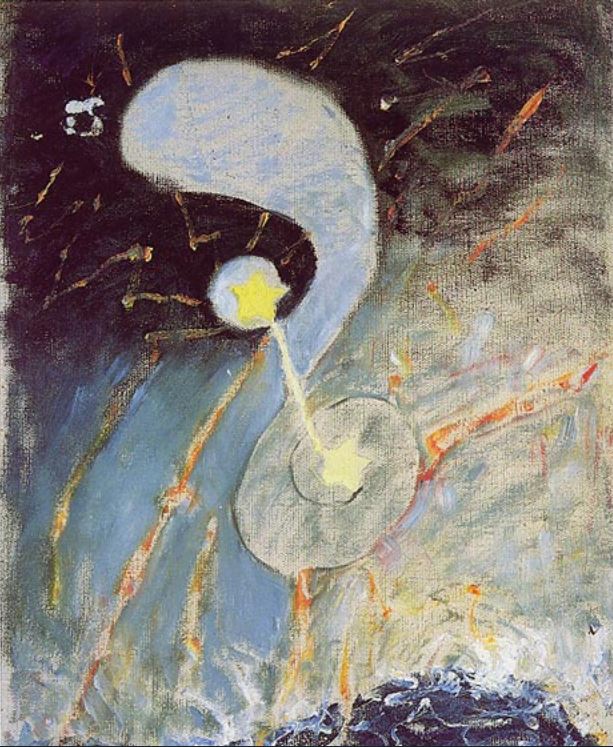 Properly read, the Bible is the most potent force for atheism ever conceived. —Isaac Asimov

Why is there something and not nothing, or how does something evolve out of nothing asked Sophocles in the 5th century BC; an unsettling question taken up by the philosopher Martin Heidegger in the 20th century in his Introduction to Metaphysics (1935). The query presupposes the existence of a creative intelligence (God or Prime Mover) that is the cause of everything that is, otherwise known as the universe. But the inquiry is doomed to St. Peter out as an reductio ad infinitum because if there is a God, we must ask how did It come into being, and then what came before It—and so on.

Epistemological dualism (light-dark, good-evil) proposes that from the very outset the wrong question has been asked and allowed to set the tone for metaphysics for more than two millennia. It beggars belief that philosophy and theology’s greatest thinkers have been ensnared in a cause and effect loop that has significantly diminished their sphere of influence, a development not helped by the ascendency of astrophysics (astronomy).

When it comes to accounting for everything that is, the principle or law of dualism proposes that evil does not originate or evolve out of the good or vice versa, that hot does not issue out of cold, and intelligence does not erupt out of dumbness, but rather they are co-dependent, co-existent. So where you have one, you simultaneously have the other.

Dualism is founded on the notion that whatever anything is, it has an opposite, or at a minimum something other than itself. It is impossible for there to be one of anything. The one implies the many. Singularity cannot exist without plurality. If there were only one single unvarying temperature of 27 Celsius, the very concept of temperature would disappear. In order to exist, 27 Celsius requires other ‘unlike’ temperatures. As a universal organizing principle, dualism knows no circumvention or eclipse. It is the basis of everything that is—and isn’t.

The nothingness out of which presumably issued the universe, a cause and effect we attribute to God or a Prime Mover, is an untenable premise. Inherent in nothing is something: you cannot have one without the other. We do not require a conventional God or Prime Mover to account for the universe. The universe, as a something, which implicates a nothing, or a void, has always been there. Just as dumb, non-sentient life and intelligence have always co-existed. Every concept presupposes its opposite or something unlike itself.

The reason it is so difficult to wrap the brain around the idea that there is no beginning or end to the universe is because everything we know of life, which includes all manifestations of life, begins and ends: the workday, the calendar year, friendships/relationships; even an obdurate cliff side will one day crumble into pebble and sand. But the universe itself has always been.

Therefore, we need not ask from out of what originates intelligence since it has always existed as a vital counterpoint to dumb nature, a fact which renders nul and void questions such as what does God expect of us or how does God move through us or why does God permit suffering.

Notwithstanding the limitations of human intelligence, the God-seeker’s primary challenge is to isolate the known operations of the universe with the view that they might infer the existence of a cosmic (creative and controlling) intelligence. In particular, the seeker, perhaps a metaphysician, an astronomer, will want to bring into unconcealment the relationship between the order and chaos that constitutes the very heartbeat of the universe. And beyond that, he will want to know if there is a correspondence between the notion of order and a creative intelligence.

Since Spinoza (1632-77), who introduced the concept of pantheism (deity as everything that is), the orbit of God has not been brought any closer to human understanding. Or, to cite Nietzsche: “we are all equidistant from God.” The only thing we can state for certain, in accordance with the principle of dualism, is that a creative intelligence exists in opposition to dumb nature since there cannot be one without the other.

The universe simultaneously features both chaos and order as co-dependents. To better understand the ordering principle that governs the universe, and the implied insufficiency of human intelligence to make it intelligible, we adduce a cell in a human foot which belongs to a body that is maneuvered by an intelligence (the mind) that it cannot begin to fathom. The foot that is made to move is forever dumb to the cause of its movements. We know as fact that a single human intelligence can be the cause of moving thousands of non-sentient legs and feet of other intelligences, such as when a field general commands his troops to take up strategic position on the battlefield, or when a business hub sends out a workforce. The feet in these massive movements cannot begin to comprehend the cause of their mobility.

Human beings can manipulate entities and introduce products into the world that never existed: a rock can yield a mineral that can be bent into a tool, a tree can be sculpted into a chair, an animal, such as a mule or camel, can be used as a conveyance, the hides refashioned into protective clothing. None can comprehend its radical transformation, that is the creative intelligence directing the purposeful activity.

Chaos and order are not separate, absolute entities. And while each operates within in its own singularity or particular law, both are in constant flux, the one, over time, transitioning into the other and vice versa. Their relationship or interdependence is not so much fixed as relative or quantum.

Let us hypothesize a theater where a dancer enters the stage and mimics having a seizure. If asked to describe the spectacle in terms of its aesthetic value, the viewer (reviewer) would characterize it as chaotic, disorderly and thoroughly displeasing to the eye. However, if a dozen dancers were to perform those exact same movements, the viewer would now describe the dance as meticulously choreographed and aesthetically pleasing. So depending on perspective, the exact same movements can represent both order and chaos.

The orderly expansion of the universe allows for entities being ripped out of their orbits and sucked into a black hole that explodes into a galaxy before once again expanding in an orderly manner. Are these macro-events purely random or is there a creative intelligence that produces, directs and presides over them?

Everything that exists is subject to its own particular law that derives from its particular environment, and this holds true for the universe. A rock’s erosion is a function of the elementals of wind, rain and sun. Even in a pure vacuum, which precludes changes in volume, the rock is subject to gravitational forces which determine its position at any given moment. But there is nothing internal in the rock that bears in the unfolding of its destiny. It has no DNA.

Organic entities are subject to both their DNA and environmental pressures. Deciduous trees lose their leaves as the hours of sunlight diminish or the temperature falls below zero: coniferous trees do not lose their leaves.

While animals do not have the capacity to choose, they possess an energy (an élan vital) that compels them to seek out environments favourable to survival.

Human beings, in perpetuity, are writing their own scripts while being subject to random events. At this stage of man’s evolution, human intelligence cannot determine whether the major cosmic events that have determined the nature of life on the planet earth are random or the work of a cosmic intelligence. Just as we don’t know if human life is an accident or the work of this intelligence. Our planet is subject to its own internal laws that govern its temperature and topography as well as external events such as another star’s gravitational pull, but its much used (and abused) surface tells the story of man’s very deliberate and measured intervention.

The sheep species (Ovis Aries) with which we are all familiar shares a common evolution that does not account for the existence of Dolly, the world’s first cloned sheep. Dolly owes its existence to a creative intelligence that it cannot begin to fathom while all the world’s other sheep are products of biological determinism. Does the example of Dolly and the species to which it belongs mirror the workings of the universe? Did we evolve from the apes, or like Dolly, are we—sentient, self-conscious—the product of a creative intelligence that presently lies beyond the purview of human inquiry?

As it concerns free choice in the unfolding of destiny of the species, the power and impotence of human intelligence are co-existent. Man has manipulated his environment in order to create a vast supply chain to feed upward of eight billion people. But he is powerless to affect the rotation of the earth. Does the creative intelligence that inheres in the universe similarly manipulate the entities of the cosmos? Is it random or deliberate when a galaxy collapses and disappears into a black hole? Since we exercise partial control over our lives and destiny of the  planet, is the universe, that includes a creative intelligence, subject to the same selective manipulations? We know that planet earth hosts many entities that are strictly passive, that is subject to the physical laws of their environment. Other entities are subject to the full force of human intelligence.

If we are presently incapable of isolating and/or assigning attributes to a cosmic intelligence, there is every reason to believe that this insufficiency, in accordance with the law of dualism, will, over time, produce a variant of itself. But for now, it seems that it is not necessary that human intelligence understand how and why and what moves this cosmic intelligence. Man fully grasps as an epistemological certainty that he is the only life form on the planet earth for whom dumb nature, in whose midst he dwells, exists, and that dumbness precludes a Creative Intelligence. He also knows experientially that knowledge, once identified as such, is subject, over time, to increase, so there is every reason to believe that human intelligence will one day be capable of identifying, as fact, something of the nature or essence of the universe and the Creative Intelligence it subsumes.

Among the many implicit directives that issue from the above speculations, one stands out: not in god, but in Mind we must trust.