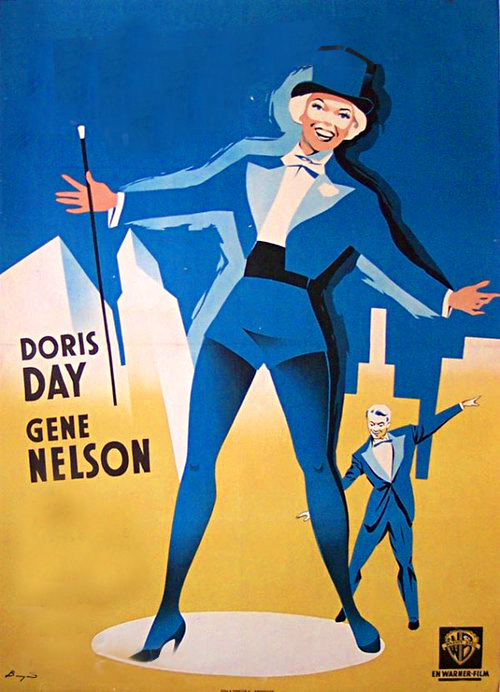 One evening a few weeks ago while reading a heavy book, I decided to switch on to Turner Classic Movies to see if some movie masterpiece was on that I hadn’t watched six times already and would qualify as being a cultural experience.

It turned out to be Lullaby of Broadway and, hesitating for only a moment, I closed the book and settled in for two hours of a weak plot, unconvincing characters and predestined happy ending. So much for moral resolution. However, I’m entering a plea of mitigating circumstances and not just because of the string of wonderful songs.

I don’t remember exactly when as a young boy I knew I wanted to emigrate to the US but I know the song “Lullaby of Broadway” played a role. For a six-year old, who was put firmly to bed at eight o’clock, to learn that, “when a Broadway baby says goodnight, it’s early in the morning,” was intoxicating.

It only got better: “Hushabye, I’ll buy you this and that, you’ll hear a daddy saying.” My daddy never said anything like that to me in the England of the Great Depression.

By the time another song on the same theme came along, “Bye, bye, baby, time to hit the road to dreamland . . . where the little cherubs trot,” I was far too worldly-wise to be fooled about what babies they were talking about. By then, however, I was addicted to Westerns and the song only cemented my determination to come here since I thought it said ‘where the little sheriffs trot.”

It is a cliché that all the laws Congress can dream up don’t influence history as much as a handful of poets. Or, these days, singers and movie directors. As I read once, in a thousand years of Roman history the only two events everyone knows are Julius Caesar’s assassination and Antony and Cleopatra’s love affair. It’s no coincidence that the world’s greatest playwright wrote about both of them and, though only a tiny fraction of people around the world have read the originals, those stories have seeped down to everyone else through books of every level of sophistication, paintings, plays, ballets, operas, movies, puppet shows and whatever else you are—as they say—into.

And so, with innumerable setbacks—I remember clearly the sense of impotence I felt on the day in 1967, when the pound was devalued so that all my savings automatically became worth 14 percent less in dollars—the vision stayed alive and eventually worked.

And it worked in classic immigrant style. I put in a full day at my desk in London on the Friday, wrote my usual column on soccer for the Sunday Telegraph on Saturday, flew to New York on Sunday and started my new job on Monday at nine.

On January 3, I will have been here 51 years and my gratitude has never dimmed, not simply because the US let me in but also because in all that time no one, despite my English accent, has ever asked if I am a citizen. It did in fact take me 26 years to become one—giving up that heritage (Shakespeare, Churchill, the Beatles) was hard to do—but I’m so glad I did.

I’m glad too to report that the promise of Lullaby of Broadway has been amply fulfilled: I’ve put a lot of babes to bed since I came here.*

* I have five children.