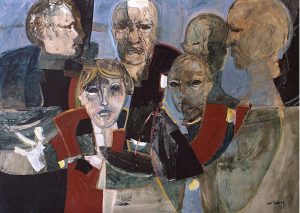 Have you noticed—how could you not have noticed? —that people nowadays are not extremely rich; movies aren’t thrilling nor speed excessive. Nowadays people are super rich, super exciting or super fast. It’s yet another milestone (millstone?) in the shrinkage of our everyday vocabulary.

Basic words are now beginning to sound exotic from lack of use. What’s the point of exquisite, commendable, gratifying, admirable, satisfying, gorgeous, charming, scrumptious, alluring, engaging, and so on—when super good so effortlessly takes their place?

These ugly words and expressions come and go like successive tidal waves. This morning, the stock question, “How are you today?” elicits the stock answer, ‘I’m good,’ (though often I wonder: but are you supergood?) Tomorrow there will be another catch-phrase that gets us by without having to think about what we mean.

The richness of the English language is one of the glories of civilization, brought about over the centuries by the mingling of the many cultures that have occupied the British Isles, where tribes pushing out from all over Eurasia have crowded together on reaching the impassable Atlantic: Celts with different dialects fought among themselves for supremacy, Romans subdued and exchanged words with them for six hundred years, Germanic migrants flooded in when the Roman soldiers left to protect their homeland and in turn fell to the Normans four hundred years later.

For hundreds more years, the ruling class (the super powerful, you might say) spoke a form of French, the well-educated and higher clergy spoke Latin, and the lower classes spoke an Anglo-Saxon amalgam. It’s that tension that gives the tricks Robin Hood played on the Shérif de Nottingham their savor: as always, in legend the bosses were stupid and overbearing, the underdogs mischievous, honest—and, in the end, the winners. Add in the Vikings of Norway and Denmark who didn’t just raid Britain but settled permanently in a large chunk of it, and you have a language capable of the most subtle distinctions. Take the most basic events such as the change of seasons: ‘the fall’ is German and Dutch, ‘autumn’ French and Latin.’ ‘Summer’ has these and faint Sanskrit origins too! This isn’t dead history: my mother’s grandfather, living in the Scottish Highlands, spoke no English, only Gaelic.

Crushing all that variety of speech into a nursery level of uniformity, which is what today’s talkers do, is self-inflicted imprisonment, as Eliza Doolittle’s escape from that imprisonment so radiantly demonstrates. Remember how, in My Fair Lady, the rine in Spine fell relentlessly on the pline until Professor Higgins inspired her with the realization that the right words could open up new ways of seeing life. “Just think what you’re dealing with: the majesty and grandeur of the English language,” he coaxed. “It’s the greatest possession we have. The noblest thoughts that ever flowed through the hearts of men are contained in its extraordinary, imaginative and musical mixtures of sounds. That’s what you’ve set yourself to conquer, Eliza. And conquer it you will.”

It’s a fairytale, of course, but there’s a gritty question hidden in it. Have we Eliza’s capacity for inspiration? Of course we do: we crave it. The fault is not in our stars but in our verbal slovenliness: at home, at work, in our top colleges. It’s fixable. All it needs is the conviction that literacy is not just a satisfying pastime but the key to understanding life. The words are there for the taking on any laptop.

Come on, America, conquer it you can.