A Christmas Wish: I Want to be Santa 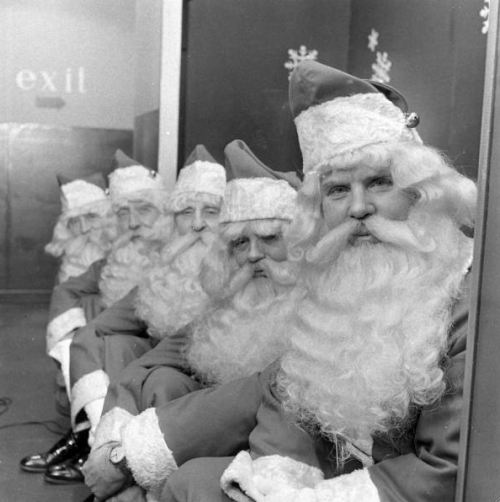 Harold Bindle used dreams to escape from his drab, routine, and boring life as a car wash assistant manager. Most of the employees spoke only Spanish and being bilingual had initially landed Bindle the job. That was five years ago. Bindle pushed the buzzer for the day to end prematurely—it had begun to rain heavily.

Bindle directed the six car wash laborers, “Punch out in ten minutes.” He repeated it in Spanish.

At times like this he felt they were lucky. They got to go home early when the weather negates people wanting their cars washed. He had to stay and close up no earlier than four o’clock.

Bindle also had to finish putting up the Christmas decorations. They were the same ones as last year. His favorites were the full-figure and facial posters of Santa Claus. Santa was his hero. Christmas was his favorite holiday. As a young child he believed in Santa and later venerated, as he does now, the concept of Santa as an intermediary in the gift-giving symbolizing the birth of Jesus Christ. He recalled his childhood Christmas experiences.

“Most kids use Superman or the Lone Ranger as heroes,” Bindle’s towering father said. He never extolled any virtue in his only child. “You hero-worship Santa Claus even after I told you that we, your mother and I, are the real Santa Claus.”

“I like Santa. He makes me feel good and makes others feel good. I especially like the Christmas music. Christmas Carols are my favorites.” Bindle’s reply was ignored by his father who walked away.

As a teenager, Bindle loved to visit the shopping malls and the larger department stores that had a live Santa Claus. He became a Santa voyeur. He dreamed that someday he too would be a temporary Santa Claus.

“We don’t have money to send you to college, Harold. I told you many times to enroll in the trade school instead of the high school college class.” Mr. Bindle did not take any responsibility for his son’s future.

At twenty-two Bindle was still working as a waiter in a college area mall restaurant. The Christmas season brought great tips, even from the college students. He envied the coeds even though his father’s booming admonitions would seem to resound in his head.

A man in a Santa suit sat at one of his tables. Bindle went to the Santa. He scrutinized the man. The beard looked real and the Santa Suit looked like a natural outfit—not a chintzy seasonal costume. “What’ll you have Santa?”

Santa produced a broad smile as he placed his order. “Harold, a cup of hot chocolate and a piece of apple pie with vanilla ice cream would be delightful.”

“You know me? I don’t recognize who you are in the Santa suit.”

Bindle smiled. “I’ll bring your food right away, Santa.” Bindle liked the man’s kindly manner. It fed into his adoration of the Santa Claus image.

As Santa paid his bill, he touched Bindle’s hand. “I’m giving you two tips today, Harold. The first is to follow your dreams. You dream of being Santa one day, don’t you?”

“Santa knows the dreams of those who are good at heart.” Santa stood up and handed Harold a twenty-dollar bill. “This is your second tip.”

“Which store do you work at, Santa? I’d like to see you again.” Bindle followed him to the door.

“I work in the North Pole, of course, and then I descend on the world at Christmas Time.” Santa left and disappeared into the thick shopping crowd.

Five years later Bindle, a car wash assistant manager, still had a dream of someday being a December Christmas Santa. He applied for the seasonal work but his gaunt appearance, thin stature, and soprano voice went against success at any job interview. During the holiday season, he still saw the Santa Claus of his restaurant experience nightly in his dreams. Tonight, as he lay looking at the peeling ceiling in his apartment, the face of his restaurant Santa appeared.

Bindle blinked his eyes. The image blinked back. “It’s you. How is it possible?”

“Harold, if you want to be a Santa Claus you must look like Santa Claus. Dress like me for your next Santa job interview, and your dream might happen.”

“I wish I could be Santa for every Christmas Day.”

He sat upright staring at the ceiling as Santa’s image faded. In the morning, Bindle had a sense of resolve. Today was his day off. He would use some of his savings to get a decent Santa suit. When he came from the shower into his bedroom, a Christmas-wrapped package was in the middle of his made bed. The package had bright green writing on a large Christmas gift label: FOR: Harold Bindle. FROM: Santa.

Harold adjusted his bathrobe and opened the package. Thoughts of how the gift arrived in his apartment never crossed his mind. “Wow! A Santa suit!” He inspected the suit. It had built-in padding and was obviously not a cheap costume. Bindle opened an envelope addressed to him. It was from the San Antonio Christian Services. He read it aloud.

Please wear this Santa Suit to the address below at noon today. If your appearance and demeanor are acceptable, we will want you for our Christmas Day Santa.

The letter was signed but Bindle was not familiar with the name.

The downtown San Antonio address was a storefront gift shop. Bindle went in wearing his Santa Claus outfit. The suit fit perfectly and filled out his body structure without a stuffed artificial look. There was something else that happened. People greeted him on the street as Santa, and when he replied his voice was different. The high pitch prepubescent squeaky tone was a resounding baritone. And now he faced a well-dressed mustached man for his job interview.

“You look magnificent Santa. Please read from this card.” The man waved his right hand for Harold to speak.

“You definitely are our Santa, Mr. Bindle. Report to the Christian Services building at 7AM Christmas Day. Here’s the address.” He handed Bindle a card.

Bindle was beside himself. He was going to be Santa. On Christmas Day he drove to the address and was directed to the Seniors Division. There were many people busy with packaging food and the air smelled of roasted turkey and ham. The man who had interviewed him led him to the rear of the building.

“Here’s your route, Santa. You’ll be driving this truck with one of our elves.” The panel truck was decorated to resemble a white sleigh. Decal reindeer murals were on each side panel. A huge “red nose” adorned the truck’s center grille.

A man dressed in a proper elf suit smiled. “Let’s go. We’ll be busy for the entire day.”

Bindle stopped at the truck and stared at the signage beneath the truck’s pictorial prancing sleigh team. “Meals on Wheels,” His booming Santa voice announced.

“Yes”, the manager said. “And if you do the great job I feel you may do, you can do it again every year.”

Harold Bindle was smiling from ear-to-ear. “Let’s go. Ho, Ho, Ho, the Seniors are waiting for their Christmas meals.”

Santa Bindle and his elf worked tirelessly the entire day. The truck’s radio resounded with Christmas Carols and both he and the recipients of his delivered Christmas meals exuded gratitude and yuletide spirit.

Harold Bindle’s dream had come true. For one day each year he would become the revered iconic hero of his dreams.