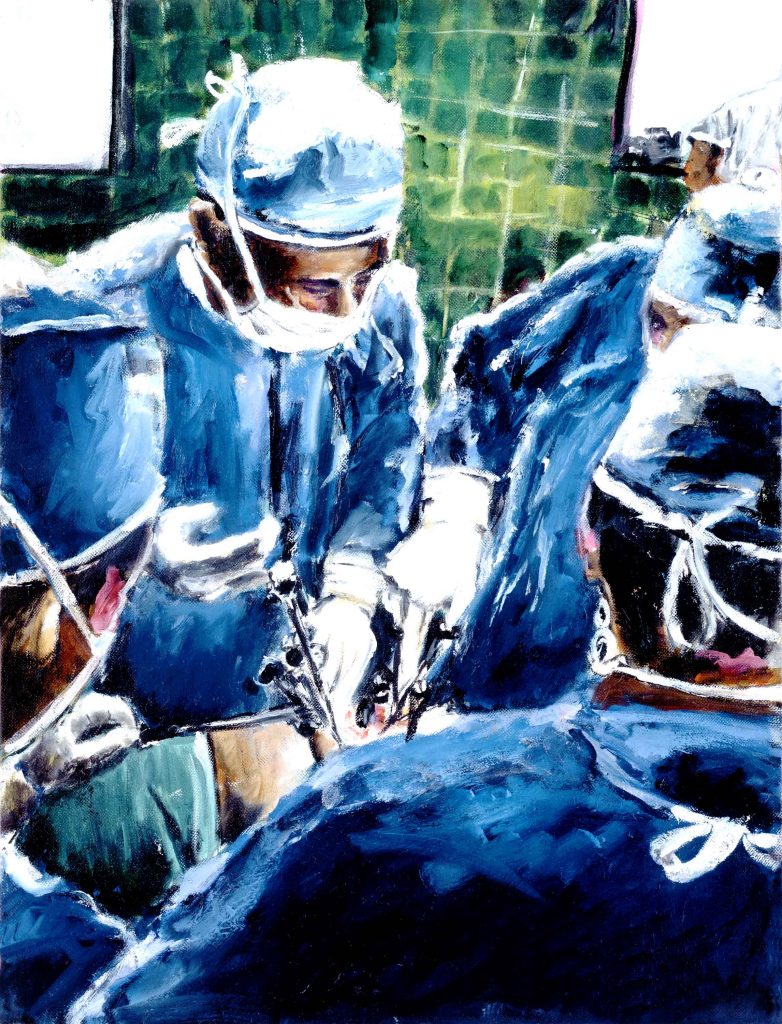 We lived in northern New York State at the Canadian border. The town of Massena was actually adjacent to the St. Lawrence River across from Cornwall, Canada. It was my turn to work on Thanksgiving. Not really work, but be on call. As an anesthesiologist, I had to be available should a surgical or medical emergency occur that required the immediate service of my specialty.

“We’re having guests for dinner and you have to put yourself on call?” My wife Barbara’s voice had an irritable edge.

“I didn’t work last Thanksgiving, and it’s only fair that I take it this year.”

My teenage daughter Tracy chimed in, “You’re the head of the department. You shouldn’t have to work on holidays,”

Barbara never forgot the situations that plucked me from family events. She spoke while working from the kitchen, “There could be a traffic accident, an emergency C-section, or some crazy drunk from the Indian reservation could run amok and break a bone.”

Massena Memorial Hospital served a large Indian reservation not far away. “That Indian thing happened a year ago and it wasn’t on any holiday,” I replied.

My son Michael spoke up next with a grin on his face, “What about that farmer who got kicked in the testicles by a cow he was milking. That happened two Thanksgivings ago and you and Dr. Linden were in the operating room the whole afternoon.”

I wasn’t going to win any argument. The smell of the turkey cooking, mixed in with the Italian pasta sauce simmering for the Lasagna, mellowed everyone out. Barbara turned on the TV for the annual Macy’s Thanksgiving Day parade.

“Look, it’s starting to snow,” Tracy announced and pointed to the window.

I called the hospital and verified that no one was in labor and the emergency room had no candidates for surgery or anesthesia.

At two in the afternoon, the table was set and the guests were one of my children’s teenage friends. Their mother was helping Barbara organize the side dishes and their father, my boys, and I were talking football favorites for an upcoming evening game. The snow was still falling as we all sat down to the first course of turkey. The TV was off and we were all silent when we heard a sound that made my heart skip a beat.

My oldest son David said it first, “A helicopter.”

The sound got louder as the helicopter flew right over our house to the only heliport in town–the hospital. Barbara looked at me while passing the side dishes.

The phone rang. My kids collectively said, “Oh, no.”

Everyone was quiet while I answered the call. I listened and turned away from the prying ears and anticipating eyes. I gave a few orders to the ER nurse for what I was going to need and hung up. I excused myself as I went to the coat closet just as the doorbell rang and opened the door to Massena Police Sergeant Ralph Gibbons, stamping snow from his boots.

“You ready Doc? I got the four-wheel drive SUV cruiser.” Reflections from the blue, red, and white flashing lights created a Christmas-light effect on the falling snow. Gibbons stuck his head into the doorway and yelled in. “I’ll bring him back later. Smells good in there, Happy Thanksgiving.”

The ER driveway was crowded with police vehicles, an ambulance, and a fire truck. The fire truck was required whenever a helicopter arrived. I took my coat off as I entered the ER and was directed to a curtained stall. Five nurses and the ER doctor were still working on the unconscious patient, Mr. Ted Kendall. He was the manager of Massena’s largest supermarket. I could smell alcohol fumes coming from Ted’s erratic labored breathing.

The ER doctor taped a second IV in place and looked up. “I’m glad to see you. We have to get Ted to the Watertown Hospital ASAP. The neurosurgeon is waiting on us. Ted had too much Turkey Day cheer and fell over the loft rail in his house. The only injury was to his head. Watertown wants him hyperventilated to decrease cerebral blood flow and prevent brain swelling. I couldn’t get the endotracheal tube in.”

Massena Memorial Hospital didn’t have a neurosurgeon. Ted’s right eye pupil was dilated and I saw an ominous sign of brain swelling with the ophthalmoscope. “Get a Foley catheter in his bladder, hang up a unit of mannitol, and give 10mg of dexamethasone IV stat. It’ll shrink down the brain but he’ll be peeing out buckets.”

The senior ER nurse spoke to the recording nurse. “His breathing’s more shallow. The oxygen saturation is going down.”

“Hand me the nasal endotracheal tube,” I ordered. The ER Doc had tried to place the endo-tube by mouth, which was a mistake. I could see some of Ted’s teeth were loosened from the effort. I lubricated the nasal endo tube and passed it into Ted’s right nostril placing my ear at the other end of the tube. I advanced the tube feeling Ted’s breath blow against my ear. Ted’s breath at my ear became maximal. Timing now was crucial. The epiglottis was open uncovering the tracheal orifice. I quickly advanced the tube three inches. Ted began coughing–the tube was in. I attached the Ambu bag and began breathing rapidly for him. Blowing off carbon dioxide would also shrink the brain and further decrease any bleeding inside his head.

I watched the litter team go to the helicopter, which had just started up. Swirls of snow were blowing down and up like a reverse tornado. “Sergeant Gibbons, how about the ride home?”

We headed for the patrol car when a nurse grabbed me. “Dr. Glassman, you have to go to the chopper. Ted regained consciousness and pulled out the endo tube. They need you right away.”

I groaned. I had vowed never to go into a helicopter again after a near death experience in a Medivac helicopter during my Vietnam service in the Navy. Sergeant Gibbons pushed me forward. The positive side of Ted waking up was that our efforts were working. I had the helo-team secure head, arm, and leg restraints. I tried reassuring Ted who was now shouting non-Thanksgiving expletives. I got the tube back without difficulty, taped it in place, and drew up a sedative for injection into Ted’s IV.

The flight paramedic clutched my shoulder. “How about coming with us to Watertown?”

“Just keep him restrained, talk to him, reassure him, and give him this in his IV, right now. It’ll sedate him for the trip. You’ll have to breathe for him with the Ambubag. The anesthesiologist at Watertown will reverse the medication so the neuro guy can do his exam. I can’t go. I’m on call here.”

I arrived home while everyone was poised for dessert. I apologized to everyone. The teens’ parents nodded understanding.

Barbara set my warmed meal down. “I have a plate for you and then we’ll all have the pies together. You had us worried.”

“Yeah, dad,” my daughter and her friend seemed animated. She continued,“We watched it on television. The news guy talked about what you did in the ER and then we saw you run into the helicopter. He told what happened again. He said Mr. Kendall and the town of Massena should be thankful to have people like you standing watch on Thanksgiving.”

I had a mouthful of turkey and couldn’t respond. Thankful? I’m grateful that they were not Ted Kendall, and gave thanks that I didn’t have to ride in the helicopter through the snowstorm to Watertown. It was a hundred miles away and I would have had no immediate ride back. I would be abandoning my family, friends, and the entire town of Massena would be without an anesthesiologist. I could hardly wait for desert.

I found out a few days later that Mr. Kendall’s surgery was successful. He’d be alive and well for many more Thanksgivings to come. He always gives me a hug whenever I see him. It makes me appreciative of those of us who have to work away from our families on holidays.