A Time for Many Words

It could have been the beach at Aliki, or maybe it was Antikrya. It does not matter any more. I do not remember if it is one, or the other. It was a small village on the northern coast of the Gulf of Corinth. It was July, 1981. Our son Ben was one year old.

We had driven to the gulf from Delphi, where we had visited the ruins of the oracle. Had I been wise, I would have asked the oracle, “Will my son remember Hellas or, is it his father’s futile interest?” Unfortunately, the oracle had stopped talking more than 1500 years ago.

Ben was asleep in his baby seat when we arrived. My wife Mira and I parked the car near the edge of the water, beside some trees. The sea was calm. A boat was turned on its side. There was a small building and some picnic chairs. We went inside the building and there was a Greek woman, maybe 20 years older than us tending one of those old-fashioned Greek kitchens with Ottoman style copper pots hanging on the walls, uncooked squid and lamb on the side, vegetables and garlic.

It was dark inside, like the interior of a Byzantine church and the woman’s face was lit up by the late afternoon sun like an Icon. She spoke no English but through the international sign language of women in the kitchen, Mira managed to make her understand that we wanted a Greek salad and barbequed squid.

We left the chef to her work and sat at the picnic table. We opened the car doors. We put Ben on the back seat, covered him with a blanket so we could see him and the view at the same time.

The beach went on for miles. The water was clear and calm and got deeper, slowly and gradually, as you looked out across the bay. I could see the stones under the water, a few feet offshore. On the other shore, miles away were large hills, actually mountains in bold shapes. The sky was azure blue, cloudless. There was no wind upon the water and the only noise was the quiet lapping of the sea near our feet, the one where Odysseus once roamed.

The landscape had not changed much since ancient times. I realized that it had now received millions of tourists who love the Greek landscape and identify with its ancient culture. Nearby there were and are Byzantine churches that were built when the Christian Emperors ruled from Constantinople. Before that, the Romans ruled here for centuries, then Alexander ruled and, long before him, Corinth was an independent city state, a “polis” in ancient Greek. In classical times the city of Corinth was famous for its temple prostitutes.

The food came and the chef stood near us smiling, as we ate everything she had made with gusto. I looked at our sleeping son and my mind began to wander. I looked at him again. What will he become and what will become of him? And I asked myself will he love the things that I love? There was no guarantee of that.

A quarter of a century later, Ben was at University. He was reading Plato, Aristotle, Thucydides, Herodotus, Hesiod and Homer; all of the authors I loved so much. I had read about the Peloponnesian war when my wife was pregnant with him, sitting in Haifa looking at this same “wine dark sea” as we were looking, at when we had that memorable dinner. 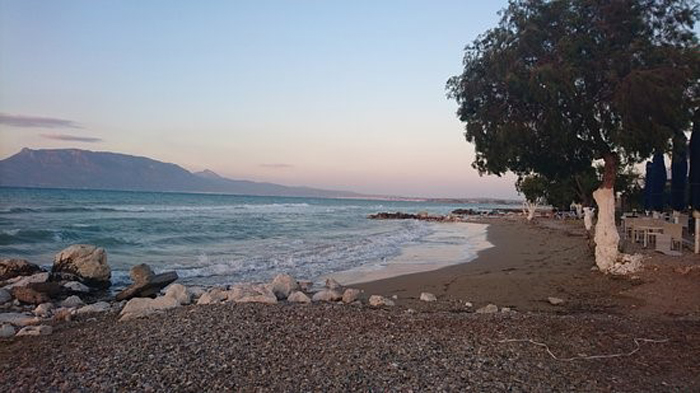 Ben has never stopped reading the ancient Greeks. Homer, the plays and the philosophers are his daily bread. I take some small credit for his interest and, like Mentor, only tried to steer him in the right direction. Not a day goes by when he does not read or think about the ancient Greeks, perhaps more so than I. For me they are people from long ago. For him, they are alive.

Only after we had leisurely finished our meal did Ben wake up. He had not quite begun to walk, but he managed to go over to the boat and pile pebbles in a row across bottom of the boat as he stood against the upturned bow. He had touched the same stones that the ancients had touched and soon we were on the road back to Athens. Had the stones left a mark?

Homer once wrote, “There is a time of many words and there is also a time of sleep.” Ben began to talk very soon after. And like the ancients he so admires, he has never stopped. There had been no need to consult the oracle.