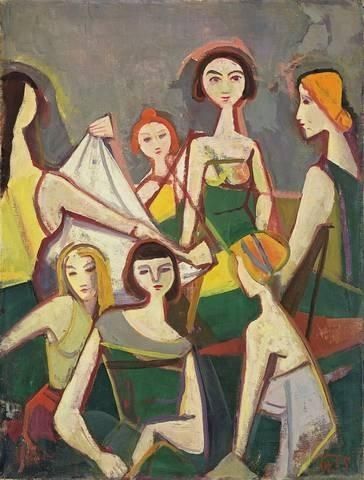 At sixteen, Michael Waxman was a Junior in high school, got his driver’s license, and was a full member of the Stephen S. Wise AZA[1] in Medford, Massachusetts.

Michael never really connected with his Jewishness until he started high school. With his Jewish name he was approached and absorbed into the Jewish Zionist[2] teenage fraternity called AZA. The letters AZA stood for the first and last Hebrew alphabet letters, Aleph Zadik Aleph. The female counterpart was the B’nai Brith girls. Christian adolescents had their groups known as the Demolay for boys, and, their opposite, the Rainbow Girls.

“Michael, look at that sign.” Mrs. Waxman motioned for her son to face the main entrance of a Medford Square department store. They were waiting for a bus to take them home.

Michael stared up at the huge red neon sign displaying the name, GORIN’S, in capital letters. Red neon would first illuminate only the, “GO”, replaced by an, “IN”, and end in a glorious completion of radiant red, GORIN’S, which after a few seconds blinked on-and-off three times: GORIN’S, GORIN’S, GORIN’S. “Yeah mom, the sign is awesome.”

“No, that sign Michael,” his mother pointed and read it aloud, “PART TIME STOCK-BOY WANTED. You just got your driver’s license, and this will be a good first job for you. It’ll pay for your car insurance, gas, and give you spending money.”

“Mom, this store sells mostly girl stuff. They probably won’t want me.” Michael looked around and saw a few of his AZA friends heading for the bus stop. Not wanting to be seen  waiting with his mother, he eagerly followed her into Gorin’s.

Mr. Henry Rankin, the store manager, smiled at them, “Let me tell you about what a stock-boy does. First, there are maintenance chores like sweeping the floor and the sidewalk outside the two entrances. In winter of course, you do snow removal. Helping the sales personnel with the inventory occurs daily. The most important thing you’ll do, is help our regional window-dresser.”

“Yes, Gorin’s has a regional man who goes to all our stores making sure our windows and mannequins are showing and advertising our merchandise in a professional and enticing way. At first you’ll work together and then you’ll be on your own.”

Rankin looked at him. “What do you think, Michael?”

“I was having doubts until you said I’d learn about the window stuff from one of Gorin’s staff. The rest of the duties should be no problem.”

Monday was a sunny, fair September morning and day. Michael’s fear of student peers seeing him dressing female dummies, became a reality. A group of his fellow AZA members stood talking and waiting at the bus stop. One of them, big Bibsy Shapiro, cast a glance into Gorin’s lingerie window display and let out a shriek.

“Hey guys, look who’s doin’ what to them statue parts!”

Harry Darmin, a good friend, couldn’t stop laughing and then shouted, “If you get a live date you won’t have to grab at plaster boobs, Michael.”

Dreading Tuesday was worse than dreading Monday. He had to face his friends in school and be seen in the windows later.

Percy Dorfman was in his science class. “Hey Michael, I saw you workin in Gorin’s window yesterday.”

Dorfman motioned him closer. “I have an important question. Is it hard to take those bras off the busts?”

Michael forced a smile, “Naw, I can do it with one hand.”

Later, at home, his father asked about his friends’ commentary.

“Dad, I think their teasing mellowed out, but I’m wary of going to the Sunday AZA meeting.”

“Michael, if you don’t show up, they might think you can’t take it. Oh, by the way, I need the car Sunday. Have one of the members take you to the meeting.”

Michael’s thoughts were worse than acne as he walked to Gorin’s after school. He whispered softly as he faced the sidewalk. “How can I face the guys on Sunday?”

Michael bumped into one of his best friends, Meyer Lifshitz, “Hi Meyer.”

“I have the family car Sunday morning. I’ll give you a lift.”

They exchanged small talk about school. Suddenly Bibsy became animated, “Hey Michael, we’ve been watching you in Gorin’s window. You’re gettin pretty good. Look, I have nothing much to say for my AZA Social Committee report. I had an idea after talking to Percy Dorfman.”

The three high schoolers talked about Bibsy’s plan and agreed it might be a good diversion from their usual house party with ugly girls Social Committee summations.

Michael actually looked forward to taking part in the AZA meeting agenda. Sunday Morning Lifshitz honked his horn. Michael ran out the door and jumped into the car.

About fifteen cars were parked at the Temple Shalom Annex for the AZA meeting. A lot of eyes were on Michael as he entered with Lifshitz.

Aleph Shapiro was a high school senior and a linebacker on the football team. He stood tall and waved down all the boos and raspberries when he began speaking.

“Okay, you guys, I know the Chelsea B’nai Brith house party didn’t come off well. Those girls eat too much chocolate and never see a dermatologist.”

“Wait, wait Alephs, today I’m departing from the usual, and turning my report into a workshop. Everyone is required to participate. Will Aleph Waxman step up to the table please? Aleph Lifshitz and Aleph Dorfman will assist in this demonstration. No one will be allowed to leave the meeting unless they successfully comply with the task at hand with finesse and dexterity. Aleph Waxman, if you please.”

Michael went to the front of the group as Aleph Lifshitz plopped the large plastic bag onto the table. Michael addressed the membership, “My fellow Alephs, I demand your undivided attention. Aleph Lifshitz, may I have our subject from the bag.”

Lifshitz removed a female bust and centered it on the table next to Michael. Michael broke the ensuing silence, “As you can plainly see fellow Alephs, I have before you a size 36 C female bosom.”

Instant cheers, applause, and banging chairs on the floor ensued.

“Gentlemen please, there’s more. Aleph Dorfman if you will.”

Dorfman extracted a smaller bag from the large one and emptied it onto the table.

Michael continued his presentation, “We have three types of bras classified not by the size of the breast, but rather by the number of hooks required to don such devices.” Aleph Lifshitz held up a one-hook garment, Aleph Dorfman a two-hooker, and Michael presented a three-hooker. He continued, “I have recently come into expertise of a technique for one-handed removal of such items in my employ as an artistic window dresser at Gorin’s Department Store. While my job necessitates putting these bras on busty busts, taking them off with one hand from the front requires a reach around to the back. Since all bra hooks are designed for right-handed application, all Alephs will use their right hand to take them off.” Michael faced his three-hooker bust and moved his right hand around to touch the hooks. “The first action is to insert your right thumb under the firm band which contains the receiving ‘eyes’ for the hooks. Simple thumb insertion creates a large space to leverage the separate hooks, one-at-a-time, quickly and adroitly, with the index finger only.” Michael demonstrated and the cheer noise level was of Guinness Record status. “I will now do the same on the other two sizes.”

Aleph Shapiro took the floor again. “All Alephs, please line up alphabetically. All must successfully demonstrate hook-and-eye release from the frontal approach. You may not leave the meeting without such certification by Aleph Waxman.”

Michael Waxman has never forgotten his first real job at Gorin’s nor its consequences. Even to this day, those Medford High School AZA members recall with great reverence that unique training workshop by Aleph Shapiro’s Social Committee.

[1] Founded in 1924 in Omaha, Nebraska, AZA, standing for the Hebrew letters Aleph Zadik Aleph, were so used because Jewish students were not allowed membership in Greek fraternities. Unlike the college fraternities which had many variations of the Greek alphabet, AZA uses only the three Hebrew letters. AZA enrollment was for high school teenagers as colleges continue to charter only the Greek orders. To distinguish between various AZA groups, a prefix using their meeting site and a suffix denoting a historical Zionist was often used. Thus, Michael Waxman and Peter Glassman were both, coincidentally, members of the Medford Rabbi Stephan S. Wise Chapter of AZA. Rabbi Wise was an AZA founder and reform Rabbi Zionist leader who died in 1949, the year the State of Israel was established and recognized as an independent country by the United Nations.

[2] Zionism is the nationalist movement of the Jewish people that espouses the re-establishment of and support for the Jewish State of Israel.

PrevA Bird of Prey
An Auguring of Winter to ComeNext