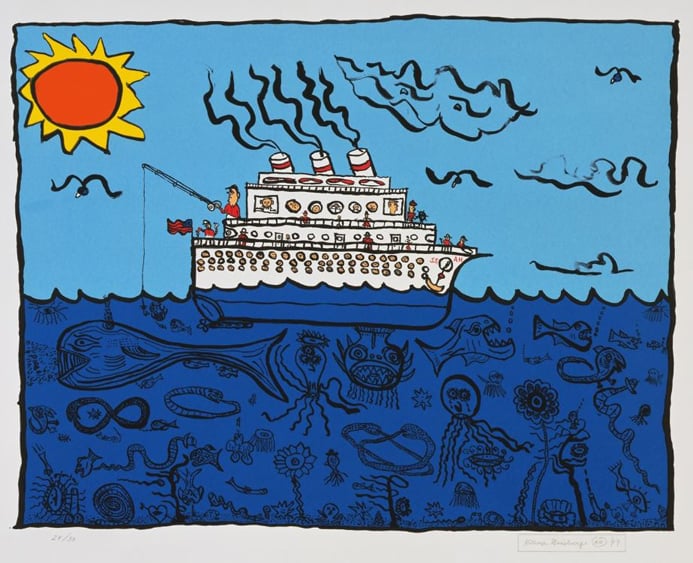 In 1966, the year that the Cultural Revolution began, the poet Allen Ginsberg wrote in “Hiway Poesy,” “It’ll be a relief when the Chinese take over Texas” (CP 398). In the poem “Eclogue,” written in Fall 1970 (middle of the Cultural Revolution), Ginsberg writes, “In a thousand years, if there’s History/America’ll be remembered as a nasty little Country/ full of pricks” but he contrasts this negativity with a vote for Mao, “‘Chairman Mao’ for all his politics/ head of a billion folk, important old & huge” (CP 550). America itself is the enemy in his poem, “Wichita Vortex Sutra,” written in 1966. In it, Ginsberg is angry that America, “sustains the aging tyranny of Chiang in silent Taipei City” (CP 411).

One can find similar hatred of Chiang Kai-Shek in Charles Olson’s Maximus Poems. Chiang Kai-Shek’s wife is described as a cold fish, and as a diva who insisted on having the best at the White House:

George Butterick reiterates that this is Madame Kai-Shek in his Guide to the Maximus Poems and says, “Rumors of her imperious demands and extravagance during her first visit were plentiful” (58). Her first visit was in 1943 to ask for help during the war effort.

Pressure was being exerted against the liberal order of Chiang Kai-Shek in favor of Chairman Mao. We now know that this was a mistake, but it was one actively pushed by the Washington Post and the New York Times. Whittaker Chambers attempted to out Alger Hiss and others who were working in the Department of Treasury and who were secretly funneling money to Mao and holding up money that was ear-marked for Chiang Kai-Shek. Chambers writes, “It is certain that, between the years 1930 and 1948, a group of almost unknown men or women, Communists or close fellow travelers, or their dupes, working in the United States Government … or working in the press, affected the future of every American now alive … their activities, if only in promoting the triumph of communism in China, have decisively changed the history of Asia, of the United States, and therefore, of the world … it is about to close its 2000-year-old experience of Christian civilization” (277).

The dreary details of the transfer of power to the Maoists by the insiders in the State Department can be found. Special Counsel, by William A. Rushel, gives us some details. At this time, Rushel writes, “The whole tremendous apparatus of world communism was turned against Nationalist China … The Treasury clique was led by Harry Dexter White, one of the few persons to have the distinction of being named under oath by both Whittaker Chambers and Elizabeth Bentley as a communist espionage agent” (83). Their job was to tank the nationalist currency in China by slow-walking the gold that Congress had approved.

Many were led to believe by our mainstream media that the Chinese communist insurgency in the 1940s was popular inside that country, but it was actually fed by communist agents inside our own government. This is what Whittaker Chambers argued. Ginsberg himself said that if he wrote poetry, it was because he first read the newspapers. One of the great reasons that Plato wanted to reject the poets from his ideal republic was that they were imitators.

The song and dance of the Deep State were inscribed by Charles Olson (who worked for a forerunner of the CIA called OAS) and by Allen Ginsberg.  They were both what Lenin would have called useful idiots. The massive apparatus of world communism suffered a slight setback in 1989 when the countries of Eastern Europe dumped their dictators and joined classical liberalism.  But the mesmerizing totalitarians are back and are often helped by our poets and academics.  Can anything help us to turn against the massive war machine of communism and its allies within academia and the art world?  Why does the government fund the arts if not in order to control them?

Anarchist Max Stirner wrote in 1844, a few years before the Communist Manifesto appeared in 1848, “Communism rightly revolts against the pressure that I experience from individual proprietors; but still more horrible is the might that it puts into the hands of the collectivity” (Ego and Its Own, 257). Many have denounced communism, none more so than those who lived through it.  Early on, Stirner saw through the blandishments of the Deep State. However, this news never quite penetrates through the miasma of the left to reorient Marx’s endless epigones and their attempts to create a totalitarian society.

Kirby Olson is a tenured English professor at SUNY-Delhi in the western Catskills. His books include a novel (Temping), about an English professor who starts a circus in Finland; a book of poems entitled Christmas at Rockefeller Center</em>; and several books of literary criticism about ludic surrealists. He is currently working on a memoir of his time spent at Naropa Institute studying with Allen Ginsberg and William S. Burroughs.