All’s Well and Some Discontents 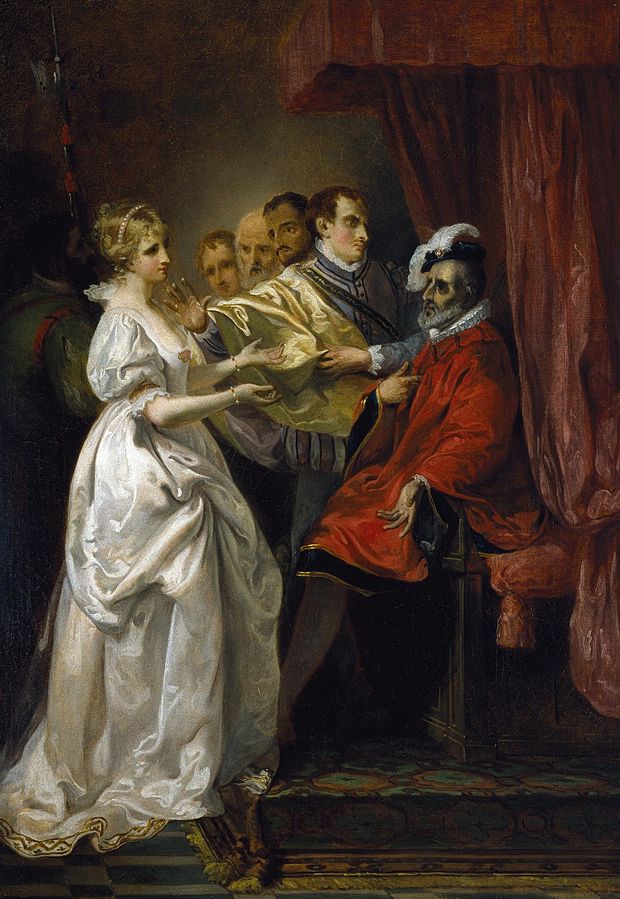 Helena and Count Bertram Before the King of France, Francis Wheatley, 1793

When so distinctive a heroine as Shakespeare’s Helena is absent from the stage of All’s Well That Ends Well for most of the play’s last act, we are bound to gather something essential not only about what she has been through and done, but also about the play itself. All, including the King who has journeyed from the court, are gathered at Roussillion. Though the audience knows otherwise, Helena is presumed dead; she is mourned and much praised, but life goes on. How it goes on is revelatory of the movement of the whole.

The King has tasks to perform apart from grieving the loss of one whose gifts of healing once rescued him from impending death. Now, with the passage of time, he feels his strength waning and a natural end likely. Pairing and matrimony, gathering the eligible, attempting to estimate character and reliability, even pardoning the tarnished (Bertram) now occupy his Majesty’s attention. He seeks clarification about the exchange of treasured rings; he offers to provide dowries where they may be needed. He does not mention romantic love. Predictability and swift provision may not suit its attributes. The endeavor is urgent; tempo accelerates.

Here we may re-register that this is a land of widows and widowers, bachelors and maids. The marriage of Helena and Bertram, made possible by the King’s pledged recompense to Helena, is thought to be dissolved by untimely death. Though no one actually says this, the action does: survival, itself, is in jeopardy. Anxiety is at the back of things. The King’s activity is a form of crisis intervention. The fate of the community has become a central concern. Dramatic and theatrical values have been altered by the sheer fact of jeopardy.

Towards the close, when Helena re-enters, alive and pregnant with Bertram’s child, her fate, though it was not part of her original intent, is inextricably linked to the community. Though Bertram intended to avoid her, she has met his improbable (one might say preposterous) conditions for continuing the marriage: obtaining his ancestral ring and carrying his child. Roussillion will continue. This is the play of survival.

Where there is death, it is distanced from us. The death of Helena’s physician father and of Bertram’s father the Count of Roussillion occur prior to the start. These losses are givens of the play, not events that happen in the course of the action. The war in Italy reaches a speedy accord. Its sole casualty, reported by a secondary character, concerns someone who has never been onstage. Death is distanced or averted.

Concern with survival ranges from the King’s with posterity down to that of Parolles, who seeks on any terms little beyond more survival—even in a dungeon or the stocks. His range is from elaborately deceitful to plain silly, yet he is not cast out of the play’s world. Although there is persistent attentiveness to it, survival is not a value that is celebrated.

The marriage between Helena and Bertram is consummated under clandestine circumstances: Bertram’s assignation with, as he believes, Diana, the then-prevailing object of his ardor. Helena’s identity is hidden from him. A bed-trick has been devised with assistance and detailed effort in order to meet Bertram’s implausible conditions. Thus is the marriage consummated and the child conceived that is Roussillion’s link to survival.

Not all the privilege, cordiality and grace in this affable land have been able to produce an instance of true, reciprocal love. The play of survival is also a play of limits. It is perhaps a tribute to the ideal of romantic love that its absence implies a void—a substantial one.

The King is reunited with his esteemed healer and assured about his kingdom’s continuity. Helena has accomplished the nearly impossible mission of meeting Bertram’s conditions. If Bertram now is won, and so long as no deadly divorce obtrudes between them, Helena will declare all to be well. Bertram, for his part, speaks of Helena to the King in third person and in a conditional mode, “If she, my liege, can make me know this clearly .  .  . ”  After what Helena has felt, been through and done on Bertram’s behalf, this modified conditional is meagre and grudging. It is not substantially helped by the next line, “I’ll love her dearly, ever, ever dearly.” The locution is perilously close to the language he used to Diana whom he had no trouble discarding and even publicly insulting.

After Bertram’s meagre reply the reader/spectator is at the verge of heartbreak on Helena’s behalf.  All her sustained efforts, strenuous and dedicated, have almost overcome his resistance. The imbalance between the two remains striking. Her bounty is boundless, as was Juliet’s. She is like an adult Juliet without her Romeo. One might continue to wish to cross the gulf between these two characters by means of a conceptual framework. Is that possible?

In recent years I’ve held more than one playbill for All’s Well in which we are informed that the production is based on a view of Helena as feminist heroine. There is much here that feminism might find congenial. We witness Helena’s development from a starry-eyed adolescent (Bertram her “bright, particular star”) to an active, courageous young woman who goes to the King’s court and offers her gifts to heal his mortal illness, her own life as guarantor. When he recovers, his pledged recompense is to honor her request that she may choose her mate. For her merits, a grateful King also provides status and financial independence. She may chart her course, proceed with her quest. Hers is a resourcefully earned and bravely sustained autonomy.

Soon, though, feminism is challenged or else deterred. For, in sustaining her choice, Helena is meticulously compliant with Bertram’s conditions. And she is the reverse of assertive. When he goes off to war to escape their marriage, she is not merely without retributive anger, but filled with tender concern lest his avoidance of her turn out to be harmful for him. Though she is proceeding by choice and cannot be called a victim, the love she aspires to is not reciprocal. No one can claim that she “has it all.” Laden with attributes though this heroine may be, a perspective on feminism would have to be modified or abandoned in order to declare Helena its heroine.

It is also difficult to perform this non-idealizing play as a Brechtian cabaret. Helena’s love, generous and true, does not bear downgrading or marginalizing. Enlightenment even from Freud is not readily apparent. The pleasure principle does not prevail in this comedy. The large fact that biology is destiny doesn’t quite illuminate. Freud’s own questions in Beyond the Pleasure Principle are more fruitful.  There, as we know, Freud challenges his own theories, turning them into inquiries. Insofar as pleasure offers surcease of tension and rest does it not resemble death? Doesn’t it tend to be strenuous effort that makes us exponentially wakeful and stirs our ultimate aliveness?

In Helena’s unwavering efforts, what prevails is surely not quiescence of tension but the capacity to sustain her difficult quest. She also exercises authority, becoming something of a strategist: her pilgrimage as to a shrine is transformed into the secret assignation that consummates her marriage.  Although that involves planning and assistance, it is a solitary choice, utterly unknown to Bertram. She is without recognition or acknowledgement, proceeding for its own sake. As such, she might almost become a kinswoman to King Lear’s Kent or Edgar. We may also ask whether there is a greater freedom, especially where love is the basis, than forging and acting for their own sake.

I doubt that any doctrinaire or schematic club would grant membership to Helena, though she is a great creation. I think it remains true that not feminism or the grace of healing or pursuit of an idealized image unify this multi-strand play so much as the stark notions of survival and limits. The most eloquent of dramatic poets can also give the plainest truths their due.

Though this “dark comedy” is not ebullient and surely not frivolous, it is stimulating and lively, full of theatrical provocations to inquiry. There is enough flow of complexity and also a contemporary mood to make it congenial for actor and spectator, without a merely grafted-on relevance.

It is intriguing to think about the staging of Bertram’s last lines: “If she, my liege, can make me see this clearly  .  .  . ”  Does either Helena or Bertram move towards the other? Perhaps not. I see it as a still life.

I think that much of the play may be lighted in a way that suggests the timeless, non-glorified, yet tender attention to the quotidian that we find in the later Rembrandt. At the last, though, I would tend to summon “the violet hour.” Muted.