An Improved Ending for Metamorphosis (a satire) 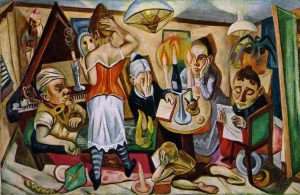 Kafka’s Metamorphosis is a classic of 20th century literature. But some critics have rightly pointed out that it is a depressing work, particularly the ending. This writer agrees and in spirit of lifting the readers’ spirits, the following revision is herein presented to make it less so and more relevant to today’s world.

[we insert the following near the end of the story]

“If it could talk,” his father said, “then we could reason with him, come to an understanding, convince him to go back to work.”

“It has to go,” Grete abruptly said while she walked around the dining room table, putting her hand around her mother in comfort. “We have to accept the fact that that revolting vermin is not Gregor anymore. We’ve lost our roomers, as it is. I’m tired of cleaning up after him. Besides, after we get rid of it, we could put his room to good use. Maybe set up a ping pong table, or something.

Gregor was turning around to go back to his room, but had difficulty doing so. He felt weak. He also felt pain here and there. He made it to his room and went inside. As soon as he managed to go into his room and shut the door, he heard a click behind him as the door was locked and his sister yelling out with triumph, “Finally!”

She went back to her parents, still sitting at the table, and leaned in in a conspiratorial pose. “We have to grab the bull by the horns, or in this case, we need to grab the cockroach by the antennae. Father, mother, we have to go in and kill it and then dispose of that thing. Our lives will then get back to normal.”

“What will the neighbors say?” wailed her mother.

“But how? How do we kill it?” Grete’s father asked.

“Same as we’d do with any other cockroach, father. Step on it,” said Grete.

“He’s too big! He’s bigger than you are!” Mr. Samsa pointed out.

“Good point. Then, we’ll all swat him with rolled up newspapers. That should do it. Father! Roll up the newspaper! But leave page 20 back. There’s a sale I want to check out later.” The three of them immediately got to work and in less than three minutes each had a club of newspapers in their hands, without page 20. They then tiptoed up to the door of Gregor’s room.

“All right,” she whispered to them. “Let’s take him by surprise. We’ll all rush him and take him out. All right?” They nodded in agreement.

But the door was locked. She had forgotten to bring the key, which she had left on the table. Feeling chagrined, she walked over, took the key, came back in a dignified manner and simply opened the door without fanfare.

Meanwhile, Gregor had heard the shout and wondered what it was all about. He saw his family enter the room, holding newspapers in their hands, with unquestionably hostile looks on their faces and slowly approach him. All at once, they started hitting him with the rolled-up papers.

Gregor scurried away from them to a corner of his room, but they followed him, repeating their attack.

On top of his pain and weakness, the oversized cockroach was annoyed, to say the least. Right when his father whacked him once again over on one of his compound eyes, he lifted his head to seize the newspaper away from his hand. In doing so, he accidentally bit his father’s wrist with his mandibles.

“Oww!” cried out Mr. Samsa, and they examined his wrist. “Oh, no! Am I going to get rabies?” he wondered out loud.

“The newspapers are just making him angry,” Grete opined.

While they had examined the paterfamilias’s wrist, Gregor had realized something important. The reason why he had been feeling weak and in pain all this time was because he had been hungry.

Say … His father’s wrist had a nice flavor to it.

Now, Gregor began to look at his family with a different eye. Actually sixty different eyes. He quickly scurried to the door and shut it with one of his hind legs. Too late the trio realized that they had made a big mistake.

Grete went down first, her neck neatly cut in two. This was followed by his mother, who tried to keep him away with her arms but only succeeded in having them sliced off by the mandibles, then her neck. Father was last and he put up a fight, but it was pointless. Then, Gregor got down to business, or rather to lunch.

That evening, Gregor was satisfied from having eaten. If cockroaches could burp, he would have burped. There was plenty of food left, of course, enough for two or three days, but something was happening to him which would put a stop to his imagined future repast.

His body was changing. By midnight, the change had been completed. In anticipation of a 21st century trend in America, Gregor realized he was now a female. Henceforth, she would call herself Gregoria. She was a real trailblazer. An inspiration. A transgender.

Gregoria wondered if there were any transgender bathrooms in the neighborhood that she could use in the future.

That concern was put on the backburner for a while. Now, the transgender vermin approached each of the bodies and, one by one, implanted an egg inside each human body. Gregoria then placed herself in the middle of the bodies, ready to defend them from any intruder.

By the next morning, she realized that she would not accomplish one, last, important mission: she would not be able to agitate for a transgender bathroom in that neighborhood.

The cleaning lady came later in the afternoon to their apartment to tidy up. When she got to Gregor’s room and saw the carnage, she took the broom handle and prodded Gregoria. Nothing. No movement. Same with the human bodies. All were stiffs.

She called the authorities, who took the human bodies away to be buried. As for Gregoria, the cleaning lady kept that to herself as a trophy. She sold it to a traveling circus which paid her a good amount for the grotesque curiosity. She would not have received so much money if she had sold it a month later, because by then, it was no longer a curiosity.

Gregoria’s eggs had hatched and had emerged from the ground. The vermin begun to look around.

Armando Simón is a retired psychologist, an unapologetic transphobic, and the author of Very Peculiar Stories, The Book of Many Books, Wichita Women, and Fables from the Americas.

PrevSo Where Are the Feminists?
A Logic of Transient Reality DawnsNext