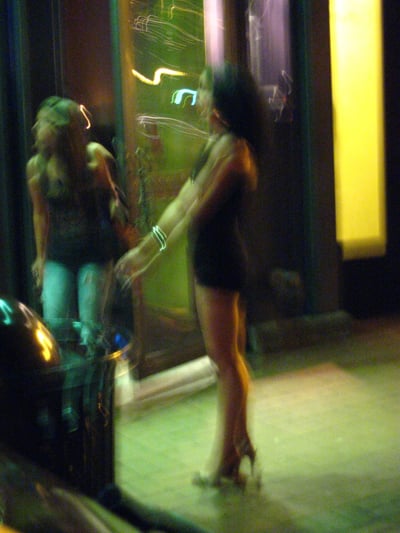 y father, whose nickname was The Breeze, because he was so cool, sometimes took me on his rounds collecting money for a loan shark named Tommy Grant. This is not a good thing for a parent to do, but I didn’t know any better at the time and enjoyed it. Other kids got taken to ball games. I got taken to various neighborhoods in the Bronx and Manhatten to watch my dad work. Sometimes this involved The Breeze putting a guy up against a wall, but it never got worse than that. When this happened, he would always comb his hair and pull his shirt cuffs down so they showed properly below the sleeves of his sport jacket before getting back in the car. He’d wink at me, put the car in gear and drive off. At the end of the night he always stopped at Tommy Grant’s club on Jerome Avenue to drop off the money and get his pay. Sometimes he’d go in for a drink and I’d hang out with the girls from the Spanish bar across the street.

One night The Breeze wasn’t his usual happy-go-lucky self, which I noticed but wasn’t bothered by. He and my mom fought a lot and bad moods were something I had gotten used to. I should have known that this mood was different, but I was only eleven and not that discerning. When we pulled up to the club, The Breeze was sweating, but it was a warm night and people sweat on warm nights. Tommy Grant and two other guys were sitting on folding chairs near the front door. I got out and went over to the girls, Carmen and Iris. There were others, but only two or three hung out in front at any given time. I didn’t know they were hookers, nor what a hooker was. They liked me and gave me chewing gum and talked to me like I mattered to them, which was a very rare thing in my life in those days. Handsome. Little man. You getting so tall. You break my heart some day. These things they said made me feel good in a way I couldn’t explain, but I understand now. They oozed sexiness, unbeknownst to eleven-year-old me, except on some very deep level, a level that I wish I could go back and access, but know I can’t.

I was unwrapping a stick of gum when I heard a noise from across the street. I turned and saw my dad backing away from Tommy Grant. The other two guys were standing behind The Breeze. Tommy nodded and they each took one of my dad’s arms and held him facing Tommy, who was taking off his belt. Nino, nino, I heard Carmen say, come with me. She was tugging at my arm. I resisted long enough to see Tommy Grant raise the belt high above his head, but Carmen was strong and dragged me toward the ally next to the bar. Iris stood at the ally entrance while Carmen pulled me to the back and found two milk boxes for us to sit on. I started crying. I had heard the belt cracking like a whip against my father’s face before we got to the back of the ally. Nino, Carmen said, and then she put her arms around me and pulled me to her chest, where I cried a torrent of tears onto her beautiful black dress. Nino, nino, she kept saying until I was able to stop.