Be Very Afraid, or Not

Book Review: The Terror of Existence: From Ecclesiastes to Theatre of the Absurd, by Theodore Dalrymple and Kenneth Francis, 157pp, New English Review Press, 2018 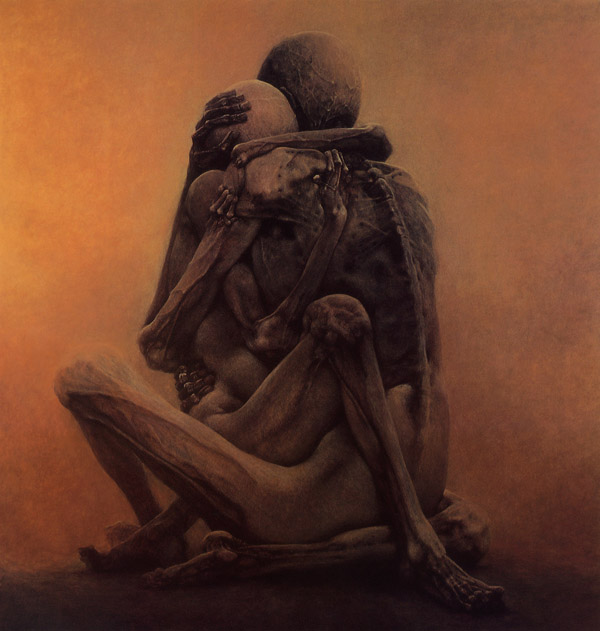 Here are twenty-three short essays (plus two introductions) on works of Western literature in existential keys, ranging from Ecclesiastes (one essay from each author) through Hamlet, Gulliver’s Travels, ‘Dover Beach,’ Waiting for Godot (three essays, including a brief exchange between the two authors: would there have been more of these), Arnaud’s The Wages of Fear, and fourteen others. The organization is chronological by work, but with the authors’ alternating essays one becomes party to a sort of conversation. This matters. What could have been a mere tennis match—Dalrymple’s unbelief and Francis’s strong belief make for a productive tension—becomes an engaging dialectic.

There is no discussion of ‘existentialism’. Is it, as a stance or a mode of perception, necessarily deformative, as Francis seems to suggest? And always atheistic (which is simply mistaken)? Francis spends much time rightly attacking the absurdity, the sheer irrationality, of a purely materialistic cosmos: so much time, in fact, that the idea comes to seem reductionist. Yet through Francis we do understand, if not terror then certainly unease. For example, we feel it in his treatment of Poe’s “The Tell-Tale Heart,” in which an obsession to murder cannot trump conscience. This contrasts with Meursault’s murder of the Arab in Camus’s The Stranger, since Meursault was exactly not obsessive and has no conscience. (Tellingly, Dalrymple finds that tale “insincere” from the very first line: “Mother died today. Or maybe yesterday: I can’t be sure.”) 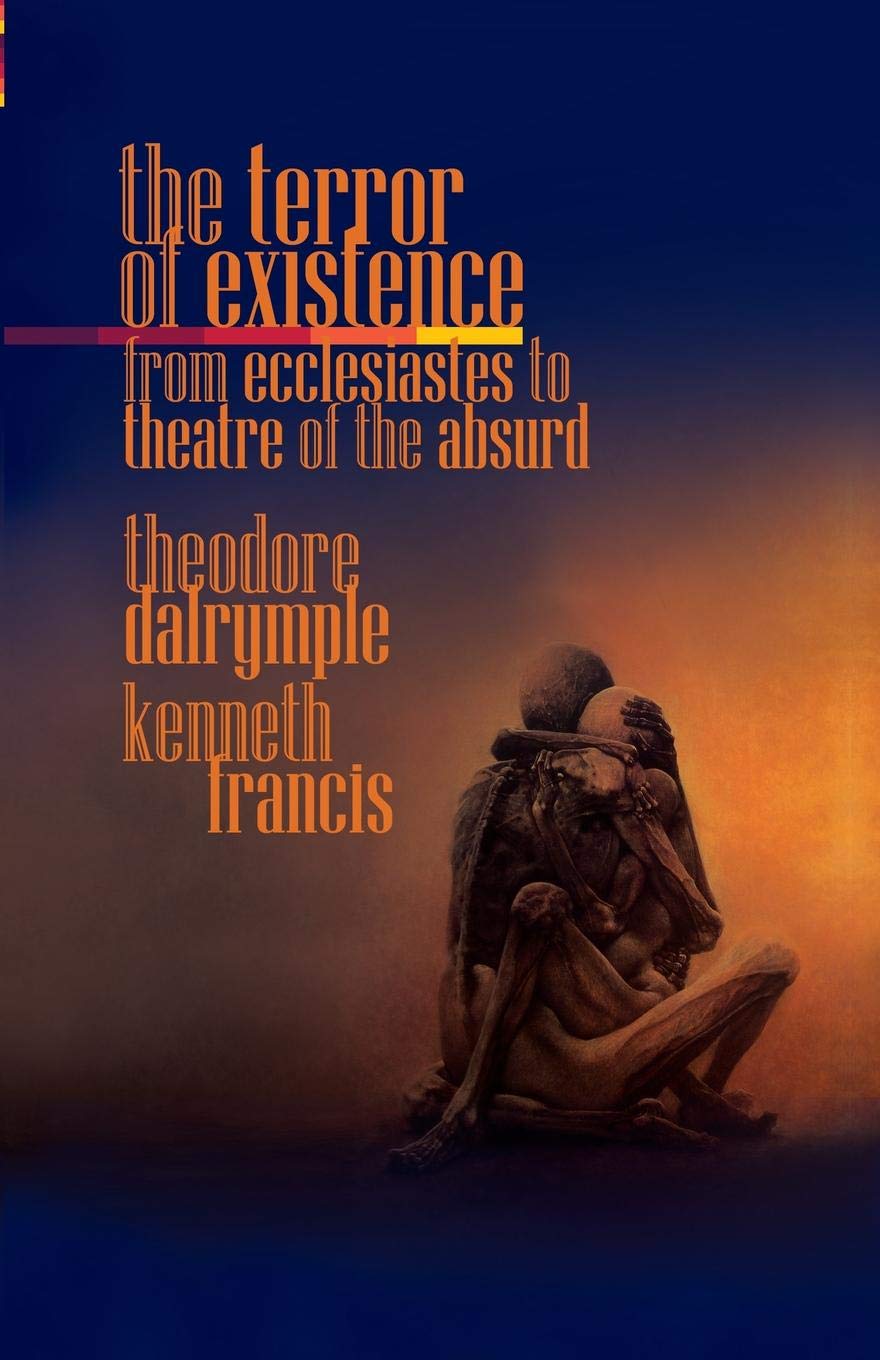 The atheist Dalrymple has a good deal more fun than his colleague; in fact, his objective is always to have fun when it is to be had. For example, Gulliver’s Travels, in all its bitter denunciation of everything under the sun—unlike the author of Ecclesiastes, Swift is not resigned—is enjoyable; such scorn at least evidences a norm, even if it is left unsatisfied. And who but Dalrymple could adduce “an Ugandan tribe called the Ik”who, after eviction from their tribal lands, became “a collection of psychopaths,” or instruct us to ponder theodicy when we’ve completed Gulliver. Be consoled, he instructs. Moreover, since “the exposure of evil is a transcendent goal that gives meaning to life,” just so do we read Gulliver “with a song in our hearts.” And Francis, re-configuring “The Tell-Tale Heart” into a happy fable entitled ‘A Heart of Gold’, reminds us that it “doesn’t have the same appeal, does it?” Unlike Sartre’s Nausea. Francis reminds us that the hero in that, Roquetin, disappears “into the abyss of the grotesque,” for “the burden of responsibility of existential freedom is overwhelming.” Such is the terror of a Godless worldview.

The difference between the two men suggests intersecting axes. Dalrymple reads horizontally, so to speak. Literature is terrain, so let us enjoy exploring it on its terms. Francis is a vertical reader. If the work does not lead to, depend upon, or at least assume something—actually Someone—up there, then it is desolate: not worthless, exactly, but—to use a distinction from C. S. Lewis, himself a crypto-existentialist—to be ‘contemplated’, not enjoyed from the inside. (Maybe that is why I find Dalrymple the more congenial of the two, even though I share Francis’s religious conviction.)

Read More in New English Review:
Reading and Reduction: Michael Ward’s Planet Narnia
In Risu Veritas: Ten of the Funniest Movies Ever  + Three More
Ours are not the Children of the Nobles

Some threads of the discussions of Ecclesiastes are taken up in the exchanges on Waiting for Godot. Boredom and authenticity have already been touched upon (Dalrymple adducing a study of gorillas!); now it is Time, Change, and God that come into play. And right here I must confess. A theater colleague of mine was fond of directing this play, so I’ve seen it three times (as chairman of the department I had no existential freedom). I didn’t get it; or, rather, what I got I disliked. My settled opinion was that the play was pretentious, even adolescent. Now, though, after reading the two authors, I think otherwise and am ready for another go. Here really is a terror, a depiction of nothingness. Sure, one might ask, If that is so, why write about it? Because, say our authors, art is not life, and though Beckett talked the talk, he certainly did not walk the walk. A person of high integrity and both moral and physical courage, he was also generous, and there is nothing absurd about that.

So just what is the ‘surd’—“lacking sense,” “irrational”—from which we ‘ab’? Must the depiction of purposelessness be an endorsement of it as a Weltanschauung? In his Chance or Dance, Thomas Howard makes the point that Francis pounds home, diving deeply into the irrationality of materialism (or ‘naturalism’). In “The Love Song of J. Alfred Prufrock” T. S. Eliot sees the night sky as “a patient etherised upon a table,” a line C. S. Lewis loathed; yet Lewis, in The Abolition of Man, virtually agrees. Such is the state of a post-Christian world, and it is best that we Christians see it.

Read More in New English Review:
Kristallnacht and FDR’s Failure to Act
Ours are not the Children of Nobles
Madmen in Authority

Halfway through the book I wondered: Who chose these particular works? Do the authors regard them as typical of existential thought and literature? There is no mention—none—of the devoutly Christian godfather of the philosophy, Soren Kierkegaard; nor of the devoutly Catholic, prize-winning novelist and existentialist philosopher Walker Percy. So I revisited Charles Hill’s Grand Strategies, a commentary on the applicability of great works—including Nietzsche, Dostoevsky, O’Neil, and Kafka—to the practice of international relations: seventy-eight works in nine categories. A representative selection, all but two from the Western tradition, vindicates a liberal literary tradition that includes the existential stance.

Inevitably during this conversation, a reader will compare and contrast the authors. Dalrymple seems to know a study (as opposed to advocacy) when he sees one, as with Ionesco’s Le Roi Se Meurt, to him a “depiction and exploration” of a man who cannot control death. Comparing Berenger, the king, to the Azande tribe of the Sudan who sees illness and death as the result of malevolent magic, Dalrymple reminds us that death is not (as we’ve come to see it) an “injustice, or an infringement of rights.” Rather the real problem is the loss of the ars moriendi. (Does that loss begin with Nietzsche?)

When Francis discusses The Catcher in the Rye, I simply wonder if he and I have read the same book, and I ask: Did I imagine that Holden had a sister whom he loved dearly? And is there no context other than Father Knows Best? No Angels with Dirty Faces? or Rebel Without a Cause? No death-dealing, blood-drenched WWII combat that Salinger had slogged through? Coming very close to blaming the assassination of John Lennon on the book that assassin Mark Chapman was reading is a cheap shot, and calling it “a kind of Leftist propaganda manifesto” is downright bizarre, the tip-off being a sentence that begins, “And is it not coincidental . . . ” I am skeptical of his occasional professions of enjoyment of existentialist works; too often he fails to follow Lewis’s advice, that to find a book bad one must read it first as though it might be good.

Still, I would have put the most powerful essay last, notwithstanding chronology, Francis’s “Nietzsche’s ‘Parable of the Madman’: what happens when you unchain the earth from the sun.” His quotations from Nietzsche are apt, both representative and telling: the abject terror from the page is contagious. (Even in translation, Nietzsche is a very great writer.) More so is Francis’s summary of Western civilization as it now stands: ‘depraved’, ‘satanic,’ ‘deviant’. He quotes Anthony Esolen: “What is the worst thing about living near an open sewer?” he asks, answering, “you no longer notice it.” Finally, Francis has us feeling sorry for Nietzsche, whose lunatic plea—“oh come back, My unknown god”—is close to the sanest thought he ever muttered. He closes by citing Dalrymple, who reminds us of our abundance of freedom, of choices, and of entertainment—unexcelled in all history—and yet, “on the other hand, never have so many people felt anxious and depressed, and resorted to pills to ease their distress.”

When, after fifty years of college professing, department chairing, committee attending, and program building, I decided to retire, I wondered what I would miss. The answer is nothing—I had emptied the tank—except for a very small number of certain colleagues. Perhaps the reason is this: I always knew that soon enough I would not be missed by the preponderance of people at the college, and that what I had put in place would, within a year or two, be compromised, if not gone. Ecclesiastes has been proven right, all is vanity—almost. As it happens not all, for students told me and continue to tell me how great a difference I made in their minds and lives. ‘Legacy’—like those other groaningly over-used words ‘victim’, ‘survivor’, ‘community’, and ‘hero’—should be banned from use; it is an abstraction. People are actual, concrete.

In short, what Walker Percy (like Dalrymple a medical man, though he never practiced) tells us holds true:

What man is cannot be grasped by the science of man.
The case is rather that man’s science is one of the things
that man does, a mode of existence. . . . Man is not merely
a higher organism responding to and controlling his environ-
ment. He is . . . that being in the world whose calling it is to
find a name for Being, to give testimony to it, and to provide
for it a clearing.

Francis knows the most important truth, so what is there to fear? (Well, you say, there is Hell: but that’s rational.) Withal Dalrymple does not seem at all terrified—and given what he’s seen clinically why should he be?

Whether familiar with the works or not, the reader finds provocation and his intellectual modus operandus gets a workout, which is why I want a second book, and a third, from the same two penetrating writers of such contrasting sensibilities—but with a different flavor of existentialism: perhaps Lewis’s Till We have Faces, or Percy’s Love in the RuinsThe Bridge of San Luis Rey, or, Percy again, The Thanatos Syndrome, or, for a real adventure, Green’s Brighton Rock, where Pinkie, the sadistic young Catholic killer, certainly knows that “much can happen between the stirrup and the ground.”

After having (and providing) some fun by ripping Freud, the doctor concludes his essay on Hamlet with, “what seems to me certain is that [he], and by extension all of humanity, has a mystery . . . I am not any nearer myself to plucking it out. Furthermore, I would not care to pluck it if I could.”