Busing Circa 1969 as Seen Today 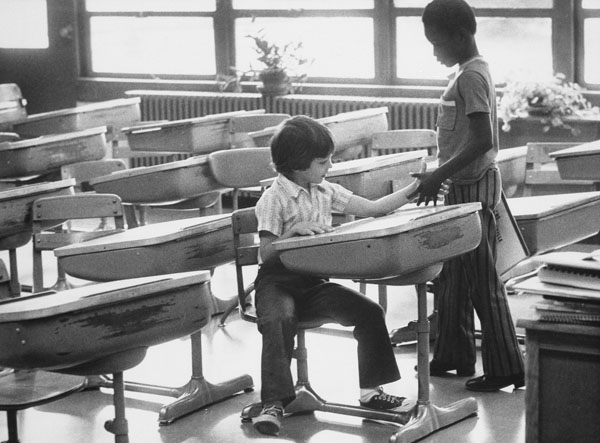 If men were angels, no government would be necessary

Montpelier sat before the Blue Ridge Mountains an adumbration

of heaven. Just over those mountains is West Virginia.

Over there were few slaves, but Madison’s house was

of wheat and tares, and barleycorn, while he labored on the problem

of freedom. Before a gorgeous window he squibbed the Bill of

Rights, but few of his slaves could read. One wrote a book, and

another earned a patent. When I visited, the house belonged to the

Federal Government. It was a Landmark. Unable to explain the

capacious grace or the spare yet ornate luxury, busy but calm, it was

the day before Thanksgiving, 2012. The trees were not yet all yellow.

Madison believed in checks and balances, but wanted the Judiciary

to check the Legislature, and thought the judges should not be the

barbarous poor with mud on their boots from Alabama. It was

the Warren Court who, when I was a boy in Virginia, decided to

inequality, by ridding us of separation. They would put us in one poke.
With a stroke of the pen, the race question was settled for us to dodge
with spitballs and fast reflexes. Then there was white flight, out of the

urban, as whites went to West Virginia, and other rural areas.

My family fled to northeastern Pennsylvania, where blacks were few.

I listened to Jefferson Airplane with a black friend. Blacks had been
treated like Jews on the plantations. Madison had done better than
some, and nearby at Ashlawn, Monroe had qualms. Slaves had no

families, but some were able to solve equations, or talk turkey.

The tractors’ wheels like Roosevelt dimes in northeastern Pennsylvania

rolled over the rills before the Johnstown Flood erased the farmers.

The costs have increased a hundred-fold since Jefferson’s nickel.

Where slaves once ministered to James Madison’s fields,

the National Trust tills the race course beside Montpelier today.

legislation that streamlined the administration

and “elevated the level of decision-making”*

to that of a golden quill behind armored fenestration,

such that we could have Brown vs. Board of Education.

At eleven I was bussed in Virginia near the District of C.

flying paperclips in the classroom, firecrackers at lunch,

I snoozed on the one-hour morning commute, as Levi-Strauss

droned on in my anthropology book, on the Race Question.

Gangs of kids moved according to ancient variables, while

Many today think busing was worth the aggravation.

*Professor Gordon Wood at Brown University during a conference on Liberty held on Saturday, October 29, 2011 paraphrasing the philosophy of James Madison and the Federalists on the importance of leaving the judiciary in the hands of the highly educated.