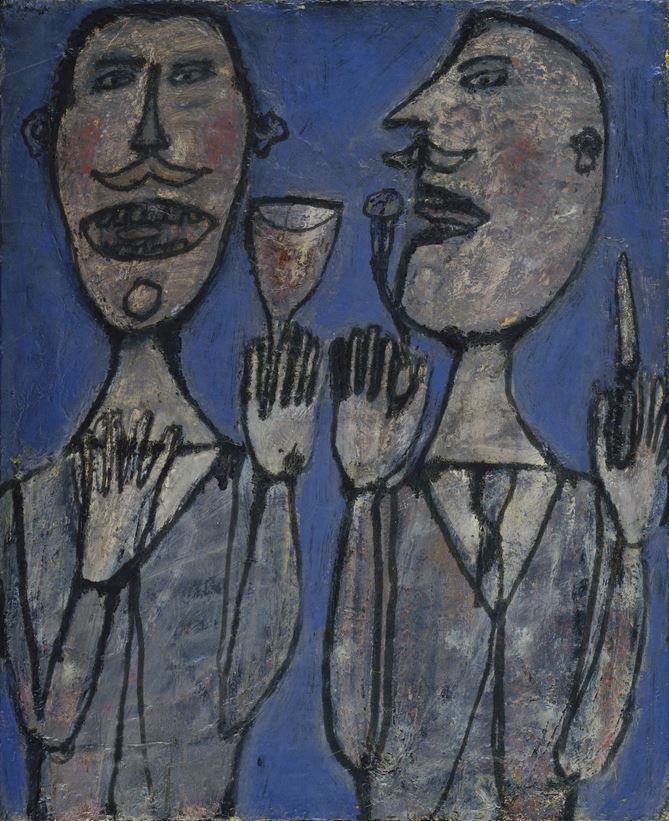 … he that can see submissive misery without relenting,
and meet without emotion the eye that implores mercy, or demands justice,
will scarcely be amended by remonstrance or admonition;
he has found means of stopping the avenues of tenderness,
and arming his heart against the force of reason.
—Samuel Johnson

The Real Clash of Civilizations

The (losing) war against human nature is taking place on many fronts in the trodden down fields of human endeavour. Some of the battles are of course more consequential than others. If we are indeed a species in peril, as many climatologists and nuclear war professionals forewarn, and if individuals, en masse, through subtle coercion (advertising, peer pressure) are being inveigled into making decisions that compromise not only individual health and happiness, but the health of the environment, we can propose as a subject for debate that there are two major opposing players that will determine the destiny of the species and the planet earth: the ‘cares’ and the ‘care-nots.’

In a letter to Hannah Arendt, the philosopher Martin Heidegger writes, “we change ourselves into that which we love.” Allowing for individual experience to occasion the universal, how does this very personal and deeply felt observation implicate the cares and care-nots?

The care-nots, above every other consideration, care for themselves. The world’s most influential care-nots, by channeling their discipline, dynamism and aptitude into amassing all that the accumulation of wealth converts into easy purchase (a fleet of Rolls-Royces, golf courses, yachts, islands), declare before the twin altars of self-aggrandizement and instant gratification that they love themselves, their possessions, power and influence more than all the world’s human and natural resources that provide for them.

The cares in turn love all the things we want for those we love. They care about the air we breathe, the quality of foods we consume, the respect and minimum consideration owed to strangers, the elderly and infirm who cannot help themselves, and prior to the things of the world in their aggregate, cultivating and propagating those ideas and ideals that vouchsafe for the dignity and betterment of mankind: freedom of speech and assembly, universal health care, equal opportunity under the law, equitable pay.

The word care comes from Middle and Old English Caru; akin to Old High German kara, to lament, to sorrow, grieve, be troubled, be anxious, to offer mental attention, to heed. In Swedish, kära means to fall in love.

To care presupposes anxiety, concern. In our present century, among the growing number of disquieting developments over which the cares are concerned is the rising sugar content in food; its adverse effects on dental hygiene, type II diabetes and obesity. The cares want food manufacturers to reduce or eliminate altogether sugar from most foods.

In the documentary Big Sugar, Brian McKenna lays bare how the sugar barons periodically contribute to Kellogg’s coffers and are handsomely rewarded for their largesse: the sugar content in Kellogg’s Corn Flakes has doubled since the 1950s. According to The Telegraph, the added sugar in children’s cereals has gone up by 33% in the past three years.

In making their choices, the care-not sugar barons advertise to the world that they don’t care about the deleterious health effects of their products on consumer health, and neither do the companies that agree to spike the sugar content of their imbibables and edibles. For both cane growers and retailers, it’s a win-win proposition that trumps all other considerations.

Among other big winners are our much-in-demand dentists whose livelihood is directly related to the cultivation of sugar dependency. Sweet-toothed Canadians consume an astounding 88 pounds of sugar per year. In the acid light of what some psychologists have characterized as suicidal consumption syndrome, it constitutes a dereliction of professional duty if your dentist hasn’t advised you to use a water pic. Every dentist knows the water pic is the first line of defense against tooth decay and especially gum disease (periodontitis). Every dentists knows that chronic periodontitis reduces life expectancy between two and and five years. Your dentist’s silence is nothing less than a crime of omission, an open confession that he doesn’t give a damn about your teeth or your life. His sweet life is guaranteed by your addiction to sucrose: refined white sugar. It wasn’t so long ago that a person would have to chew three feet of cane for the equivalent of one teaspoon of sugar. Skipping dessert was not an option.

The tobacco leaf, in its natural state, isn’t nearly as harmful as its sundry adulterated derivatives: pipe and chewing tobacco, cigarettes, cigars, snuff. According to WHO (World Health Organization) there are 50 known cancer-causing chemicals in tobacco. Smoking will result in the death of 80 million people in the 21st century. The business model that grows, refines and disseminates the leaf speaks in a single voice. From the top down, the CEOs don’t give a damn about the state of the nation’s lungs as they continue to lobby for the right to develop and insert addictive chemicals into their products. They only care about the number of zeros in their bank statements, most of which, pace the Panama Papers, end up in off-shore tax havens.

Despite their lack of funds and agency, the cares, many of whom are volunteers, whose collective voice is but a whisper next to the powerful care-nots, have made it their mission to stand up to the tobacco producers in order to save the world’s most vulnerable (our children) —one million of whom will perish from second-hand smoke.

As for which side is likely to emerge victorious in this and other cares versus care-nots value conflicts, a quick survey of the state of the planet earth confirms what we already know anecdotally. The world marches to the drumbeat of the care-nots for whom all self-serving ends justify the means. If a particular law or regulation is at odds with a financial objective, the care-nots will do whatever is necessary to have it annulled or modified in their best vested interest. We all know that the paperboy and parking lot attendant didn’t lobby for the establishment and legalization of off-shore tax havens.

The most eminent of the care-nots are the world’s elite billionaires who avoid paying their fair share of tax by paying off lobbyists and politicians to write tax laws in their favour. Much of their success is owed to their extensive legal teams, the cozy cabal of care-not lawyers whom only the rich can afford. Canada’s most articulate voice in journalism, Conrad Black, who is all too familiar with the $500/hour fee lawyers routinely charge for the privilege of receiving their advice and consent, acerbically notes:

. . . the legal profession is a 360-degree cartel that bilks society, self-proliferates through its incumbency among legislators and regulators, and has got away with class robbery greater than that of the first two estates in pre-revolutionary France behind a smokescreen of pious claptrap about the rule of law.

The above impartial portrait notwithstanding, the lawyers, including those in Black’s employ, are the great enablers, just as the billions in tax dollars that have been diverted from government coffers into the deep pockets of care-not billionaires are monies not available for health care, dental care, child-care, vital infrastructure and many other government services.

The world’s wealthiest that number in the hundreds own 99% percent of the world’s wealth. A 2021 Oxfam report found that collectively the 10 richest men in the world owned more than the combined wealth of the bottom 3.1 billion people, almost half of the entire world population. And while they speak in different tongues and disagree in matters of culture and belief, what unites them, what defines their brotherhood, is they don’t care—an attitude or manner of being in the world that derives from their brilliance and acumen which includes the uncanny ability to obfuscate their unholy hoarding by engaging professional publicists (glibsters) to wax loud and sympathetic over the plight of the poor and disadvantaged.

But the cares aren’t going away. They remain the stubborn weeds the care-nots can’t root out. And while the former correctly regard the cares as aberrations of human nature, the latter’s numbers and ubiquity (through social networking) are such that they constitute a credible threat to the care-nots’ hegemony, while recognizing that caring, on the scale required in today’s world of withering values, is an ask that must fall well short of what is realistically attainable. Seen from afar as it concerns the destiny of the species, the cares are drowning in a sea of care-nots, and their rescue is becoming more and more problematic as the world’s wealth becomes more and more concentrated in the hands of a few all-powerful care-nots.

If world order, as many proclaim, is indeed increasingly spiraling out of control, should the cares, despite exemplary dedication and exertion, be held responsible, or better yet hold themselves responsible for a strategy that manifestly isn’t working, for not having figured out how to best the care-nots?

Since we are not constitutionally wired to care for others outside of family and friends, is it time (if there’s time enough) to consider tweaking our constitution?

In the near future bio-geneticists will be able to intervene and reconfigure the human genotype. Should the cares seriously consider channeling their focus and energy into biogenetics in order to right what is all wrong in the species? Is this man’s best, last hope? Or are the moral and ethical dilemmas posed by such an intervention a burden that no human being should have to carry? How confident are we that a world without care-nots would be a better world? And yet if caring on a large scale wasn’t an artificial construct but a constitutional given, the well-being of the world would not be an issue.

Not to be discounted is the remote possibility that the care-nots will take what matters to them in their own hands and decide not preside over the toxification of the planet if their own demise is implicated. Death is a deterrent no one can afford to ignore.

Short of rewiring the species, the great challenge of our times is to convince the care-nots to care for all that which they presently don’t care for. But they are ensconced in unassailable fortresses of wealth, and their care-not mandate into which the very meaning of their lives is woven is a tried and tested carapace that conscience, thus far, has not been able to penetrate.

Perhaps it is time for Nietzsche’s new man to appear on the world stage. Are we ready to make ourselves complicit in his coming?

Philosophy proposes that the asking of the question is already a new beginning, a point of departure that implicates a new way of thinking. The author of What Is Called Thinking, Martin Heidegger, writes: “To think is to confine yourself to a single thought that one day stands still like a star in the world’s sky.”