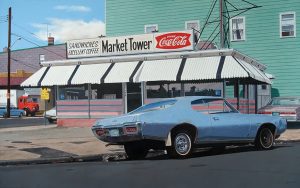 Christianity and the art of automobile maintenance often reminds me of how some cars, often due to our negligence or reckless driving behavior, remind us of how broken we are in both body and soul. Although cars don’t possess souls, they do possess certain bodily drawbacks that need regular attention in order to perform well and retain mechanical reliability; a kind of ‘spiritual’ cleansing, if you will.

Sometimes the design or shape of cars can reflect the spirit of the age. In the early-1950s in conservative America, cars had smooth, rounded curves on their exteriors, whereas vehicles of the leftist wild Swinging Sixties were edgier with sharp, jagged features, even ‘fins’, on the bodywork.

And the difference between European peoples, which Leo Tolstoy referred to in War and Peace, could also be reflected on how certain nations of yore could anthropologically be like their cars’ ‘personalities’, if I may add a touch of hyperbole:

Cars are also a good analogy for the dualistic Mind/Brain Problem by debunking epiphenomenalism (mind is brain): Think of a car being a brain and the driver of it being its mind. A mind trapped in a damaged brain, just like a driver in a damaged car, can’t get the physical brain/car to perform certain functions. The driver’s non-physical mental states aimed at steering the wheel of a car might be rejected by the technology of a physically defective controlling system in the vehicle.

Similarly, a damaged physical brain might not ‘obey’ the commands of properly realizing the mind’s commands of a person’s physical movements. We see this with some patients suffering from Parkinson’s disease having problems with the automatic dysfunction of the nervous system (motor functions), e.g. hand or leg movements rejecting some mental commands.

As for damaged or reliable cars: Our dependency on motor vehicles for getting us from ‘A’ to ‘Z’ is an enormous part of our daily lives, despite the Green State’s disdain for them, which I’ll come to later. On many a long journey on the road with loved ones and friends over the years, I have talked about philosophy, culture, religion, humour and idol gossip. During such trips, I can recall some conversations, but while talking, I rarely remember changing gears (stick shift) or clutching. The German philosopher Martin Heidegger (1889-1976) touches on this in his 1927 book, Being and Time.

He says, in using tools, equipment or materials, the equipment “withdraws” so that the work we are undertaking can receive our full attention. An example is the way competent drivers of stick-shift cars are mostly not paying attention to pressing down the clutch, disengaging the drive, and changing gears and then releasing the clutch to reengage the drive. Instead, our attention is on maneuvering around other traffic and getting to our destination in time.

I remember nearly four decades ago driving in cruise-control mode across the deserts of America in a big 1980s automatic Oldsmobile, a ‘Car from Limbo’, and having no recollection of passing by some parts of the long dusty plains along Route 66. I called this vehicle a ‘Car from Limbo’ because, along the lonely desert highway, it wasn’t sure whether or not to regularly let me down or intermittently harass me, as it randomly stalled and ‘jerked’ as a result of driving over areas of high altitudes. It was always in a state of uncertainty along the way. I suppose this is to be expected of most cars as their engines are glorified air pumps that perform less efficiently when the air is thinner.

As for the type of vehicles with an air of superiority that appeal to me: I have a weakness for classic cars with big engines and leather seats. My favorite vehicles are those made between the late-1940s to the late-1980s. I call such makes ‘Cars from Heaven’, and a couple of good examples are the 1968 Ford Mustang and the British 3.5Litre, 1969 P5B Rover, the ‘poor man’s Rolls-Royce’.

The Mustang is regarded as ‘cool and sexy’, while the Rover is more stiff upper lip and stately, the latter better suited to me, as I begin to morph into the very model of a retired major general. (Ahh…what joy to cruise along smoothly in such a refined machine along England’s green meadows and valleys, and through picture-postcard Cotswold villages, to the sound of Blake’s “Jerusalem” emanating from the radio on the polished dashboard — I know, I’m beginning to sound like fuddy-duddy country squire dressed in tweed!). And if you think I’m over-romanticizing cars, consider the lyrics to Billy Jo Spears’ song, “’57 Chevrolet”:

Now that’s what I call a car from Heaven! But there are some cars that haven’t made it passed the Pearly Gates. And I’m not referring to ghostly mean-machine ’50s Plymouth Fury’s called ‘Christine’, featured in horror stories by Stephen King. I merely refer to problematic cars that never seem to let us down when it comes to letting us down. 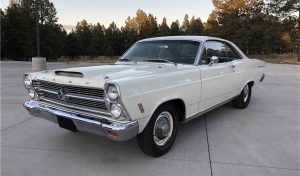 The first car I ever bought (see photo above) back in the early-1980s was a 1966 Ford Fairlane 500. This fast vehicle was a joy to drive, with comfortable leather upholstery and perfect visibility. I purchased it beside a junkyard way down yonder in Georgia, USA, but I had to abandon it a year later, as I couldn’t sell it when I was leaving the State for good by air-travel.

Nowadays, I’m currently driving a 20-year-old Swedish ‘Car from Purgatory’, the Saab 9-3, with the clock milage way, way north of 100,000. It’s fast, powerful, comfortable, but the electrics are unreliable, with defective headlights regularly burning out too soon, and faults with the doors and windows jamming occasionally, as well as brake pads prone to premature wear and tear.

There is also the problem of occasional oil leaks. That’s why I metaphorically refer to it as a ‘Car from Purgatory’: It’s currently in its intermediate state of repairs and is going through the final stages of purification at my local auto-high-priest. A bit like myself in striving to be a better person but failing miserably as a humble lay-theologian.

As for ‘Cars from Hell’, the Citroën 2CV-6 crawls to mind. Many years ago, while attending university in England, I each week-day drove a 2CV on a 70-mile round trip to college and back home again. Stepping inside this ascetic cylinder every morning was like walking into a fridge-freezer. The rickety seats where like old, foldable lawn chairs on the cusp of being dumped into the recycling skip. In winter months, being a creature-comfort wimp, I had to wear big woolen gloves while turning the freezing single-spoke steering wheel.

For anyone unfamiliar with these convertible French cars, they look like a confused Morris Minor identifying as a Volkswagen Beetle hybrid but lacking in oomph (brings a whole new meaning to the word transport!). However, they’re cheap to run, esthetically pleasing on the eye, especially for luddites, and, like puppy dogs, it’s hard to look at one without smiling. This might not be a good thing for a young male student trying to look cool.

No one smiled at Steve McQueen’s Mustang, roaring down the streets of San Francisco in the movie Bullitt. They looked on in awe. However, Mustang’s aside, compared to the latest silent, soulless electrical contraptions we see today, which feel like driving a fast milk float, the 2CV actually sounds like it has an engine.

But where it is damned is its lack of speed, power, engine size and comfort. Like driving a hair-dryer on wheels, it was the car that French farmers of yore exchanged their horse-and-carts for in order to carry a box of vegetables and eggs across a ploughed field. I was lucky that my college journeys in southern England were mostly through flatlands and not hilly regions, which I’ll come to later.

When I purchased the little second-hand French snail, its production had already ended (1948-1990). At the time, it seemed the ideal economy car for a financially struggling student. I wasn’t too keen on the colour (hearing-aid beige) but I remember the dealer pointing out a few oddities about its 1980s’ interior. Firstly, the model I drove was quite drafty with very little heating (I had to rely on the tiny waft of warm air emanating from the engine through the dashboard ‘cracks’).

Also, on the floor of the car there where two water-draining plugholes on either side of the driver and front-passengers’ seats. They were there to let out any rain-water that might enter the interior of the car during heavy showers (the flap-up windows were far from waterproof and prone to leakage). So much for the joys of indoor plumbing.

As for power, this car wouldn’t pull you out of bed. It is also a vehicle you wouldn’t want to overtake an old lady cyclist on a country road, never mind a turbo-charged Saab on a motorway. It’s a car for staying in the slow lane, as it struggles to gain speed after reaching 30mph. Furthermore, the 2CV has a terrible turning circle: A three-point turn takes a lot more than three points.

On one occasion, I went to visit some friends, who lived beside a hilly region in the northern part of the country. As we set off in a packed car on a Sunday drive into the countryside, we encountered a very steep hill. The car refused to climb it halfway up, and we ended up turning back. But the joke for such bad performances in automobiles was usually projected at another vehicle: The 1970s’ Soviet-era Lada, an unattractive boxy little car much-loved by the Russians. The joke goes: What do you call a Lada on top of a hill? A miracle. And what do you call a 2CV and a Lada on top of a hill? Science fiction.