As Good As It Gets

All literature is the search for a better metaphor. If this is true, cinema might be described as a quest for a better image, literally and figuratively. Film and the associated crafts play a large role in the way Americans see themselves and the way others see America. For good or ill, movies are celluloid and digital records of shifting American values and culture.

Few arts are uniquely American with the exceptions of Jazz, Rock and Roll, quilting, decoy carving, barbeque, and cheeseburgers. Among these, motion pictures are preeminent. Thomas Edison had a lot of good ideas, but story telling with film is surely the most influential. From the beginning, Americans made the best good movies and the best bad movies.

The first European who laid down such a marker was John Smith, charter member of the first English speaking business in America (the Virginia Company). Smith would have been unique in any culture. He was a soldier of fortune, slave, navigator, explorer, map maker, linguist, and journalist.

A century after John Smith, the political heart of America was thriving in Virginia. Washington, Madison, Mason, Jefferson, and Henry resurrected Periclean democracy from the ashes of antiquity. With some thoughts from John Locke and Adam Smith, they created a new paradigm with a hard Yankee varnish. 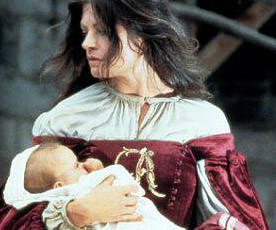 In the process of trying to reform Catholicism, reform zealots had rejected beliefs in redemption, free will, and good works. Hawthorne, a writer with Puritan roots, and his fictional Scarlet Letter, helped to restore these core values to American variants of Christianity. A forgettable film version of the Hawthorne classic ran briefly in 1995.


A short list of great American films (not listed in any particular order of merit) follows below where character, or lack of it, plays a leading role. Hollywood may improve on these but for the moment these areas good as it gets.

Eastwood, the director, like Kazan and Coppola, are great because their art always rises above their material. Their slices of life make the ordinary interesting.

This is a small film about a coach, Herb Brooks (Kurt Russell), who takes a group of college hockey players to the Olympics. The sport is significant because hockey is as close as you can get to combat without actually firing a gun. On one level, it is a study of how talented individuals learn the value of teamwork. On another level, it is a character study of coaching or leadership. The only flaw here is the stereotyped Soviets, mere foils for the Americans. The Russian hockey team of this period was probably the best in history.

Doctor Strangelove or: How I Learned to Stop Worrying and Love the Bomb (1963)

Peter Sellers plays three roles, including a US president and a mad scientist (pardon any redundancy) in the company of George C. Scott, among others. Sellers should have been awarded instant citizenship or at least an American passport for his performances.