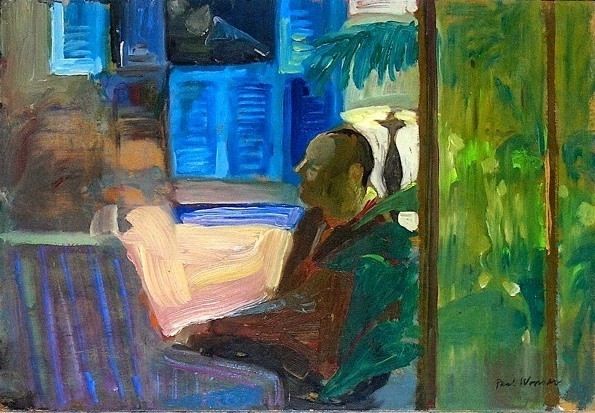 The air is heavy with the coming storm.

He drinks a café crème in a patisserie

and wanders through the village

with its pageant of shops, restaurants and hotels.

The air is heavy with the coming storm.

At the edge of the pasture

is a steep hill thick with oak and maple

rubbing out the sun.

and a rustle of spent leaves

are bleeding copper and gold.

he glimpses the cottage,

of a deeply dreaming sleeper.

And on the dining room table

littered with books and papers

or a dream writing to itself,

________________________________________
David Solway is a Canadian poet and essayist. His most recent volume of poetry, The Herb Garden, appeared in spring 2018 with Guernica Editions. A partly autobiographical prose manifesto, Reflections on Music, Poetry & Politics, was released by Shomron Press in spring 2016. A CD of his original songs, Blood Guitar and Other Tales, appeared in 2016. Solway’s current projects include work on a second CD, The Book of Love, with his pianist wife Janice Fiamengo and writing for the major American political sites such as PJ Media, American Thinker and WorldNetDaily.