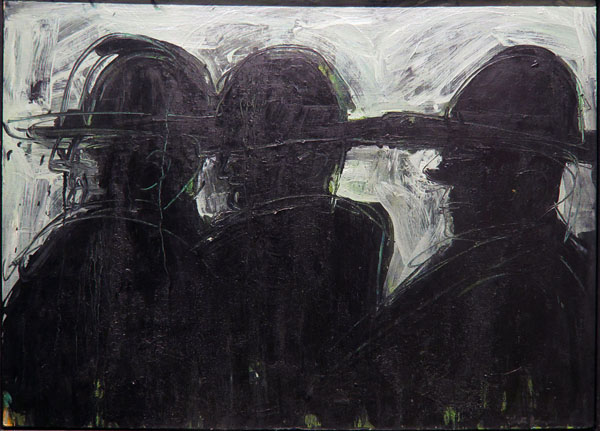 We three had been long silent, either hypnotized to sleep or in admiration of the boring, beautiful mountains limning the road to our annual fishing trip.

Paul, on awakening, thrashed about, snorting, and more loudly than necessary, “God, another one of those wretched dreams”.

Of course these words fell on understanding ears since we too had experienced just such as he had; empty classroom for an examination, a many-roomed, enormous building of no purpose, leaden legs that refused to move, and on and on.

Then Ara, usually a taciturn fellow, asked, “I wonder if either of you have had a recurring, vivid image, occurring always under the same circumstances while fully awake?” He was not taken aback by our bafflement at these words and replied, “Let me tell you about what I see in my mind’s eye almost every time I clean my plate of food.

“Since childhood it is my habit, reflecting that of my family and its history, to leave nothing in the plate. To this day I may wipe my plate clean with a piece of bread and even slurp soup. Most of my life that was just a habit. Then a couple of scenes changed it into a ritual if not a paean. The first was a photograph taken in a Biafran refugee camp of a widowed mother of six under a canvas fly all of whom were near death from starvation. The second was also a photograph, much older by almost a century, of a similar scene without the protection of a piece of canvas, this one a gaunt mother gazing down at her daughter’s corpse while her two cadaveric brothers stood awaiting the same fate. This one on the banks of the blood soaked Euphrates River at Deir Zor in Syria. Is she my Great Aunt? So when I see a sesame seed, all that’s left in my plate, I wonder what those children would have done to that solitary morsel. Then I do what they would have done.”

PrevOur Irrepressible Conflict
Some Thoughts on the Empty Heart of ModernismNext