Cutting Off the Head of the Snake

We cannot change our human nature, but we can monitor its political expression. 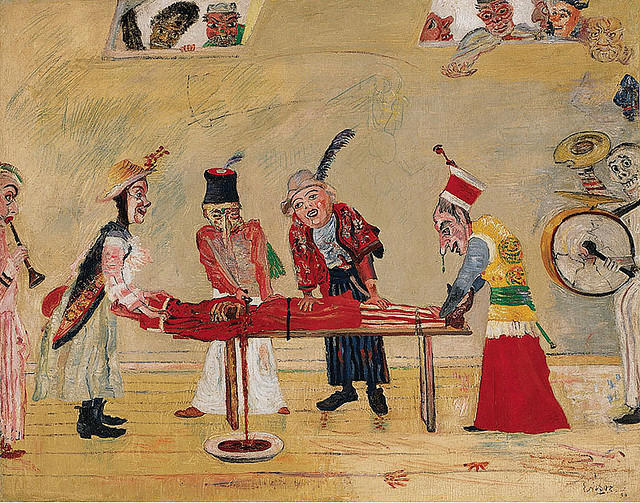 In a two-part article for PJ Media, “Desperate Times Call for Desperate Measures,” I attempted to dissect the subversive agenda of the major American cultural and political institutions and to suggest that desperate measures might be necessary to counter the accelerating drift toward “liberal” totalitarianism. My basic argument was that Leftism is not simply a political philosophy like any other. Indeed, the Left’s motivating practice is encapsulated in Jean-Jacques Rousseau’s dictum from The Social Contract: “If anyone, after publicly recognizing these dogmas, behaves as if he does not believe them, let him be punished by death.”

This is the true face of the adversary we confront, in essence a totalitarian force that must be combated, at least in its institutional manifestations. The Leftist serpent has poisoned almost every dimension of the culture, but it may yet be thwarted at the higher tiers of government policy. Constitutional defenders seem reluctant to take definitive steps on the gerundive level to sever the head of the political snake, which is what must be done. The body of the culture may then continue writhing, but it would arguably lack the institutional means to effectively re-grow the mobilizing appendage.

“The real enemy of the USA,” writes Michael Young, “is the malignant ideology of the progressive left, which has been the enemy of our form of government since day one.” It is an enemy arguably more pernicious and threatening than any external foe. Allowing the current state of affairs to malinger in the hope that this or that social movement or cultural re-set will somehow diminish or eradicate the threat, or prosecuting a few bad apples while neglecting to prune the rest of the tainted orchard represents a quick fix that is no fix at all.

Naively believing that “free thought” and conservative ideas will of themselves gradually defeat the Progressivist agenda is a non-starter. You can’t temporize with evil, especially when it festers in your own home. Patricia McCarthy, for example, fully agrees that the Left has “descended into the abyss of revulsion from which they are not likely to recover any time soon.” Her solution? “We need to fight back as conservatives have never before fought back.  This left needs to be repudiated.” Well, yes, that’s true. But again, how are we to do this? The battle of ideas goes nowhere since the Left is not interested in ideas, fights on another front altogether and never backs down. Any defeat the Left suffers is welcome but it is always only temporary. Anti-Left legislation can be stalled in Congress or overturned come the next election. Leftism, which makes a virtue of the seven cardinal sins, is demonstrably evil. It will not relent in its project to subvert the nation.

As Christopher Knight cogently remarks, “the inevitable mission of Progressivism is not to win a battle within society, but to wage continuous war against it.” The tsunami of lies, slander, ridicule and quasi-legal investigations launched against President Trump are instances of how this war is currently being waged. We are pretty well assured that the so-called Deep State (and its allies) is determined to halt the Trumpian commitment to revitalize the country. The concerted aim is to bring America back to the Clintobama nightmare, and there is conclusive evidence that there were and are three successive plans to carry out its purpose.

Plan A: The election of Hillary and/or her subsequent exoneration on charges of crimes under the Espionage Act.

Plan B: manufacturing an alleged crime supposedly committed by Trump where no crime exists in the law, e.g., the so-called Trump-Russia “collusion,” thus envisioning impeachment via the 25th amendment.

Plan C: If all else fails, assassination. According to Roger Stone, formerly a senior campaign aide to Richard Nixon, Ronald Reagan, and Bob Dole, “it’s easy to misread the deep enmity and hatred that the globalists and the [i]nsiders have for this president, and to underestimate their resolve to remove him,” including “killing the president.” We recall that four sitting presidents have been assassinated in the course of American history and two more have been wounded in the attempt, so this scenario is by no means unprecedented. And considering the rumours of mysterious political deaths over the last decade or so, though one must guard against succumbing to the conspiracy bug, one cannot allow oneself to become complacent. Whatever we make of it, the list is disturbingly long.

Whatever plans circulate through the alphabet, one thing is certain. The Deep State and its multifarious adjuncts, agencies and outliers will not rest in their efforts to thwart Trump’s domestic and foreign policies, to remove him from office one way or another, to revert to Beltway business as usual and to revive the Carter/ Obama/Clinton ulterior purpose: Make America Small Again.

It is not enough, however, merely to say that the Democratic Left is a totalitarian enterprise. If this is true, then it behooves us to offer definitive solutions, to recognize that analysis and verbal alarms are not the equivalent of Paul Revere’s legendary ride and will not deter a dedicated adversary intent on subversion and treason. The only sincere and loyal president since Reagan must be prepared to take desperate measures.

I should explain what I mean by desperate measures. As I wrote in my aforementioned articles, the academy, from which the ideological contamination has spread, should be selectively defunded. A sectarian press, which is not “free” but a propaganda arm of the Marxist axis, should be prosecuted for flagrantly violating the SPJ Code of Ethics. Organizations with the intent of sabotaging a constitutional republic—the ACLU, the Southern Poverty Law Center, Planned Parenthood, among an innumerable host—must be disbanded.

Similarly, powerful corporations that use their wealth and influence to eviscerate the economic, social, cultural and political structures meant to sustain a strong and prosperous nation—such corporations as the Tides Foundation, the Ford Foundation, and the infamous Clinton Foundation—have to be neutralized, and individuals whose billions go to fund the revolutionary enemies of the Republic and foment schism and turmoil must be arrested, deported or extradited. In addition, guerilla outfits like Antifa need to be declared domestic terrorists and face the might of a loyal military.

How would such measures be enacted? Considering that most people have no stomach for the Insurrection Act or the Posse Comitatus Act, Article III, Section 3, Clause 1 of the Constitution, which provides grounds for the prosecution of treasonous acts against the Republic, would then be the optimal route—even if the President must use his “pen and phone” to enact it. Under the circumstances, this is the only way to cut off the head of the snake. Where sedition and treason proliferate, it must be met decisively; otherwise, it will continue to destabilize the nation and work its totalitarian will in perpetuity. Of course, Leftist sentiment and socialist convictions will persist. The vices of human nature may not be capable of reform, but its institutional expressions can be curtailed.

I am a firm believer in the adage that as America goes, so goes the world. If America collapses, the rest of us will not be far behind. We are all, in a certain sense, American citizens by proxy. I am a Canadian citizen by birth, but I know that Canada is essentially an international backwater and a pocket of global insignificance, typified by the jejune antics of our current Prime Minister. America must survive, whatever it takes, if we too are to survive. It is to our advantage, even as foreigners, to wish President Trump success in his efforts to take back the country and Make America Great Again. Should the pushback against a totalitarian foe require desperate measures, so be it. The time for rhetoric has long passed.

David Solway is a Canadian poet and essayist. His most recent volume of poetry, The Herb Garden, appeared in spring 2018 with Guernica Editions. A partly autobiographical prose manifesto, Reflections on Music, Poetry & Politics, was released by Shomron Press in spring 2016. A CD of his original songs, Blood Guitar and Other Tales, appeared in 2016. Solway’s current projects include work on a second CD, The Book of Love, with his pianist wife Janice Fiamengo and writing for the major American political sites such as PJ Media, American Thinker and WorldNetDaily.