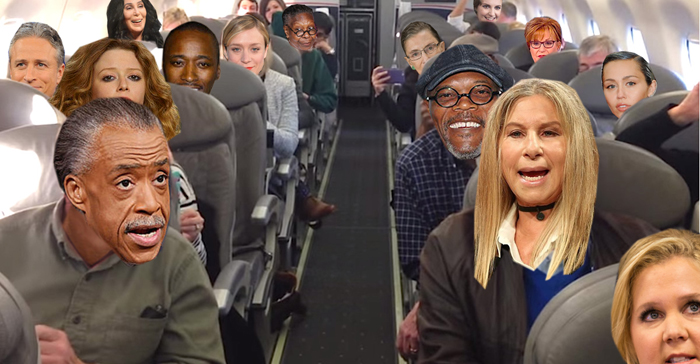 Over two years ago, celebrities—especially Hollywood celebrities—took time off from snorting cocaine to declare—no, to promise—that they would leave the country if Donald Trump became President of the United States. They promised!

Amy Schumer said she would move to Spain.

Miley Cyrus wasn’t too specific, she just promised to move away. Which is great. Amber Rose also did not reveal where she would move. Whoopi Goldberg also wasn’t specific and we’ve had to endure over two years of her screaming in The View, along with her fellow shrieker, Joy Behar. Listening to them is like listening to fingernails across a chalkboard. Leave! Leave! For the love of God, please leave!!

Omari Hardwick said he would move to Italy. Ciao, baby.

Raven-Symoné said she would go to Canada. So did Chloë Sevigny. So did Keegan-Michael Key. So did Lena Dunham. So did Neve Campbell. But they didn’t. They’re still here. Why?

Barbra Streisand said she would go to Australia—they may not let her in. (I understand that playing her songs have been banned by the Geneva Convention).

Eddie Griffin and Samuel L. Jackson would move to Africa (a first!), specifically South Africa — just in time to enjoy the racist government there confiscate property from whites. They might enjoy that.

Cher would move back to Jupiter (I always knew she wasn’t really from Earth). Jon Stewart also promised to leave Earth, but he wasn’t specific as to which planet (or solar system) he would go to. Perhaps NASA could help them? Or the Russians?

Spike Lee said he would move to Brooklyn. He might as well be moving to another planet.

Natasha Lyonne said she would go into a mental hospital. It’s admirable that she would finally go get help.

The media-created Al Sharpton wasn’t specific as to where he would move to. The problem is that he’s still here.

Read More in New English Review:
Western Culture, 2000 AD (or is it CE?)
First as Tragedy, Then as Farce: How Marx Predicted the Fate of Marxism
Available Illusions

Ruth Bader Ginsburg would move to New Zealand to live with her fellow hobbits. If she left now, she could join Christine Blasey Ford who said she would move to kiwi land if Kavanaugh became Supreme Court judge—right after she collects the million dollar reward for slandering Kavanaugh.

Vodka-loving Chelsea Handler declared she would move to Spain—a whole country full of men that she hasn’t had sex with!

And just a few days ago, third-rate writer named Kurt Eichenwald announced that now that a Texas judge struck down Obamacare, both he and his wife would be leaving the country. Which prompted the incomparable Sebastian Gorka to reply, “Why wait?” (however, Eichenwald should be informed that East Germany is no more).

But, sadly, no one wanted to move to Mexico—which is strange, very strange, because they are all for opening up the southern border—at the same time that they live in gated communities.

Anyway, celebrities and pundits said that the country would become “a nightmare.” This “nightmare” was unspecified for the most part, but we were given the impression that the seas would rush across the land, penguins would become maneaters, a comet would come crashing down and giant bats would swoop down from the sky.

Yes, some nonentities were specific, in a general sort of way, forecasting a replaying of the Reichstag fire and others saying that there would be a Fourth Reich.

So where is my Fourth Reich?

True, some have said that we are already in the Fourth Reich, but I don’t see anything like I would have imagined it to be.

How disappointing. How boring.

It’s been over two years and they still haven’t left which would improve the quality of life in the country.

Why won’t they leave?