Deconstructivist Architecture: “I never try to make anything beautiful.” 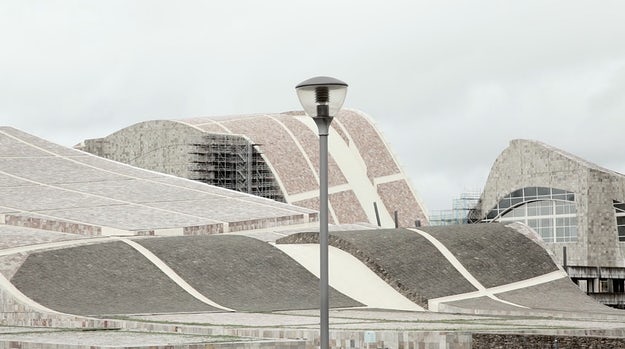 The never-completed and now-abandoned City of Culture of Galicia, Galicia, Spain

One question which often circles my mind: will the future of architecture be bleak or full of promise? On one hand, I am optimistic. A minority of voices are starting to be heard acknowledging the damaging effects of contemporary urban environments, also the body of evidence accumulated in more recent years hailing the psychological benefits of traditional architecture is welcomed news. But at the same time, I have little faith in architecture’s redemption. It cannot be ignored that countless acres are currently being covered in parking lots and lifeless concrete condos at a startling pace. The scale of this enterprise can be almost too much to bear.

Unfortunately, the woes facing architecture today was highlighted in a recently published article. It was announced that Peter Eisenman—famous Deconstructivist architect—was awarded the 2020 Kanter Tritsch Medal. The prize is awarded to an “architect who has changed the course of design history, with a particular focus on the areas of energy conservation, environmental quality, and/or diversity.” While it is not clearly stated how Eisenman has affected these areas, I can say with absolute certainty that Eisenman is in no position to be awarded prizes.

Deconstructivists like Eisenman have in many ways ruined the reputation of architectural professionals. Deconstructivists do not wish to render the world a more beautiful place to live. Their ultimate goal is to create an architecture which is alienating, and anxiety inducing. For roughly one hundred years architecture’s demise has been extensively recorded, but the age of Deconstructivism will be remembered as one of its worst periods. However, clever marketing would like you to believe that Deconstructivists are heralding a new era of golden architecture; this, of course, is humbug.

Eisenman is considered a sort of high priest among Deconstructivists. Frequently cited for being one of the most important 21st century architects, Eisenman has swooned many professionals. Chair and Miller Professor of Architecture, Winka Dubbeldam said:

Peter always pushes the boundaries of architecture and has given architects so much to think about over the past 50 years. And then there is his stunning built work: Who else could have created the Holocaust memorial in Berlin? It is such a social space of healing.

In spite of the laurels, Eisenman’s career is full of troubling details, which are too great to ignore. Not only are his works fantastically awful and crossed ethical boundaries, Eisenman openly confesses his indifferent attitude to the welfare of his users.

Eisenman was born on August 11th, 1932 to Jewish parents. He attended post-secondary school and eventually earned his Ph.D. from the University of Cambridge. His first glimpse at recognition happened when he became a member of the New York Five in the 1970s. Around this time Eisenman’s designs were usually white exterior surfaces in simple geometrical shapes, much in the vein of Le Corbusier.

Eisenman around this time was commissioned by Suzanne and Richard Frank to design a 1500 square foot home, which was completed in 1975 and called House VI. Eisenman designed the home with no care for utility, technology, aesthetic value, or context; he was only interested in his “geometrical transformations.” The result was a sort torture chamber. Noteworthy peculiar features: an upside down staircase (of no obvious use); a glass section in the floor, wall, and ceiling, preventing husband and wife from sleeping in one bed; a useless column which hovered above the dining table separating dinners. Some years later, the house suffered terrible roof leaks and assorted other structural problems, requiring an expensive two year renovation.

Other than being a bizarre home, House VI represents a new journey for Eisenman. The style for which he is known would come years later, but he had successfully taken on for the first time—or at least first documented—an attitude which placed users at the bottom of his hierarchy of importance.

A highly successful exhibition was held in 1988 in New York’s Museum of Modern Art. It was described by Philip Johnson, curator of the exhibition, in the book Deconstructivist Architecture:

It is a confluence of a few important architects’ work of the years since 1980 that shows a similar approach with very similar forms as an outcome. It is a concatenation of similar strains from various parts of the world.

Eisenman was invited as one of the exhibition’s contributors, and along with others, displayed models and renderings. Eisenman was given the opportunity to design the first major public Deconstructivist building which was completed in 1989.

The Wexner Center for the Arts (Columbus, Ohio) contained all the hallmark properties of Deconstructivist architecture. With white “scaffolding” and brick “turrets”, it distorts and fragments; the building displaces form, but not to the extent that it destroys it. To many, the building symbolizes a liberation from classical rules by breaking all ties with the familiar. But the building has become an omen to the numerous visitors each year. Due to the convergence of intersecting planes, it is reported that people become ill from disorientating visuals.

In his book, Conversations with Peter Eisenman: The Evolution of Architectural Style, Vladimir Belogolovsky records an interesting interview with Eisenman. They eventually get to the subject of the Wexner Center, and Belogolovsky asks:

It is known that your buildings make some people feel disoriented and even nauseous. Is it intentional? What message do you try to send in your work?

I am interested in displacing traditional reactions. I want people to be aware of their physical surroundings. I do not necessarily want them to be sick. I want them to feel differently, to be active rather than passive because the media world that we live in, made us become passive. There is no connection between body, mind, and eye. What architecture can do, which no other discipline can, is to relate the body, the mind, and the eye.

Evaluating Eisenman’s reply, one gathers that so long as Eisenman’s architectural goals are met, even if people are made sick as a result, that is all that matters to him. Also, note the lack of apologetic tone; if Eisenman truly cared or regretted what he had designed, there would be evidence of this in his subsequent works. But alas, this is not true! If anything, his works have only become more demented over the years.

Eisenman is not a prolific architect, but all his works seem to exhibit the same thing: hostility toward users. It is as if Eisenman disdains what is harmonious. This hunch is confirmed later in Belogolovsky’s interview when Eisenman says, “I never try to make anything beautiful.”

Eisenman’s City of Culture (Galicia, Spain), after twelve years of construction and at a cost of 287 million euros was halted and left unfinished; I wonder whether Spanish citizens would have been thrilled at hearing that the leading architect never had the intention of designing anything beautiful in the first place? I am sure this egregious example of architecture will haunt locals for both being a symbol of reckless spending and as a testimony to the failure of Deconstructivist architecture.

Some may find it difficult to criticize Eisenman without knowing his theory of architecture. But, rest assured, there is no “theory” to be detected in his literature. In his book Blurred Zones: Investigations of the Interstitial, Eisenman is non-sensical:

It is possible to blur and displace traditional presence—to conceptually dislocate the stability of place—and if the sign can become less motivated to move toward an indexical condition, this then leaves the condition of the subject.

The interstitial must be theorized differently from the idea of poché, which presumes a base condition where the solid preexists the void. In the interstitial there is no necessary primacy of origin of either solid or void. Where poché is the result of a mute solid being eroded by an active void, in the interstitial, solid and void are active simultaneously.

The texts of function, site, and program and the texts of the interiority and anteriority of architecture together define a traditional practice. Architects always define what they do in relation to these texts because it is impossible to do architecture without recalling its anteriority, its interiority, or its singular condition of sign and signified as functioning things.

This unintelligible philosophy has benefited Eisenman in two ways. Eisenman could never have assembled his apostles by clarity. The advantages lie in obfuscation and grandiose jargon. Firstly, obfuscation insulates a body of work from criticism, because it cannot be fully understood, and secondly, words such as “interstitial,” “anteriority,” and “poché” gives the appearance that one has carved out groundbreaking ideas via a sophisticated language. This technique, I believe, has been an instrumental component to Eisenman’s success.

The current architectural establishment is nothing short of a paradox. Rather than commend the works of aesthetic merit, it stubbornly praises its own degeneracy. It is difficult, if not impossible, to fathom that a body of professionals with all its combined years of education and experience find no qualms in the peculiar endorsements of Eisenman. It highlights a disturbing psychology embedded deeply within architectural circles, wherein discomforting and alienating works earn recognition.

Eisenman, I imagine, will continue to receive awards so long as he is alive, alongside with other Deconstructivists. Perhaps, his influence will wither away with the passing of time. I find this unlikely. The more probable outcome will resemble the life of a stubborn weed, which must be entirely uprooted for it to cease.