Dimensions of Failure: A Review of Le Corbusier, the Dishonest Architect 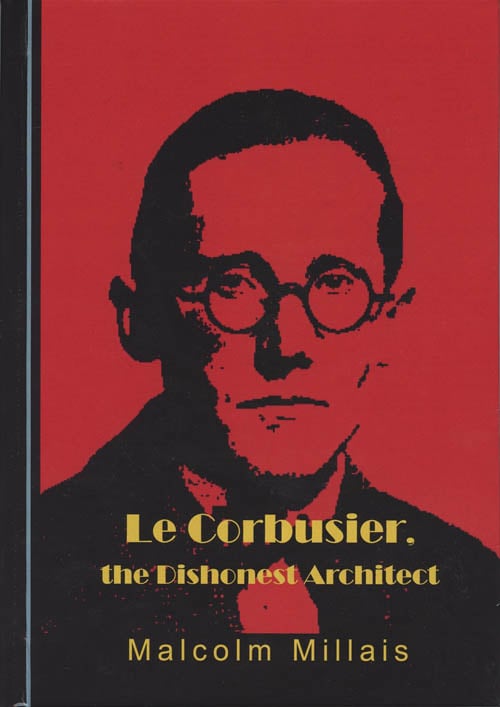 e Corbusier, the Dishonest Architect, by structural engineer Dr. Malcolm Millais, is a refreshing analysis of a towering figure who shaped the architecture of our time. Millais harshly criticizes Le Corbusier. One of our most insightful writers, Dr. Theodore Dalrymple, published a glowing review of Millais’s new book, wholeheartedly dismantling Le Corbusier and his work. This goes to the “nerve center” of the trillion-dollar global construction industry. The present review supports Millais’s attempt at clarifying what has been hidden for decades, since it conflicts with assumed truths in architectural culture.

Architecture schools teach students a jumble of opinions, design techniques, and an underlying philosophy of human dwelling. Much of this material doesn’t make sense to ordinary people, but that’s the way architectural culture has operated for decades, and has thrived. One central belief, however, is clear and unambiguous: Le Corbusier was a great genius who helped to found the architecture and urbanism almost everyone practices today. Criticism of his work, or his person, is equivalent to religious apostasy. In academia, even more than in the profession, anyone who dares criticize “Corbu” risks the sudden end of his/her career.

At least one (usually more) thick, well-written hagiography by a respected architectural critic appears every year. Le Corbusier is supposed to have saved humankind from its retrograde and stubborn habits of building humane settlements. Like other prophets before him, he revealed immutable laws to the ignorant masses, such as the nostalgic folly of ornamenting their houses, and the futility of wishing to raise their children in friendly spaces and gardens.

Dr. Millais instead offers a contrarian opinion: “The truth is [that Le Corbusier] was a sham, a fake, a charlatan whose only gift was for self-publicity”.

Millais uses facts and reasoned arguments to show that Le Corbusier was ignorant of tectonics, as his canonical buildings have been falling apart since their day of completion. Millais exhaustively collects results from many other investigators; some crucial biographical ones from as late as 2015, when Le Corbusier was exposed as an anti-Semitic Nazi-Fascist collaborator.

A dark side to human society is that it is more than willing to gloss over—and even suppress—despicable behavior in persons who are judged as otherwise useful. So the question arises: does Le Corbusier’s work override his exploiting women and writing things like “Hitler can crown his life with a magnificent work: the remaking of Europe”? (This in 1940!) A critical examination of the facts in this book shows otherwise. Frustrating those who wish to protect his image untarnished, there is no saving grace in Corbu’s ideas or actual production.

Millais’s original contributions reveal Le Corbusier’s proportional system of design known as the Modulor to be just another sham among many. The Modulor is a mystical system of numbers that Le Corbusier claimed, if used for a building’s measurements, would result in a perfect design. I detailed the mathematical fallacy behind the Modulor (see “Applications of the Golden Mean to Architecture”), while Millais carefully measured Le Corbusier’s buildings to find few if any Modulor scales!

Millais analyzes numerous structural faults with the iconic 1952 Unité d’Habitation apartment block in Marseilles, France. Here is the original model for dark, dreary, double-loaded internal corridors, and apartments with one side in darkness and the other with impossible glare. Cult followers reproduce it as a perfect prototype, whereas Millais’s authoritative conclusion is damning. How could a building containing so many errors of design and construction—most due to untested ideas—have received a permit? The answer is that the Housing Minister waived all building regulations. Architectural culture deliberately ignores all these faults, while critics endlessly repeat self-serving lies that Le Corbusier himself invented to cover up his ignorance and mistakes. 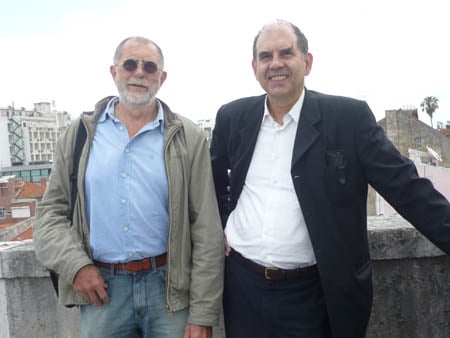 Malcolm Millais (L) with the author.

Le Corbusier’s unbuilt design for slaughterhouses for the French industrialist Max Du Bois was recycled to become the Unité d’Habitation (as noted by Le Corbusier biographer H. Allen Brooks, who also found that Le Corbusier suppressed this reference). Later, Le Corbusier revisited this macabre theme in his idea for the Philips Pavilion, a building financed by the Dutch Electronics Company Philips for the 1958 Brussels World’s Fair. Corbu describes his chilling idea: “It should appear as though you are about to enter a slaughterhouse. Then once inside, bang, a blow to the head and you’re gone.” So, Monty Python’s 1987 The Architects Sketch starring John Cleese was spot-on after all.

Not included in Millais’s book is the following revealing story. Pandit Jawaharlal Nehru invited Le Corbusier to India, with unfortunate consequences for Chandigarh. Madame Manorama Sarabhai commissioned a private villa in Ahmedabad from the architect, but expressed serious concerns about the lack of a railing on the terrace and balconies. Here is Le Corbusier’s response, as related to journalist Taya Zinkin:

The good woman was afraid that when her sons get married their children would fall off and kill themselves, as if I cared. As if I, Le Corbusier would compromise with design for the sake of her unborn brats!

Moving on to other architectural icons, the Chapel of Notre Dame du Haut in Ronchamp, France is widely asserted to be the world’s most inspired recent example of religious architecture. Père Marie-Alain Couturier naïvely believed he was commissioning Le Corbusier to erect a house for Christian worship. Yet Millais documents that Mass could hardly be celebrated in this “liturgically dysfunctional” Chapel. The architect smugly built a temple to himself. Architecture students from all over the world make a pilgrimage to this out-of-the-way place to worship Le Corbusier. Furthermore, the “divinely-inspired originality” of this structure plagiarizes indigenous buildings under cliff overhangs from Les Beaumettes in Provence, France, as identified by my friend, architectural theorist Michael Mehaffy.

Extending his expertise to planning, Le Corbusier declared that he knew how to build the “city of the future”; for which he provided voluminous, if confused, instructions. Europe’s cities were rebuilt to his model following their destruction in World War II. Elsewhere in the world, governments assumed the role of the British/German/US bombers and cleared traditional human-scaled urban fabric so that the Corbusian anti-city could be erected. The results, such as we see throughout the globe, and especially in the developing world, are socially disastrous. The cold-blooded Le Corbusier considered humans as numbered animals to be herded into industrial cells.

Millais does us a favor by bringing together all of Le Corbusier’s crazy, half-baked, inhuman schemes for cities. Distinguished commentators have condemned those individually. Yet seeing the whole picture becomes as frightening as it is repulsive, and goes a long way to explain the man’s monstrous megalomania. Apparently, his urban vision was a horrible plan for culturally racist and supremacist social engineering. Government planners and politicians, goaded by fawning academics, implemented this nightmarish scenario, eagerly destroying living urban structure throughout the world. Those who suffered most were the poor.

As for Le Corbusier’s messianic ambitions, Millais documents how H. Allen Brooks discovered in Le Corbusier’s personal copy of Ernest Renan’s A Life of Jesus underlined passages that point to Le Corbusier considering himself a latter-day parallel of the Christ.

A recurrent theme throughout this biography, like the refrain in a children’s song, is Le Corbusier’s dishonesty: lying, stealing originality from anybody he could, betraying those who helped him, being driven by opportunism, and stepping over cadavers in his monomaniacal quest for glory. Again, these facts are routinely suppressed so that architecture students don’t get frightened. Or maybe it is in order to shield an architectural culture that has made lots of money and achieved immense global power by embracing these same vices.

But can Malcolm Millais dethrone this individual who is widely considered to be the towering Twentieth-Century figure in architecture and urban planning? The psychology of religious cults and the economic notion of “investing inertia” prevent this. Once a charlatan is accepted as cult leader, cult members will maintain their undying loyalty, and any questioning of the cult dogma unleashes extreme hostility. The system grows deep and powerful as its founding masters assume mythical authority. I have personally experienced nasty and violent reactions after criticizing Le Corbusier, from architects who are educated and reasonable people!

There are many obvious instances of this, which would be highly embarrassing in any other professional discipline. For example, since 1933, cult followers have incorporated horizontal slabs called brise soleils into their windows, mindlessly imitating Le Corbusier. Other cult followers award prestigious architecture prizes to buildings that sport brise soleils. Millais points out that a few minutes of measurements are enough to show they don’t work to shade the sun! Architectural culture continues to implement easily disprovable practices that have been transformed into dogma.

I often wondered whether Le Corbusier’s brain had some abnormality because he did not see obvious visual patterns; confusing, as he did, maximum with minimum complexity (see A Theory of Architecture, page 142). The fact that he was nearly blind and lacked three-dimensional vision—suppressed by most biographers but noted by Millais—is suggestive but not enough to explain this discrepancy. Ann Sussman has carried out research measurements that suggest Le Corbusier was autistic due to a specific genetic disorder, and saw the world in a very different manner from normal individuals (see “The Mental Disorders that Gave Us Modern Architecture”). Because of this abnormality, he could not handle organized complexity in a building’s façade but only blank, flat walls.

Le Corbusier convinced others—those who believed him and created the cult—to impose his unnatural preferences upon the rest of the world. Gullible architects, clients, and critics influenced the course of the discipline, wrongly assuming that all of this was a sign of “novelty” instead of a rare pathology. A sort of “geometrical fundamentalism” was imposed on our world by the powers-that-be.

This excellent book by Malcolm Millais should have been around for the last fifty years. It might have saved us from architectural and urban design mistakes, now ingrained in architectural and planning cultures. As Millais says, “This is not a book for architects.” No revelation—no matter how shocking—can tarnish this hero’s reputation among architectural true believers. Yet we need to delete Le Corbusier’s ideas from practice if our world is to become healthy once again. I’m glad that a book such as this one is finally available for concerned citizens to read, and then to marvel at (or be appalled by) human credulity.

As this review goes to press, the best way to purchase this book is directly from the publisher.