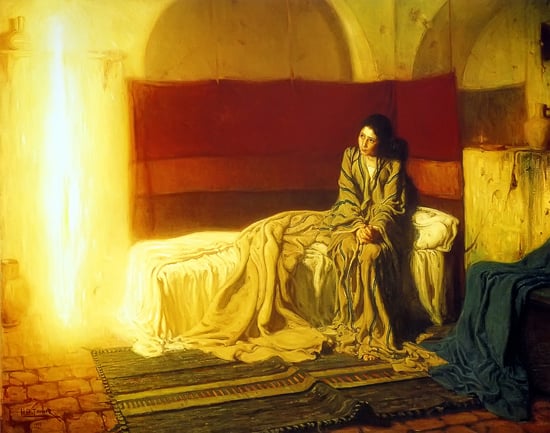 When most atheists and theists discuss God, one thing that always stands out as an enormous problem is the existence of suffering and evil, despite many atheists not believing in the latter. They argue: how could an all-loving, all-powerful God create such a world of perpetual misery punctuated by brief moments of joy? The short answer to that profound, emotional moral question is: Freedom of the Will and an eternal afterlife of bliss, void of any pain or suffering.

On moral evil, God gives us freedom to choose what to do rather than use us as puppets, rendering us soulless. However, with this freedom, some people unwittingly inflict suffering onto themselves, while others inflict it onto other human beings. As for natural evil (earthquakes, volcanic eruptions, tsunamis, etc), such phenomena are requirements for sustaining a stable, functioning earth, thus maintaining the survival of human creatures lucky to escape the fatal consequences of the above.

For instance, in a Godless universe, a tsunami killing thousands of people is both good and bad: bad for those unfortunate people who suffered and died, but good for the marine life which feasts on the victims who drowned. This brings us on to the subject of Heaven: does it exist and will the victims of tsunamis or other fatal misfortunes, both moral and natural, go there? For if it does exist, then any Christian who drowned and was killed in a tsunami or any other natural disaster and is redeemed by God, will have his or her earthly sufferings curtailed while entering the bliss of eternal life in Heaven.

Read More in New English Review:
What did Job Say?
Happiness and Children
First as Tragedy, Then as Farce: How Marx Predicted the Fate of Marxism

But it’s much deeper than that. Imagine a world in which there is no suffering or evil, permeated with good and pleasure, would it make life mundane or destroy the joys of Heavenly bliss in the afterlife? In such a perfect world, we would have no concept of pain or suffering, thus Heaven wouldn’t be a big deal or improvement on our comfortable existence on earth. Furthermore, in such a perfect world, we would never feel the need to seek God.

Most people have reflected on such a profound question but there are those who claim they have died and come back from the ‘dead’ to tell of their experience. Such a phenomenon is called Near Death Experience (NDE: always be conscious of the letter ‘N’ in the initial cluster: ‘Near’, not ‘Dead’).

There have been many best-selling books and articles on this fascinating subject. Some have claimed they arrived in Heaven and spoke to dead loved ones and even met with Jesus. They tell these stories after they are allegedly told ‘it’s not time yet’ and ‘return from Heaven’. However, is it really Heaven they experienced when going through an NDE? Or could it possibly be that God projects heavenly images to the mind of someone going through such an experience in order to make things easy for them during such tremendous upheaval and stress?

One such story on NDEs is that of the world-famous atheist philosopher, AJ Ayer (1910–1989), who choked on a piece of salmon. It’s worth bearing in mind that Ayer belonged to a school of philosophy called the Logical Positivists. This school rejected all concepts which could not be verified by logical analysis or experiment, a kind of dogmatic scientism. In other words, anything outside the realm of science was nonsense if it couldn’t be verified (so one can imagine how an NDE would be looked at by a sceptical, Logical Positivist philosopher).

However, the school eventually disbanded when it realised its philosophical blunder that any such verification statements would also have to be verified mathematically and scientifically. But back to Ayer. While in hospital, in order to ascertain whether the philosopher had suffered any brain damage, Dr Jeremy George and a colleague had to subject Ayer to a general knowledge quiz to test his brain.

‘I think we asked him who the prime minister was, and what day was it,’ said Dr George. ‘The answers quickly shut us up. They were all correct.’ That same day, having finished his rounds, Dr George returned to Ayer’s bedside. ‘I came back to talk to him. Very discreetly, I asked him, as a philosopher, what was it like to have had a near-death experience? He suddenly looked rather sheepish. Then he said, “I saw a Divine Being. I’m afraid I’m going to have to revise all my various books and opinions.”’

‘He clearly said “Divine Being”,’ said Dr George. ‘He was confiding in me, and I think he was slightly embarrassed because it was unsettling for him as an atheist. He spoke in a very confidential manner. I think he felt he had come face to face with God, or his maker, or what one might say was God.’

Later, when Dr George read an article by Ayer in the Sunday Telegraph (‘What I saw when I was dead’, 28 August 1988), he was surprised to see he had left out all mention of it. ‘I was simply amused. I wasn’t very familiar with his philosophy at the time of the incident, so the significance wasn’t immediately obvious. I didn’t realize he was a logical positivist.’ Ayer allegedly said he remained an atheist, despite the experience.

Another story in more recent times was that of a young boy who had an NDE. The boy’s father, a pastor in Nebraska, US, said his son had a vision of Heaven, while the youngster was suffering a near fatal illness in 2003.

The boy’s account of Heaven, where he said he met Jesus riding a rainbow horse, includes angels singing songs. Although the boy sounds sincere, does his story seem far-fetched and the stuff of hallucinations? It’s difficult, if not impossible, to know with certainty if these accounts of NDEs are authentic experiences of the afterlife.

But most of them, although not all, share one thing in common: the person claiming to have the experiences usually feels a sense of calmness, peace and drawn close to a heavenly realm of light. Which brings us to what Heaven is. The Catholic and Protestant understanding of entering Heaven are the subject of another larger essay. But to give a couple of examples, the first from an Anglican perspective, consider the words of philosopher JP Moreland.

Moreland highlights the relationship between free will and Heaven. He says if you were to force people to do something against their free choice, you would be dehumanising them. You would be saying that the good of what you want to do is more valuable than respecting their choices, and so you’re treating people as a means to an end by requiring them to do something they don’t want. ‘That’s what it would be like if God forced everyone to go to Heaven.’ In the book, The Case For Faith, by Lee Strobel, Moreland adds:

If God has given people free will, then there’s no guarantee that everybody’s going to choose to cooperate with him. The option of forcing everyone to go to Heaven is immoral, because it’s dehumanizing; it strips them of the dignity of making their own decision; it denies them their freedom of choice; and it treats them as a means to an end. God can’t make people’s character for them. And people who do evil or cultivate false beliefs start a slide away from God that ultimately ends in Hell.

However, The Catholic understanding is that many of those who experience great remorse for their sins and don’t reject God, enter Purgatory: it is appointed for people to die once, and after that comes judgment (Hebrews 9:27). Such a purification is necessary for those not in a state of grace in order to enter Heaven. And it makes sense that nothing unclean can enter the presence of God in the afterlife (Revelations 21:27).

St Catherine of Genoa, whose mystical experiences gave her a powerful insight about Purgatory, said:

[The souls in Purgatory] see all things, not in themselves, nor by themselves, but as they are in God, on whom they are more intent than on their own sufferings . . . For the least vision they have of God overbalances all woes and all joys that can be conceived. Yet their joy in God does by no means abate their pain . . . This process of purification to which I see the souls in Purgatory subjected, I feel within myself.

As for husbands and wives in the afterlife: Jesus said that no one will be married in Heaven. ‘At the resurrection, people will neither marry nor be given in marriage; they will be like the angels in heaven’ (Matthew 22:30).

For many non-believers, the idea of God or a spiritual realm called Heaven populated with angels seems far-fetched, particularly the existence of angelic beings. However, these disembodied spirits do not have robes, halos or wings. They do not resemble humans, but are guiding spirits, according to Scripture.

As for Heaven being a reality: in John 14:2, Jesus also assured us there will be a Heaven for real Christians who are redeemed. In the Second Coming, the souls of departed believers and unbelievers will be raised bodily from the dead. God will ‘stand’ in judgment: the redeemed will enter Heaven for eternity; the damned will be cast into Hell, separated from God for eternity.

In Heaven there will be no more suffering and pain; no more longing or earthly desires; all physical ailments or deformities will be banished; all psychological illnesses or emotional damage will end; the resurrected bodies of the saved will be free of defects and dysfunction. Consider 1 Corinthians 15:21-23 and 51-52: in verse 21, Paul says: ‘For since by a man came death, by a man also has come the resurrection of the dead. For as in Adam all die, even so in Christ all shall be made alive. But each one in his own order, Christ the first fruits, afterward those who are Christ’s at His coming.’

And he concludes: ‘For our citizenship is in heaven, from which we eagerly await the Saviour, the Lord Jesus Christ, who will transform our lowly body so that it may be conformed to His glorious body, according to the working by which He is able to subdue all things to Himself.’ (Philippians 3:20-21)