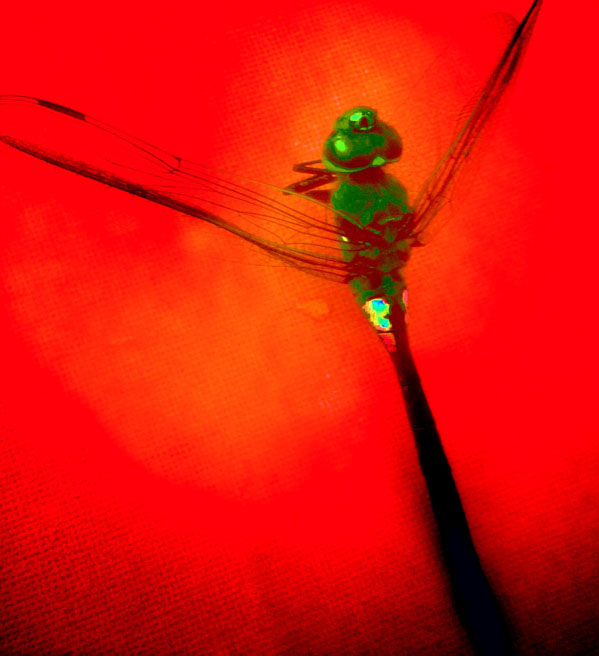 When I was twenty-five I broke down. I don’t know why. Thirty days here, thirty days there. Drugs, talk therapy. I told my boyfriend I hated him. The words didn’t seem like they were coming from me, but of course they were. I walked out of a clinic in the woods in Connecticut and hitchhiked to Portland—Oregon not Maine—where I heard you could live on the street and that drugs and food were free. I had stolen six hundred dollars from a patient who had been hoarding stray dollars for years. The first thing I did when I got to Portland was get a dragonfly tattooed on my back, a big glowing green one, with its wings spreading out along my shoulder blades and its tail ending at the top of my butt crevice. It cost me four hundred dollars. My shrink in New Canaan would have said that I chose this tattoo in this particular place because I wanted to be able to fly away from what I perceived was causing all my pain. Blah, blah. Maybe he would have been right. I don’t know why I did it. I just did it.

It rains a lot in Portland, and doesn’t stop for weeks on end. When I realized this I tracked down this trust fund guy who was crazy about me, who I had told to fuck off when he approached me when I first arrived. Every street person in Portland is weird and this guy was no different. He didn’t do drugs but he probably would have been better off if he did. Whenever he peed or thought of peeing or saw someone peeing, even in a movie or on TV, he cursed a blue streak. Fuck you, baby was one of his big ones. Interspersed would be things like, Yeah, you motherfucker. In between he was normal. He called his condition Urination Tourette’s. You could understand why I wasn’t attracted to him. But my money had run out and  he got a thousand dollars a month from a bank in New York and was more than happy to take me away from Portland.

We took a bus to Phoenix, and when we got there rented a room at the first cheap motel we saw. That night I expected him to want sex, and was ready for a fight, but he just wanted to hold me. When he got up in the middle of the night to pee, I heard only a long tinkling coming from the bathroom. The next morning there was two hundred dollars on the dresser and a note that said, I want my Tourette’s back. Good luck.

The motel was full of hookers, not the kind with hearts of gold, the kind who would scratch your eyes out if they thought for a second you were horning in on their trade. I stayed down and dirty and tried to avoid them, but one very hot night I was smoking in one of the chairs outside the front office when one of them, a big black girl with a blonde wig and mole on her cheek, came stomping over. Bitch, I work here, she said. I was confused at first and then I realized this was a spot where guys drove by to make their deals. Before I could apologize, she stepped behind my chair and shoved me out of it. I landed on my stomach on the butt-strewn asphalt in front of the office. I expected her to start kicking me or pulling my hair, but nothing more happened. When I turned and looked up, she was backing away. What’s that thing on your back? She said. What thing? That fuckin’ green thing. It’s the devil come to sew your cunt up, I said, go on back to Alabama. Again, the words didn’t seem like they had come from me, like when I told my boyfriend I hated him. But of course they did. The black hooker took her wig off and started crying and backed away into the night. I never saw her again.

The next morning there was a knock on my door. It was the Native American guy who ran the motel. Come with me. I did. I figured I was getting thrown out for fighting. In the front office there was a dog on the floor and a little boy lying next to him, holding him. I had seen them around, the boy and the dog, an inseparable pair. I realized that the boy was probably the motel guy’s son. What? I said. Snake bite. The motel guy lifted the boy away and showed me the two small holes in the dog’s flank. Rattler. I was mesmerized. Use your power, the man said. The dog was inert, his eyes vacant. Without thinking, I knelt down and sucked at the wound. A second later, the dog jumped up and was licking the boy’s face. They ran out of the office together.

My face must have turned ashen, because the man took my hand and led me into the room behind the front desk. He took a shirt off of a hook and handed it to me. You should cover your back, he said. I was wearing one of my usual halter tops. I put the shirt on.

Don’t be afraid, the man said. I am Zuni.

I didn’t respond. Afraid of what? Zuni?

Do you have money?

You can stay here for free.

Why should I stay here?

Your mate will come and you will fly off together.

Yes, you are Sivuftotovi Kachina.

I shrugged. Sure, I’ll stay.

Can you taste the venom?

It will make you stronger.

I shook my head. I was exhausted.

I was about to leave when the front desk bell rang. We turned and saw a man with a cowboy hat on and a bandanna around his neck. A good looking young guy. He smiled at us. Coming, the motel guy said.

The cowboy was signing the register as I walked through the tiny lobby. Somehow he was at the glass entrance door before me, his hand on the wooden handle. He pulled the door open for me. Thank you, I said. Ma’am, he replied, lifting the front of his hat, revealing light-blue eyes.

I thought about those blue eyes when I got back to my room. I was taking off the motel guy’s shirt, sitting on the edge of the bed, when I remembered something else: the cowboy’s hand on the door handle. It had a dragonfly tattooed on it.