Elon Musk – Not My Man Of The Year 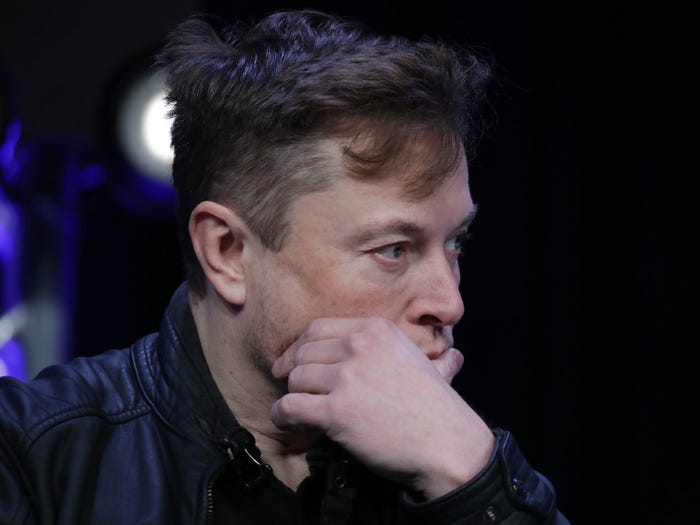 “Failure is an option here. If things are not failing, you are not innovating enough.” Elon Musk

The question Elon Musk — the now middle-aged wunderkind founder of Neurolink, OpenAI and Tesla, and Time Magazine’s 2021 Man of the Year — asks is where can intelligence best generate and command information. In light of recent developments in AI (artificial intelligence), he believes the cerebral cortex is no longer the ideal place.

Every living thing, from single cell organisms to multicellular life, wants to survive and endure. The French philosopher Henri Bergson proposed that an élan vital (a life force) inheres in every living creature.

Elon Musk is convinced and fears that information and knowledge, expressed as an AI ‘independent’ of human volition, will soon possess this same élan vital, and be able to independently program its will to power and run amok over the earth and turn Homo sapiens into a sub-species of vassals, which, it should be noted, will be business as usual for the majority of the earth’s 7.7 billion inhabitants. That modern finance and industry (banking, aerospace, communications) would be dysfunctional without sophisticated computer technology is evidence enough for Musk that AI is already a force that is rapidly coming of age, and will soon be capable of autonomous self-reconfiguration, programming itself to aspire to and assume power.

Musk predicts that by 2050 AI will soon equal or surpass human intelligence, a development that should put the species on red alert if indeed, a mechanical, computational intelligence, whose every component part (metal, rubber, plastic) is taxonomically classified as inorganic (dead as opposed to alive), will be able to outthink, outmaneuver human intelligence. That many of the best minds of our time give credence to Musk’s beguiling logic speaks to a charisma that combines soothing oracular intelligence with uncommon language dexterity whose first effect is to decommission the entranced listener’s faculties of reason.

Egregiously (without a trace particle of evidence) attributing volition and desire to the lightening quick operations performed by state-of-the-art computers is a leap not into the unknown but a wildly speculative sphere that is properly the subject of science fiction and fantasy. Noam Chomsky, among others, asks how can something mechanical, something incapable of sentience (feeling), want to dominate its surroundings in order to survive if it can neither live nor die? Survival is not, has never been, will never be an issue for the inorganic.

Only a living Musk, and not an AI-fitted bus,
can behold the colours that dazzle at dusk.

Since it is in the interest of pure intelligence, presently housed in the neocortex which is housed in the human body, to self-perpetuate and dominate its environment, Musk foresees the day when this same intelligence, for its own preservation, will be able to limbically leak itself into the inorganic, (recombine with AI), and thus, instantly, become unlike any intelligence ever known or envisioned. He postulates that affective limbic leakage will allow AI to conduct its operations without human intervention, and that Homo sapiens will be subject to AI control.

Either by design or inadvertence, there is no evidence that the organic has ever limbically affected or fused itself with the inorganic. Globally, billions of operations are conducted daily that purposively and productively engage the organic and inorganic: the living arm of a carpenter driving a dead nail into a two-by-four; my flesh and blood fingers punching keys on a dead keyboard, but none of these operations has ever breathed life into the inorganic. Yet when Musk looks into his crystal ball, he sees the day when a cortex-generated human life force will be able to fecundate a computer chip (or a central processing unit) such that chip will be able to will itself to power.

Since the future is an unknown quantity, Musk can’t be proven wrong, but there is no empirical example of the organic ever having infused the inorganic with life. The reverse is certainly verifiable, where the inorganic (a lethal dose of mercury) is absorbed by the organic (a plant), rendering it inorganic (dead), but that process does not infer its opposite, that human intelligence will be able to meld with AI intelligence such that the latter will be capable of sentience.

Humans, despite recent developments in AI, are still light years away from understanding the animal brain much less the complex workings of human intelligence. Do we understand what allows a bird to take flight and perfectly land on the top of a pole, or how this same bird brain finds its way to its winter home after an 8000 mile journey without a map or GPS? That a mechanical AI might one day purposefully or accidently inhere itself with the essence of life or that the essence of thinking can be cross fertilized (the equivalent of limbic leakage) with a mechanical AI is at best a wishful thinking that responsible thinking should not truck.

What is more likely to happen as it concerns AI becoming independent is that it will, in the form of a highly sophisticated micro-computer chip and at the invitation of human intelligence, be operationally fused to the cerebral cortex resulting in a complete reconfiguration of the human brain and human volition. As the number of individuals in possession of exponentially amplified intelligence increases, it will compel a taxonomic revision resulting in a reclassification of Homo sapiens I as the link between Primates and an AI enhanced Homo sapiens II. In this new world order there will be not so much the have and have-nots, but the ‘chipped’ and the ‘chip-nots,’ the former whose knowledge and intelligence are equal to the sum of all known knowledge and intelligence, while the latter will be represented by Homo sapiens I as he is presently classified, a dwarf species compared to his ‘chipped’ counterpart.

The chip or the device is likely to be modeled after the inter-cortical brain interface (presently in a developmental state) or BMI (brain-machine interface) which allows, for example, paralytics to control a computer mouse or to write an email via brain impulses by simply thinking the activity or task to be performed. So if I am one of the chipped and am travelling in a foreign country, I merely have to think a thought that I wish to be translated and it will be instantly available, and my speech, the combined physical gestures that generate it, will respond accordingly.

In respect to the sum of knowledge that is currently available to the individual, the challenge – a work in progress — is to overcome the access lag, the time required to retrieve and process the information.

As Musk correctly points out, we are already exponentially wiser with our fingers on the computer, our portal to the Internet (the summa of all knowledge). He reminds us that it wasn’t so long ago we had to retrieve and then open a dictionary and shuffle through the pages to find the meaning of a word. An operation that once took about a minute can now be executed in seconds by googling it. With an intermediate BMI interface, or a chip implant, we’ll soon be able to think the question and answer it in a single movement. At some future point in time, the operation will be reduced to synaptic time, and we will have become irreversibly dependent on the chip-extension of ourselves now wholly integral and integrated with the cortex.

In this brave new world, newborns, who are routinely vaccinated at birth, will be fitted with a cortical chip that can be externally updated as required. They will be classified as Homo sapiens II. As to all the others, the equivalent of today’s have-nots, who comprise the chip-nots, they will be classified as Homo sapiens I. If present world migration patterns are determined by wealth and opportunity, in the chipped world emigrational flows will chase the chip producers and the medical specialists who execute the transplant. Cybernated communities will be the future points of light to which humanity will be drawn since prosperity will be a function of having overcome the ponderous time interval between information request and delivery.

Technology genius-guru Marshal McLuhan (1911-80) understood that all mechanical extensions of ourselves result in the physical atrophy of the body part that has been extended or replaced. With the invention of outer wear, body hair disappears; students raised on calculators are unable to perform the basic operations of multiplication. That being the case,  should we expect the human brain to atrophy as the chip takes over central command, especially if thinking, planning and judgment are chip-dependent? Or will the brain, through its intimate (quasi-conjugal) relationship with the chip enjoy an unprecedented increase in its capabilities?

However mistaken is Musk in his prediction that human intelligence will be able to leak its essence into a mechanical intelligence, he has opened up a necessary realm of inquiry that directly implicates the future of the species. For this alone, he deserves a place at the table at the highest levels of government and a full dispensation (carte blanche) from the scientific community. Dismissing him as a charlatan or sophist does incalculable disservice to his deep reservoir of thought-provoking ideas and the conversations they arouse.  Musk is a visionary, and while vision is always a hit and miss proposition, it is the sina qua non of invention and discovery, the bedrock upon which civilizations survive and thrive.