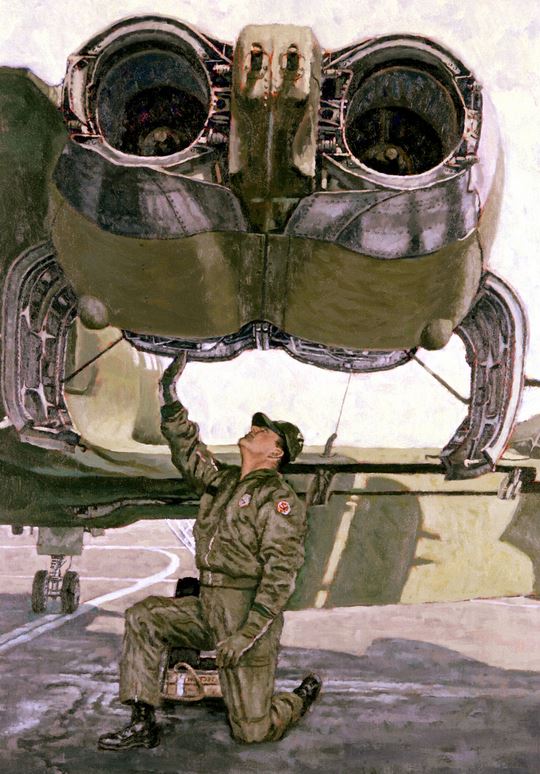 Air Force Lieutenant Colonel Brian Brand opened opened a mail envelope walking from the mailbox at his home in San Bernardino, California. It was from the Department of the Air Force. He had entered the Army Air Corps in WWII and experienced the final operations flying air support in the Mariana Islands, Iwo Jima, and Okinawa. Brand was also part of the transition to the new Air Force designated military arm serving in Japan for four years of its US occupation. His current duty station was in southern California’s Norton Air Force base. He opened the envelope slowly and carefully while walking toward his wife Barbara, who was watering multicolored Zinnias in a window box of their white ranch style house.

“Oh, oh,” his wife Barbara stopped her gardening, “It must be bad news if you’re opening that mail before you get into the house.”

He stopped, “Not necessarily. It’s from the Air Force. Maybe it’s a lost check for hazardous duty pay.”

Brand read the flimsy sheet with his new orders. He didn’t smile. “I have to go to Washington. So far we don’t have to move.”

In the Air Force version of the Boeing 707, he found himself fantasizing about what he might be called to DC for. There were other passengers with varying expressions of concern, hope, but most were falling asleep.

At the DC Air Force airport, his 707 followed a dark blue pickup truck with a sign in its cargo space saying “FOLLOW ME”. An official Air Force car collected him and four others. The lettering on the car front doors declared “This vehicle for Pentagon use only.”

Brand showed his orders to an Air Force MP at a Pentagon entrance for “tactical offices.”

He was escorted to a room with an MP guard standing outside who motioned him to enter after further looking at his orders.

“Welcome, Col. Brand. From this point on, what is said here is Top Secret.” He paused, sipped some water, and continued in a somber tone, “I’m sure you remember your WW II participation from the invasion of Eniwetok atoll in 1944. Since the end of the War we’ve been using Eniwetok and a few of its other smaller tolls for studying nuclear explosions and assessing the nature of radioactive fallout as it decays over time.

“At this point let me introduce our physicist Dr. Boomquist from the AEC.”

Boomquist wriggled in his chair to sit up straight in his loose fitting suit. He succeeded only in looking skinnier and almost disappearing in the jacket like a turtle. He cleared his throat and tapped on a file folder before him, “Col. Brand, I head a committee whose only concern with A-bomb detonation is what happens to post-detonation fallout.” His squeaky voice further contributed to an image of a meek man of less stature than the uniformed attendees at the table.

General Clooper broke in, “You’ll also recall, Col. Brand, about the Army using troops dug in deep trenches in New Mexico and Nevada flatlands close to A-bomb explosions. That started in 1946 and has continued until today. We need one more test on Eniwetok to complete our data for residual radioactive analyses on men, machine, and atmosphere.” Clooper again motioned Boomquist to carry the conversation thread.

The cracked squeaky voice swallowed air and added, “Our proposed 1960 Eniwetok bomb will be designed to surgically excise a city like New York, Chicago, DC, or San Diego. We have data to suggest that such cities would be destroyed with along with its population. We also have results that show the land would still be too hot for any use up to three years later. What we need now is final testing to find out how long lethal radiation would linger and spread in the air above it and the waters abutting such cities.”

Clooper again took charge, “We need you and your squadrons to fly multiple sorties through such atmosphere and dust clouds collecting air specimens for analysis. You and your men will be in proper gamma ray protective clothing.” The General sat back and pointed at Brand with a retractible black ballpoint pen, “Ordinarily, as the Army has done, we would use paid volunteer soldiers for this, but we can’t wait to amass the proper number of volunteer troops to flesh out the mission. Your next orders, Col. Brand, will be to command this important force.”

Brand could feel his temples pounding with an accelerating pulse as his blood pressure rose. “Sir, I would need to see the data the professor here mentions. I need to especially consider what has happened to the Army’s troops after they’re being exposed to a radioactive environment. I need to know how effective their radiation protection was.”

Clooper turned red-faced, “Lt. Colonel Brand this will mean a promotion to full Colonel. And, as I stressed, these are direct orders from the AEC, the Air Force, and the Department of Defense.”

Unfazed by Clooper’s remarks, Brand stood up, “Unless I, as commander of these planes and men, see the cumulative knowledge of previous years of testing, I cannot accept this assignment, sir.”

A second meeting was organized three days later. General Clooper was required by military regulations to honor Brand’s request. The General met initial resistance led by two other military scientists who were part of Boomquist’s radiation experts committee. Boomquist spoke with anger and refused to honor Brand’s demand for the US troop atomic energy exposure data from the 1946 through 1958 Eniwetok and other atoll detonations. He stood up at the special meeting of the same attendees. “We need the final data from this proposed last test at Eniwetok.”

General Clooper was allied with Col. Brand in putting the safety of his men before that of machine, air, and water. “You will present the results from the combined radiation exposure in New Mexico, Nevada, and the Pacific sites that we have given to you Col Brand. I’ve asked this group to hear the Colonel present the data and listen to his conclusions.”

Brand stood up and motioned the slide projectionist to begin. “You can see the demography according to military branch represented at testing sites over a 14-year period. Initially in the 1940’s, gamma radiation was most toxic to those dug in nearest to ground zero of device detonation.” Brand used a long bamboo pointer at each slide projected. “Although, I feel the data speak for itself, I have, by permission of the Department of Defense, brought a Federally-appointed radiation authority who will speak from the summary of evidence as to why we are actually here, and why we do not have to mandate human exposure for this last proposed detonation at Eniwetok. Before I start with the data let me introduce Dr. Mordecai Krechenbaum from MIT in Boston with this slide of his credentials including his top secret clearance and affirmation by the President.”

Long-haired Professor Krechenbaum stood up. He brushed imaginary lint from his well-worn black serge vested suit as Brand read his bio-material on the screen. The Professor stood tall and official while he adjusted his black-rimmed glasses. After scanning the panel he turned to Brand, nodded recognition and sat down.

There were affirmative gestures by the attendees and Brand continued, “As you can see, there were several delayed radiation deaths from those nearest ground zero. Radiation falls off with the square of the distance from the center of the explosion. Many of the troops had signs of sickness from bone marrow suppression, bleeding disorders, severe skin burns, and systemic cancers as longs as seven years after their missions. We have that data already. You are looking at it. What the scientists are asking of me today, is for a smaller capacity bomb for one last above-ground testing. It’s an A-bomb designed to destroy people and property in cities with over a million Inhabitants and with New York City it would be over eight million people.”

Krechenbaum took the pointer. “Gentlemen of the military and AEC consultants, the problem is thus presented.” He looked at each table member and back at Brand. His hollow, penetrating voice seemed to surround each one like a force field of invisible energy. “First let me answer the ‘why’ of even having this ‘last Eniwetok test.” He sipped from his water glass. “Conclusions from American atomic bomb detonations have indicated that nuclear weapons, and they were all triggered above land or sea targets, must be stopped. What you see before you is a problem to human life. We, and other nuclear powers, ask that all future atomic device detonations be done under ground. Such a solution to our problem as presented by Col. Brand will sequester gamma rays beneath the Earth’s surface. We will then analyze the power and consequences of these contaminated sites. No human exposure is needed.”

General Clooper nodded to Brand to continue. “It appears, gentlemen that we have a solution to further testing after this last Eniwetok one. The problem that remains is not to send the Air Force squadrons into harm’s way. The Pentagon has offered a solution, to which I and others have agreed upon. The others I refer to are doctors specialized in radioactivity and its effects on humanity, which I have just showed. I say again neither myself nor any other military Air Force Commander should fly their men through radioactive air, dust clouds, or near any recent above ground detonation.”

Another man in a dark suit was allowed entrance. He was from the White House, and read a directive approved by the Secretary of Defense and endorsed by the President. It concluded, “This revision to the Eniwetok Mission is final. It will be enacted 100%. It will not be necessary or allowed to have live military or civilian personal to be exposed to radioactivity.”

General Clooper stood for the final item on the agenda. “Col. Brand is to be commended for standing up for what could have been  a disastrous period in military ordnance atomic testing. However, by refusing to obey a direct order, he has opened his career to severe censoring.” Clooper looked at the serious faces. “Our last item for discussion is to either suggest sanctions to Col. Brand or recognize his courage to show us all a problem and help come up with a solution.”

Brand returned home to San Bernardino. His wife greeted him with a hug and anxious eyes. “Well, dear, are we going to move again? What were your final orders?”

He opened a recent newspaper and handed it to her. “Look at the front page and pictures of the old B-17 bombers and read the first sentence above the byline.”

Puzzled, she complied, “Last above-ground A-Bomb dropped by drone-piloted B-17s on Eniwetok Atoll.” She looked up, “What does this have to do with you … or us?”

“I can’t tell you anything other than what you read on this publication. I had to sign a complete confidential secrecy document never to relate to why I had to go to DC. Perhaps it’ll go public when it gets declassified, if ever.” He waited Barbara to finish and gave her a hug and a kiss.

She noticed the new silver eagles on his uniform shoulders. “Oh my God! You got promoted.” She hugged him harder. “And we’re staying at Norton Air Force base. Wow, we can afford to get you one of those new riding lawn mowers now.”

PrevThree Poems
Bad Day at the Alphabet and other poemsNext