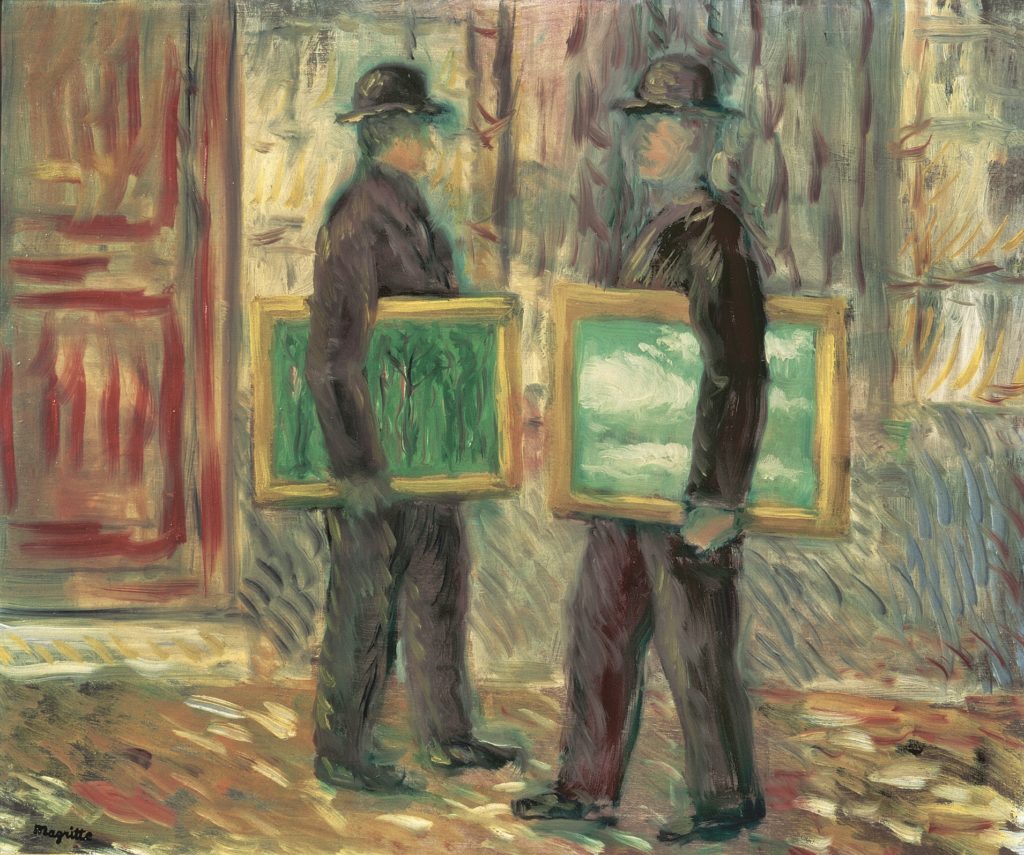 In the one-party state that is Fairfax County, VA, the party mimics the Ministry of Truth in George Orwell’s dystopian 1984. Like Stalin cropping liquidated comrades from group photos of his Bolshevik colleagues, officials in the increasingly oxymoronically-named Democratic Party seek to scrub the past and present.

As an adjunct American history instructor at Northern Virginia Community College, I used to take students on a Civil War walk through downtown Fairfax City. Within a few hundred feet were four war-related sites that made the past vivid. The stories behind them helped students connect with the fact that real human beings who once lived where they do now fought for and against this country.

No more. The Fairfax County board of supervisors, with a 9-1 Democrat majority, voted to dismantle the walk’s most significant stop. This was a stone obelisk, flanked by two Civil War-era howitzers pointing north, in front of the pre-war county courthouse, itself an historic site built in 1799. Until the war, enslaved people were auctioned under its small portico.

The monument marked the spot where Union and Confederate forces battled on June 1, 1861. The Washington Post reported last summer that State Sen. Chap Petersen (D), who grew up across the street, and colleagues in the Bull Run Civil War Round Table, stressed that the marker’s language was neutral. It did not glorify the Confederacy. In straight-forward wording it noted where organized forces from the two sides first fought on land and named the first man killed in action, Capt. John Marr of Virginia’s Warrenton Rifles.

A state judge ruled Petersen et. al. lacked standing to sue. Fairfax supervisors subsequently voted 9-1, lone Republican Pat Herrity dissenting, to donate the obelisk to a historical society in Centreville, miles from the skirmish ground. An adjacent marker would go to the State Department of Historic Resources. The artillery was to be redeployed at the Manassas National Battlefield Park.

Majority board members justified their historical erasure with progressive psycho-babble. Supervisor Dalia Palchik asserted that “this monument does not reflect the values of our richly diverse community.”

Colleague James Walkinshaw discerned that the memorial was erected in 1904 to intimidate former slaves and their descendants. He compared it to poll taxes and literacy tests. “People got together and said, ‘Let’s have one more hurdle’”—its impartial language notwithstanding.

Board Chairman Jeff McKay opined that “these were not subtle images. They were put there for a reason.”

Not subtle? Their nuance, if any, was undetectable. Whatever the reason for their installation in 1904, 116 years later the monument and marker served the purpose of historical instruction. Apparently, such aides to memory are implicitly racist and must be carted off.

What the supervisors, apparently adverse to any recollection of the Civil War, did to the past, the Fairfax County Public School board, all 12 technically non-partisan but Democratic Party-supported members mean to do to the present.

With nearly 186,000 students and a $3 billion annual budget, FCPS ranks as one of the country’s largest systems. And U.S. News and World Report again has rated its Thomas Jefferson High School for Science and Technology America’s top secondary institution.

TJ, as it is known locally, was founded in 1985 to be an elite institution, a magnet school attracting students in what today are called the STEM (science, technology, engineering and mathematics) subjects, and to help Fairfax County draw technology firms as employers. It worked. The school’s 1,800 pupils study in nano chemistry and quantum physics laboratories funded by Lockheed-Martin and Northrup-Grumman. From the student body come two-thirds of the entire state’s National Merit Scholarship semi-finalists.

Aspirants to the school have been required to pass a demanding entrance examination, write an essay, provide teacher recommendations, and pay a $100 applications fee. Perhaps no more.

Last summer, in what passed as a news report, The Washington Post declared that in the national “seismic reckoning over racism” sparked by the George Floyd killing, TJ’s student demographics and admissions policy had come under scrutiny. The institution, “like other magnet schools, has long been notorious for failing to admit black and Latino students.” Investigation would span “the notoriously exclusive application process to the culture [allegedly dismissive of blacks and Hispanics] that pervades the school’s hallways.”

Racism, notorious, failing. Just in case readers didn’t get the message, The Post ran an editorial under the headline “A Virginia school shows that racial inequities aren’t confined to the justice system.”

Like Georgetown University, another Washington, D.C.-area instructional institution, albeit a private one, TJ admits only 17.5 percent of applicants; there must be many disappointed hopefuls of all ethnic-racial backgrounds.

Nevertheless, like The Post, FCPS board members find TJ’s statistical disparities intolerable. Mistaking data for facts (my temperature is elevated; therefore, I must have Covid-19), they superficially equate disparity with inequity and conclude that racism, if not overt then covert or at least implicit, must be at work. To produce more demographically if not necessarily academically representative ethnic-racial results, TJ must get “woke.”

Asra Q. Nomani, a former Wall Street Journal reporter and parent of a Thomas Jefferson student, asserts it’s not that TJ discriminates against people of color but rather that it admits too many of “the wrong kind of people of color.” According to Nomani, “hundreds of TJ parents and students are immigrants from as far as China and Romania.” They’ve often fled “the harshest of tyranny and communism’s radical equality.”

But parents like her find little empathy from school Principal Ann Bonitatibus. Communicating with TJ parents, she confessed that “we do not reflect the racial composition in FCPS.” The most recent admissions cycle “has not closed the equity gap.”

Two and a-half generations after the Civil Rights Act of 1964 and Voting Rights Act of 1965, after an estimated $23 trillion spent in the War on Poverty launched by President Lyndon Johnson to benefit poor whites and blacks, most institutions, professions, crafts, arts and other human endeavors in this country of 330 million diverse people likely have not closed “the equity gap.” So, “systemic racism” must be the cause?

According to Nomani, Bonitatibus advised the mostly immigrant parents of color objecting to diluting or eliminating TJ’s restrictive admissions process to check their “privilege.” Last month, Bonitatibus presented students with an “equity reflection” survey. Nomani sees that as another example of critical race theory indoctrination by FCPS officials.

Critics say Asian parents buy homes in middle school districts with better records of sending pupils to TJ and spend thousands of dollars on preparation courses. Opponents of less or non-selective admissions say the ultimate effect would be to discriminate against Asian students in favor of whites. They maintain that efforts to improve admission prospects for blacks and Hispanics must start long before high school.

TJ alum and parent of a current student, Jorge Antonio Torrio, who favored an admissions lottery, declared “we believe that everyone has a right to be here. It’s a public school funded by the general public. It reminds me of something that is really taxation without representation.”

Countered Suparna Dutta, daughter of an Indian immigrant and mother of a TJ student, “it’s demoralizing, that all the values of hard work and merit that I believed defined America are being turned upside down.”

TJ is one of Virginia’s 19 Governor’s Schools. The program was launched in 1973 by then-Gov. A. Linwood Holton to, in the words of the Commonwealth’s Department of Education, “serve gifted high school students . . . with acceleration and exploration in areas ranging from the arts, to government and international studies, and to mathematics, science, and technology.” Holton was Virginia’s first Republican chief executive in the 20th century.

Erasing neutral monuments to historic Civil War events; attacking selective admissions processes necessary for successful schools with specialized educational missions— What really drives Fairfax County’s ruling Democrats? Economist John Maynard Keynes famously observed that “practical men who believe themselves to be quite exempt from any intellectual influence, are usually the slaves of some defunct economist. Madmen in authority, who hear voices in the air, are distilling their frenzy from some academic scribbler of a few years back.”

That sounds about right. Fairfax’s woke officials, most of whom campaigned as “progressives,” are, consciously or not, activist participants in the 230-year struggle between descendants of the French Revolution and children of the American Revolution.

The original French revolutionaries demanded liberté, eqalité and fraternité, but prized equality and brotherhood—the former leveled down if necessary and the latter enforced as required—above individual freedom. For critical race theory bean counters, that means returning the United States to a land in which opportunity is allocated statistically according to racial classifications.

American rebels against Great Britain, on the other hand, demanded life, liberty and the pursuit of happiness. They believed individual opportunity accorded with natural law and would lead to the greater public good.

The Washington, D.C. suburb of Fairfax reflects the U.N. General Assembly in its ethnic-racial and native-born/immigrant diversity. Yet with its nearness to the federal spigot it ranks as second-wealthiest county in the United States with a median annual family income of $112,436.

The county’s long political slide from purple to cobalt has left it in charge of Democrats who can afford to favor idealized equality over actual freedom. Parents suing the school board hope to be more than a speed bump blocking the party’s relentless push to control past, present and future.

Eric Rozenman, a long-ago Democrat, is a Fairfax County resident.

PrevAll We Have is the Future and Each Other
Will Small Business Inherit the Wind?Next