Faust in History and Legend 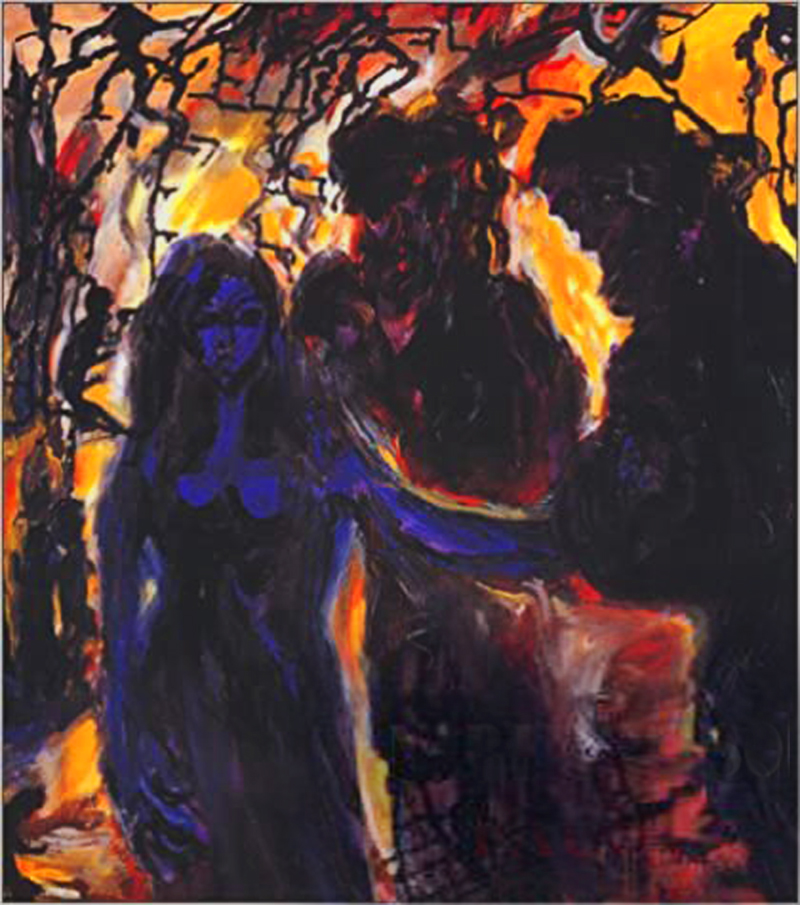 The legend of Faust and his pact with the Devil arose in Germany in the 16th. century, soon after the Reformation began.[*] It challenged the Lutheran and Calvinist doctrine of pre-destination—that you are bound for either heaven or hell from the moment you begin existing or even before, regardless of whether you do good or evil in the course of your life. You have no choice.

The legendary Faust is a man who chooses. He chooses evil; chooses to sell his soul to the Devil (who bears the name Mephistopheles in almost all the Faust narratives) in exchange for power, honor, wealth, fame; delight of the senses and satisfaction of the appetites, especially lust; and knowledge (of both the scientific and the intuitive sorts), for the duration of his life on earth, usually twenty-four years from the day of the compact. As his splendid life goes on, he wonders at moments if he could repent and be saved. He is exhorted by well-wishers to turn to God for mercy. But he chooses to renew his fatal pact. When he dies he goes to hell because of his choice. So it could not have been an ideal cautionary tale for most Protestants. Nevertheless it became lastingly popular in the Protestant countries of northern Europe in books and plays (and eventually everywhere in all forms including operas and films).

The seed of the legend lay in the life, character, skills and escapades of a real historical Dr Faust (1480-1540), “magician, necromancer, sodomist, astrologer and palm reader,” born Georgius Sabellicus in Knittlingen, Württemberg. In 1505 he was helped by a certain Franz von Sickengen, who interested himself in mysticism and the magic arts, to obtain the post of schoolmaster in the Rhineland-Palatinate town of Kreuznach. Exposed as having forced boys of his classroom to perform “acts of lewdness,” Sabellicus disappeared from the school and the town. Two years later, as “Johannes Faust,” he was granted the degree of Bachelor of Arts in Theology by the University of Heidelberg. He came top of his class of fifteen, so either he was a brainy fellow or he had already sold his soul to the Devil.

The graduate called himself “the Second Magus,” signaling that he was the successor to Simon Magus, the 1st century Gnostic teacher of St Paul’s day, who was written about scornfully in the New Testament and condemned by the Catholic Church as “the father of all heresies”.

Dr. Johannes Faust stayed in Heidelberg for some years and acquired a dubious reputation as a man of extraordinary powers. While most commentary on him both in his lifetime and for a few years after his death portrayed him as no more than a braggart, a fraud, and a petty thief, some contemporaries took him more seriously. Martin Luther and Melanchthon considered his powers to be considerable—and diabolical. From the year 1513, documents record anecdotes of “Georg Faust,” “Georgius Faust,” and “Dr. Faust.” A church canon in Gotha refers to him as “the demigod of Heidelberg.” In 1520 a bishop wrote that he had his horoscope cast by “Dr. Faust.” In 1528 a Bavarian prior wrote that a “Georgius Faust” claimed to be “Commander and Preceptor of the Knights of St. John.” A Dr. Georg Faust was banished in the same year from Ingolstadt in Bavaria, for “posing as a soothsaye.r. The city if Nürnberg (Nuremberg), also in Bavaria, refused a safe conduct to “Dr. Faust the great sodomite and necromancer” in 1532. According to the Waldeck Chronicle, “Dr. Faust the famous necromancer” prophesied that the city of Münster, where the Anabaptists led by John of Leyden were under siege by the forces of the Bishop of Bavaria, would fall on June 25, 1535—which it did.

His legend evolved in his lifetime and grew after his death. An agreement made between himself and the Devil became early on an essential ingredient of it. Lutheran clergy spread the tale. In tones of thrilled horror they claimed that he referred to Satan as his “Schwäger,” his brother-in-law. They said that his death was brought about by the Devil strangling him: the Devil “took his life” and “took his soul.”

A demon spirit who takes the form of Helen of Troy occurs in almost all versions of the story. (She had been Simon Magus’s consort. Simon had found her in a brothel in Tyre, and preached that she had been “Helen the most beautiful woman in the world” in a former life, and had descended again from the highest heaven to help him with his mission of redeeming mankind.)

By the middle of the 16th century, many stories attached to the name and figure of Faust were collected in a number of manuscripts. One of these was published in 1587 by Johan Spies of Frankfurt. It was printed and became a “best seller” —perhaps the first secular book that could be so called. It was translated into English, very freely, the translator subtracting parts and adding anecdotes of his own invention. This translation was Christopher Marlowe’s source for his play The Tragical History of the Life and Death of Doctor Faustus, first performed in 1593. It was the best and most famous of the Faust plays, often tinkered with to suit the taste of different players and impresarios. It was taken to Germany in the early years of the 17th. century by English tour companies, where it re-aroused popular interest in the Faust story. In the 18th century German taste turned against whatever the play had by then become. It was considered vulgar and obscene. But Faust was kept in the public eye by puppet plays, the best known of them the anti-Jewish Ulm Puppet Play, and they became as popular as Punch and Judy became in the British Isles and colonies.

In 1808, Germany’s greatest writer, Johann Wolfgang von Goethe, published his play Faust, Part One. (He finished writing the second part of the enormous work, Faust, Part Two in 1831, and it was published only after his death in the following year.) Goethe’s Dr. Faust is an archetype of the Romantic Age. Fed up with the dry cerebral occupation of academic study, he makes his diabolical bargain so that he can explore “the heights and the depths” of human experience. He wants to live to the full by indulging his emotions and his appetites. The conflict between good and evil rages within him: he has, he says, two souls in his breast, each longing to be free of the other. Unlike earlier fictional Fausts such as Christopher Marlowe’s who sin by merely playing lewd and silly tricks, Goethe’s does a truly evil thing: he gratifies his lust by seducing an innocent girl and then drives her to despair, crime and execution. But his story, though intended to arouse revulsion, pity and terror, fails to condemn the choice he makes when he signs his pact with the Devil. In fact, Goethe destroys the message of the legend, which is that a bargain made with the Devil dooms you to hell. That is what the story of Faust is all about, just as the story of Oedipus is about a man who kills his father, marries his mother, and blinds himself in remorse. If any of those events don’t happen, the story falls apart and the point is lost. Goethe’s Faust does not go to hell. He repents, and so is saved by God. It is not, after all, the Faust myth but a story of divine mercy—more Catholic than Protestant since it allows Faust to help save himself by repentance and good works.

Johann Wolfgang Goethe was not a Catholic. He was raised a Lutheran but distanced himself from the Lutheran Church and would not even call himself a Christian. He was, he said, a Hypsistarian, a believer in a divine being, the “Most High.” The God in his play, however, is the Old Testament God, and his story of Faust is conflated with the biblical story of Job. Satan can try to gain the soul of Faust, as of Job, only with God’s permission; which means that God retains the ultimate power over Faust’s destiny, whatever the Devil does, and even if Faust succumbs to evil temptation. By having Faust repent his sin and God then save the sinner from hell, Goethe expressed humane optimism, hope for all humankind.

But in the twentieth century another great German writer, Thomas Mann, told the story again in his novel Dr. Faustus. In his version the demonic pact is made by a German composer and the German nation, and there is no forgiveness, no redemption for either the person or the people. That story will be the subject of another essay.

[*] The Reformation is conventionally dated as starting on October 31, 1517, when Martin Luther defied the power of the Pope by nailing his 95 theses against the sale of Indulgences to the door of the Castle Church in Wittenberg.

PrevUkraine: Escalation is Inevitable
Epitaphs of the Vietnam War: A Dead Statesman’s Angry and Deluded SonNext