Gain of Function: From Sticks and Stones to Viral Pandemics 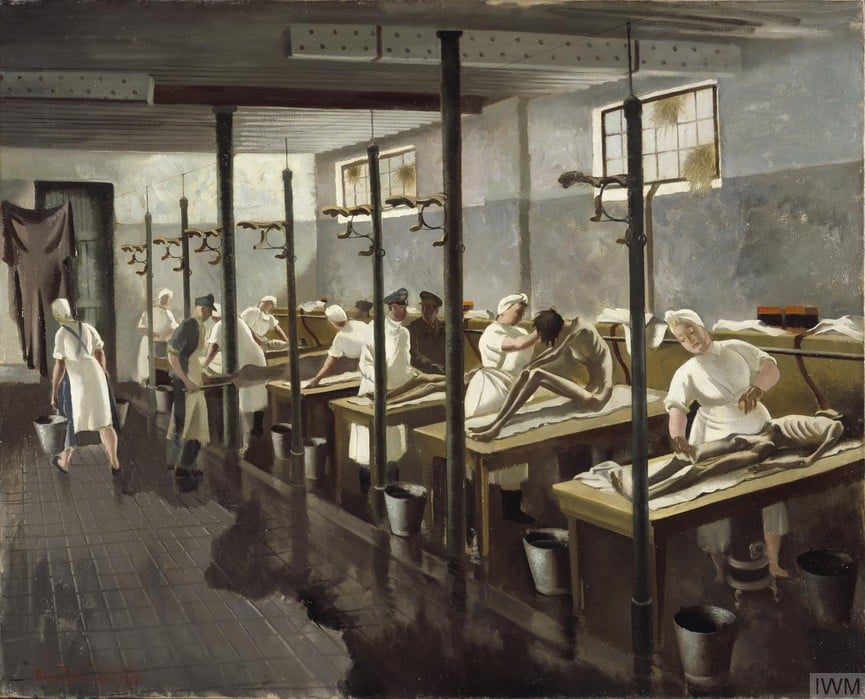 There has been something disconcerting about watching the blank demeanor by Dr. Anthony Fauci expressed through the 2020-21 coronavirus pandemic that prompted a revelatory comparison of this attitude by other doctors in the past who have described their work in clinically dry terms and with cool nerves—the effects of medical experimentation and consequence. But, before we get to Nazis, I must digress . . .

The recent phrase being touted in the news, ‘gain of function’ —GOF, is specific to the increase of pathogen transmissibility or virulence. According to Michael J. Selgelild, “The benefits of this type of research are to “better inform public health and preparedness efforts and/or development of medical countermeasures.” This type of research has ethical boundaries. It is termed ‘dual use’ as it can be made to work for good or malevolent reasons. While the positive effects of GOF have been demonstrated in previous studies in the United States and abroad, the question of biosafety in laboratories and the possibility of escaping pathogens must be weighed to gauge the benefits vs. risks.

I have not been able to find any use of GOF other than in the medical literature. But let us examine a few analogies. Consider the utility of a knife that is then affixed to a stick to make a spear. The knife and spear can kill animals for food or be used for mortal combat. The spear is adjusted to make an arrowhead that is shot from a bow—the use is dual. A stone can be thrown by hand to kill. It can be accelerated by a sling. It can be made more accurate by a sling shot mechanism. It can be enlarged to hurl rocks on a catapult and destroy not only flesh but stone defenses.

In 904 AD, the Chinese developed a black powder intended for medicinal purposes. Its dual use is the earliest known chemical explosive, gunpowder. Such discoveries of dual use extend to many industrial processes and products. By the 1200s the use of gunpowder in weapons extended from Asia into Europe. Gunpowder for pistols expanded to larger projectiles in cannons. The invention of other propellants or combinations led to high power destructive war machines that have ravaged the world for centuries.

A single shot pistol has limitations. If the shot or bullet has it’s own propellant, then it could be multiplied in a cartridge and mechanisms invented for quickly delivered rounds. Pistols and rifles can kill game for survival or humans in war or defense/offense.

The atom was split on December 17, 1938 in the laboratory of Otto Hahn in Germany. The process was observed to release an enormous amount of energy. The discovery was hailed for its potential use as a most efficient and low-cost source of power. Controlled, it could be used in plants for electrical production. Its dual use of course is in nuclear warfare with the added conundrum of deadly residual radiation.

During the second World War, the Nazis mounted medical experiments on their captors in order to “help German military personnel in combat situations, develop new weapons, aid in the recovery of military personnel who had been injured, and to advance the Nazi racial ideology and eugenics.” —’Nazi Medical Experimentation,’ US Holocaust Memorial Museum

I believe you could affix the term ‘gain of function’ to these inhumane acts.

Having been raised in a foreign country and being quite young during the civil rights movements, the arms race and danger of nuclear proliferation, assassinations, etc. during the 60s, I did not see the many documentary films and photos that must have circulated at the time in the United States and Europe at least of these momentous developments or those delineating the world wars.

I started viewing such documentary evidence on weekends watching PBS episodes during the late 70s. The black and white footage from German/Nazi photographers and films especially was startling, the propaganda compelling, the overall effect sick and nauseating when the reality of the evil became clear. After researching further, and then following my reading of Hitler’s architect Albert Speer’s Inside the Third Reich —and viewing several Hollywood renditions of this horrific period of human suffering, I remarked to myself how indifferently the malevolent Nazi hierarchy and their chief doctors described and annotated their torturous medical experiments.

They no doubt knew that their medical procedures were completely unethical by any standard, were enacted without the patients’ wishes or interests, that they were inhumane in their treatment of their subjects, that they could not possibly be exonerated using the argument that the means would justify the ends, but they proceeded, nonetheless in their ghastly experimentation. Their overriding concern was most likely to preserve German racial heritage through the application of eugenics—and they had captive unwilling and unknowing subjects (many of whom were children) on which to practice.

By the 1930’s Germany’s second leading cause of death was cancer. In light of this alarming statistic the Nazis wished to rid themselves of this ‘impurity’ and enlisted a prominent Jewish doctor—Otto Warburg, at one time financed by the Rockefeller Foundation—to concentrate his research entirely on developing a cure in exchange for leaving him and his family free from Nazi brutality.

Hitler’s mother, according to a recent report by CBS, died of breast cancer and he was personally wary after a removal of a polyp in his larynx. (see details of Warburg’s life here.)

Warburg advanced the study of cancer and did receive a Nobel Prize for his metabolic studies. However, his research and methods were not deemed unethical.

Now, we have seen the results of a lab experiment gone terribly awry. This compares somewhat to a purposeful or accidental release of nuclear power (Hiroshima/Chernobyl). For years we feared only ‘the bomb.’ Now we must concern ourselves with medical malpractice on an immense tragic scale. The question is what is the risk/reward; is it ever ethical to take such a risk in the hopes of finding cures or methods to block a virus gone out of control when the deadly unchecked experimental results are released wittingly or not?

My memory goes back to the countless press conferences starting in early 2020 which seemed scrubbed clean of the inevitability of wide disaster. Day after day though the statistics became untenable. Yet the tone of the reports did not reach a din until the estimated 40-80,000 anticipated deaths projected early by the Trump administration for the United States escalated to the hundreds of thousands. During all this, one man told us in a disconnected manner that masks did not matter, then they did. That we had to keep a 6-foot distance and wash our hands. Which was basically it. In hindsight and sometime during the middle of this crisis the preventative measures seemed like an extremely poor administration of medical expertise. We could only wait for a vaccine to rid us of this deadly virus. Is this the only remedy modern medicine could offer up before a vaccine could be developed? Well, yes, there were remedies but the left discounted many.

This singular spokesperson, Anthony Fauci, an infectious disease specialist, appointed head of NIAID in 1984, was found to be directly involved in directing funds from the United States to the communist Chinese laboratory in Wuhan to undergo this type of medical research.

The underlying aim apparently was to benefit from gain of function research. His blood-drained demeanor during the entire pandemic is now understandable. He believed in a clinically positive outcome for this ethically questionable research. He did not mention his involvement until recently extrapolated emails and records obtained through a Freedom of Information Act make it clear that he was a key figure in making the research possible. Under his direction, The National Institute of Allergy and Infectious Diseases awarded the Wuhan laboratory over $826,277 between 2014 and 2019. Fauci feared all along that he might be implicated. And so he resolutely dismissed the notion that the coronavirus could have leaked from the Chinese lab. Although he denies this, a May 2020 interview with National Geographic has him scoffing at the suggestion the “scientists found the virus outside the lab, brought it back, and then it escaped.” He maintained that the virus “was in the wild to begin with. That’s why I don’t get what they’re talking about.”

The research was directed for “Understanding the Risk of Bat Coronavirus Emergence.” At the time it may have been deemed a noble pursuit. Dual Use Research Concern (DURC) oversight through committees has been mandated to mitigate the risk of ‘gain of function’ research. After all, any deadly virus developed for study could be used for biological warfare. And one can easily concoct a scenario where a country with nearly 1.5 billion can afford to lose hundreds of thousands or millions of their own population in order to cripple the rest of the world. Investigations must proceed to insure that this was not the case. But even if not, playing with deadly viruses should be as serious as the highest order of control for the proliferation of nuclear materials, whether by peaceful or unstable/ belligerent countries.

The question remains: is the study of deadly viruses beneficial if successful or more prone to accident resulting in a pandemic originally hoped to have been averted in the first place? It seems logical to pursue such research to ward off its effects if used as a bioweapon by a hostile country.  One conclusion must be that no adverse country which has the potential to weaponize such pathogens ever be allowed to receive funds from or collaborate with anyone. Period. If we must research how to defend ourselves from bioweapons, we should do it internally and not outsource it to anyone. And this is what Fauci’s group did. They outsourced the research to a hostile country. At the time the PC culture had permeated through our military/political/medical system and was seen as a peaceful gesture.

With so many who died day after day worldwide, and continue to do so, as a result from this catastrophic ‘accident’, there was little or no emotion shown from Fauci who plodded on with his dry reporting and weak and contradictory suggestions, realizing all along that his hand was in the making and release (accidental or purposeful) of the virus. This entire episode reminded me of the unscrupulous and fiendish doctors who worked for Hitler with absolutely no remorse or guilt.