Gino Bartali, Cyclist and ‘Righteous Among the Nations’ 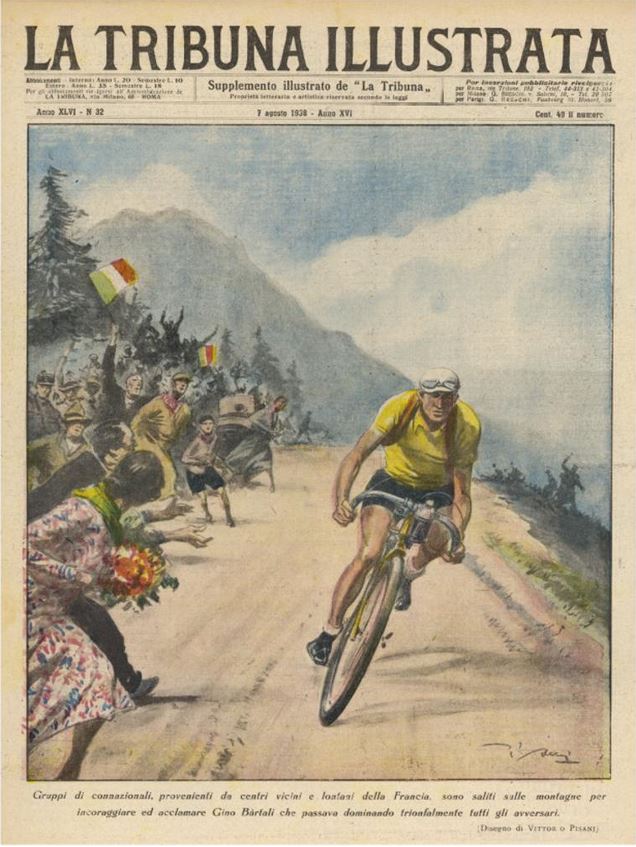 In September 2013, 13 years after his death, Gino Bartali was recognized as a “Righteous Among the Nations” by Yad Vashem for his efforts at the risk of his life to aid Jews during World War II. Born in Florence, Italy, the third son of four children of a smallholder farmer, Torello, Gino was the most renowned Italian cyclist before the Second World War, having won the Giro d’Italia in 1936, 1937, and 1946 and the Tour de France in 1938 and 1948. His physical appearance was that of a powerfully built boxer with a broad broken nose.

He began work in a bicycle shop when he was 13 and started racing as a promising amateur, turning professional in 1935 when he was 21. By the following year, he became Italian champion. Bartali came close to abandoning cycling. In 1936, he almost gave it up cycling as a result of his brother’s death in a racing accident. Bartali was persuaded to return and, in 1937, won the Giro d’Italia again. He was a crowd pleaser and critics claimed that this was the reason he did much better cycling before an Italian crowd.

Wounded by the remarks, Bartali was determined to participate in the 1938 grueling Tour de France run facing an unfriendly crowd. Italian fans feared that he might lose his temper as he had done on a previous occasion when he punched a hostile fan. He won the hardest segment of the race by a gap of more than five minutes. Radio commentator Georges Briquet commented of his reception at the finishing line amidst flag waving Italian fans, saying ….”These people had found a superman.” Outside Bartali’s hotel, an Italian general was shouting “Don’t touch him—he’s a god!” A public subscription was started in his name in Italy, and Benito Mussolini was among the contributors. In spite of pressure on all the Italian cyclists to win the event in order to enhance Mussolini’s pride, Bartali maintained he never succumbed to this paranoia—and his war record and deeply held devout Catholic faith bear this out. It was common knowledge that Mussolini expected the winner to assert that his victory was dedicated to “Il Duce.” Nevertheless, Bartali omitted any reference to Mussolini in his victory statement. 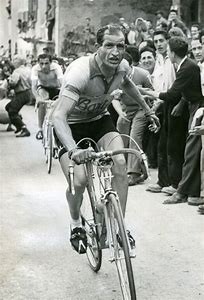 Bartali used his bicycle training as a cover for secret efforts to rescue Jews during the war. Drafted by the army, he was assigned the natural role as a special courier carrying important materials and information by bicycle, cycling through Tuscany, Umbria, and Marche from his native Florence to as far away as Assissi, demonstratively wearing his racing jersey emblazoned with his name across it. At all checkpoints he was universally hailed and recognized. Holocaust historian Martin Gilbert credits the Assisi Network, with saving 300 Jews from deportation and certain death. When the Nazis began to murder Jews, Monsignor Nicolini, Bishop of Assisi, ordered Father Aldo Brunacci to provide false transit papers and lead a rescue operation using shelters in 26 monasteries and convents. Thanks to their contacts in Florence, the great cyclist was contacted and volunteered his assistance.

None of the Fascist guards or Germans at these points dared to risk popular discontent by questioning Bartali, a national hero in their eyes. He was thus enabled to carry important information and materials to help the underground and Jews in need in the northern region of Italy known as the Italian Social Republic which remained loyal to Mussolini and the German forces after the legal Italian parliament and the King had surrendered to the Allies.

Not until December 2010 was it also revealed that Bartali had hidden an old Jewish friend, Giaccomo Goldenberg, together with Goldenberg’s family in his cellar. “He hid us in spite of knowing that the Germans were killing everybody who was hiding Jews,” Goldenberg’s son, Giorgio, says in a documentary film. Approximately 80% of Italian and refugee Jews living in Italy before World War Two survived, partly thanks to the efforts of Italian sympathizers.

Giorgio Nissim, a Jewish accountant from Pisa, worked for the Jewish community and refugees escape persecution. The network in Tuscany was discovered in autumn 1943 and all Jewish members except Nissim sent to concentration camps. His sons found out from his diary that Bartali had used his fame to help him  leave Florence in the morning, pretending to train for a boxing match , ride to Assisi where many Jews were hiding in Franciscan convents, collect their photographs and ride back to Nissim. Bartali also used his position to learn about raids on safehouses. Although arrested and questioned by Nazi intelligence agents putting his life in danger, Bartali did not reveal what he had done. Even after the war he never boasted of his activities

Bartali continued working with the Assisi Network.  In 1943, he led Jewish refugees towards the Swiss Alps himself. He cycled, pulling a wagon with a secret compartment, telling patrols it was just part of his training. In June 2012, a book about Bartali’s wartime activities, Road To Valor by Aili and Andres McConnon, was published. He is a central figure in the 2014 documentary film My Italian Secret: The Forgotten Heroes. In 2007, the script for a movie based on Bartali during World War II, called Lion Man of Tuscany was on the Black List, a survey of the “most liked un-produced scripts” in Hollywood

Who Could Have Guessed? The Diversity of Heroism

When Gino began his career as a professional racing cyclist, nothing could have predicted his behavior, willingness to jeopardize his career, and risk his life to rescue Jews including those who were total strangers and to defy the Fascist regime of his native country. Like the other Righteous Among the Nations who came from all walks of life and even in those countries that were temporarily allies of Nazi Germany, he had a moral compass he discovered on a path he had to follow and not according to any political ideology.

Many of us are aware of two outstanding examples of individual courage, daring and initiative demonstrated by Gentiles to save the lives of Jews in the Holocaust. They were the German industrialist Oskar Schindler and Swedish businessman and consul in Hungary, Raoul Wallenberg. Both have been the subject of films, memorial commemorations, and have had their likenesses portrayed on postage stamps, statues, and the honor of being celebrated at the Yad Vashem Institute in Israel. They became world famous whereas only older generation intense cycling enthusiasts may have ever heard of Gino Bartali. The only reward he, Wallenberg, Schindler and all the others received received was not of any material value, no money or any perks but only a  certificate and a plaque, often posthumously.

When Yad Vashem, the Shoah Martyrs’ and Heroes’ Remembrance Authority, was established in 1953 by the Knesset, one of its tasks was to commemorate the “Righteous among the Nations.” The Righteous were defined as non-Jews who risked their lives to save Jews during the Holocaust. Since 1963, a commission headed by a justice of the Supreme Court of Israel has been charged with the duty of awarding the honorary title “Righteous among the Nations.” Guided in its work by certain criteria, the commission meticulously studies all documentation including evidence by survivors and other eyewitnesses, evaluates the historical circumstances and the element of risk to the rescuer, and then decides if the case meets the criteria. Those criteria are:

Amazingly, more than 28,000 gentiles have been honored for meeting all of these demanding criteria.

Winners of the Recognition range in nationality from a single individual (a Japanese), to over 6,700 (Polish). It often shocks many American and British Jews to learn that among the persons so honored, they account for nationalities traditionally regarded as historically, among the most antisemitic such as Ukrainian 2,573, Lithuanian 891, Belorussian 641, Hungarian 844, and German 601, Compare these numbers with Italy 682 (a Fascist ally of Germany for part of the war ), and West European nations that fell under German occupation, namely the Netherlands 5,967  France, 3,995, Belgium 1,731 and by comparison, the figures for West European countries with long democratic traditions where Jews were not subject to harsh occupations and vindictive punishments were meagre;  Norway 57, Denmark 22, Sweden 10, or formally and initially neutral but sympathetic towards the Axis powers (Spain 9 and Portugal 3) or geographically far removed from German reach (Japan 1).

Before casting the first stone, we should appreciate the circumstances under which individuals had to make decisions resulting in consequences that were horrific if they did act versus the “downside” for failing to act—a moral judgement that they had to live with as a matter of their conscience but unknown to others.

PrevX Minus One
Nasty: Notes from a Protest and an Encounter with the Executive Director of the Cultural Center of Cape CodNext