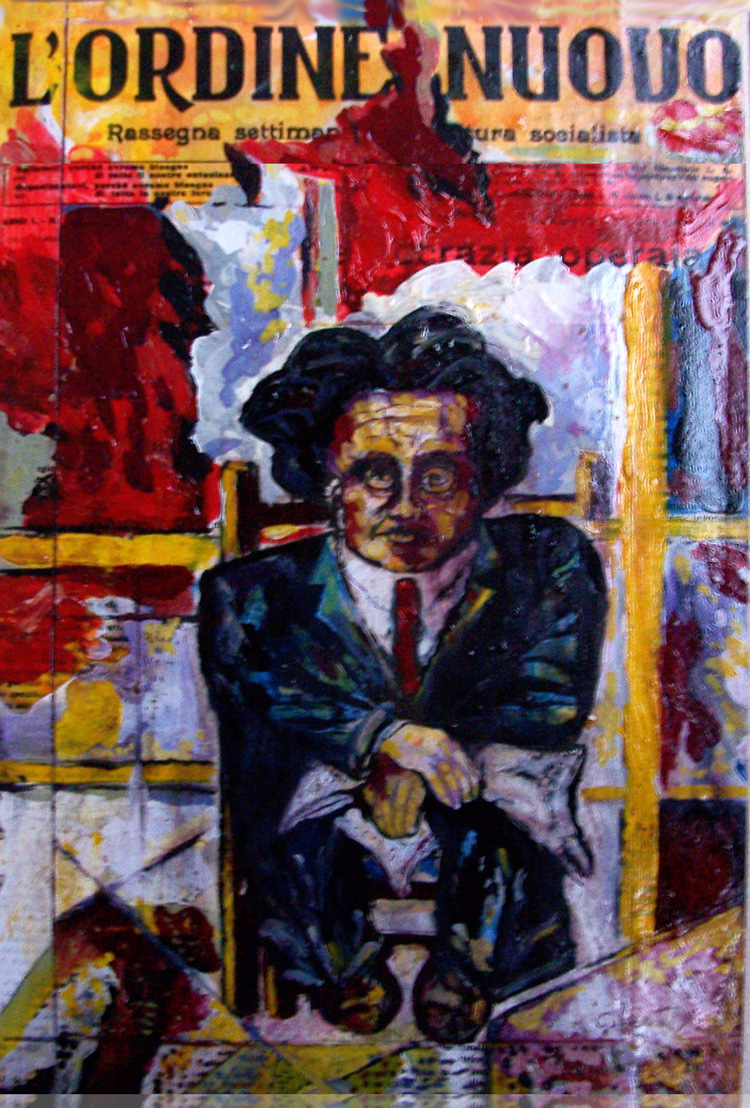 I was once changing buses in Poggibonsi, said to be the most Communist municipality in Tuscany, and noted a street sign: Largo Gramsci. They remember their hero, and so they should. Gramsci steered the Left away from romantic dreams of storming the Winter Palace or Bastille. The workers were not sufficiently enraged to fall for that, though Delacroix, ‘Liberty Leading the People,’ is still the inspiration for Parisians in gilets jaunes. Instead, Gramsci advocated the Long March through the Institutions.

Antonio Gramsci was a founder member of the Italian Communist Party, imprisoned by the Fascists, who spent years in prison before dying in 1937. He was easily the most imaginative of Marxist thinkers, and in his Prison Notebooks set out his theory of cultural hegemony. The State and ruling class use cultural institutions to maintain power in capitalist societies. Hegemonic culture uses ideology rather than coercion to propagate its own values and norms, so that they become the ‘common sense of all’. Cultural hegemony is produced by the dominant class through the institutions that form the superstructure of society. The ‘Long March through the Institutions’ is the slogan coined by the student activist Rudi Dutschke, derived from the writings of Gramsci, and made into a philosophy of entryism and social change from within. It is a strategy for establishing the conditions for revolution.

This doctrine has had enormous success, and is the cornerstone of the Left’s belief system and strategic action plan. Much of it is implemented through quangos, ‘quasi-autonomous non-governmental organizations.’ These supposedly ‘non-governmental’ entities have now taken over the work of governing the UK in all major spheres. They are all led by Gramsci’s ‘dominant class,’ the priviligentsia. Their members are generally well-born, if not hochgeboren. There are no exceptions. Government is sub-contracted to institutions which depend absolutely on the approval of central Government. And their elite leaders are liberal revolutionaries rewarded with all the honours of a democratic State, together with personal advancement.

The most notorious of these parastatal organizations is the National Trust. For many generations it was the benign guardian of houses, chattels and land. It was well loved and widely supported. But then its core business fell to the imperial overreach of high liberalism. The warning cones were hoisted when the Director-General of the National Trust, Dame Helen Ghosh, attempted to make it a citadel of Gay Pride. The late owner of a fine Norfolk House, who had been discreetly homosexual, was outed posthumously by Dame Helen who then ordered all workers on the estate to show support for the Gay cause. They were bidden to wear Gay Pride rainbow lanyards. Since the workers were volunteers, and of a traditional cast of mind, they revolted. The Director-General had form: as part of her progressive drive, Ickworth House in Suffolk had some fine Regency furniture replaced with beanbags. Dame Helen had to go, and found a retirement home as Master of Balliol College where she dwells in a fine listed building. Liberal herd immunity had looked after her in her sunset years. Lessons learned, one might have thought.

Not a bit of it. The liberal juggernaut did not slow. The Trust’s agenda moved on to its next programme of liberal evangelism, a review of all its properties whose owners had links to colonialism—naturally, Britain had colonies—and slavery. The mésalliance of colonialism and slavery led to some remarkable discoveries. Amongst those who had benefited from the proceeds of slavery were Gladstone, Darwin, Wordsworth. All were denounced, and their historic guilt proclaimed in plaques to be set on their dwellings. Yet it was perfectly normal in its time for investments in Africa, no questions asked, to be part of a portfolio. Joseph Conrad’s Heart of Darkness (1899) revealed the ruthless exploitation of the natives in the Belgian Congo, but even after that it was some time before the message percolated to the general public.

The National Trust took upon itself the duty of revising history to take account of its new obsessions. No figure of the past, however eminent, was spared. Churchill’s home, Chartwell, was listed for his past connections—if not with slavery, with colonialism—on the Trust’s codex. But then the Trust ran into fierce resistance based on two major factors. The first, as so often, was money. Many National Trust members resigned their membership, and they had an agreeable and convenient alternative: the National Trust For Scotland. This is an entirely separate organization whose members have reciprocal benefits with members of the Trust south of the border. So a Scotland member—who does not of course have to be Scottish–has free access to National Trust properties, and pays nothing when he visits them. And Covid has meant a dearth of visitors anyway. The Scotland Trust now flourishes, while the National Trust has acute financial problems. Many curators and experts have been laid off.

The second factor, even more important, is the public. The Trust’s policy of denouncing the British heritage, rather than caring for it, brought into being an equal and opposite resistance movement. A large, rapidly growing, and well-organized force, a group called Restore Trust, announced that they would be challenging the Trust’s leadership in the coming AGM. They aimed to depose the Chairman. The rebel group met with an immediate victory: within 24 hours of the announcement, the National Trust Chairman, Tim Parker, did not wait for the onslaught and resigned. That does not mean it is all over, for the Trust is controlled by the National Trust Council of 36, which has supported the Trust’s policies in the last two decades. They are likely to fight a rearguard action with and against the new Chairman, whom they will appoint. But this is a sign: events are on the move, and the era of easy victories for the Gramscians is coming to an end. Their techniques are now well understood, as are the methods for opposing them.

Some current instances. Oriel College has now confirmed that its statue of Cecil Rhodes will not be taken down. ‘Down with Rhodes’ was the mob cry for a while, and ‘Decolonizing’, that wonderfully vacuous policy, was advanced in the way of intellectual justification for plain vandalism. The college authorities have decided that this is the moment to strike, and it always looked odd when rioting students, some of whom had come out of Africa on a Rhodes scholarship, bit the hand that literally fed them. That was Oxford: Cambridge has just come through a parallel experience. Under Vice-Chancellor Stephen Toope, a Canadian, Cambridge became a home for politically correct activism. Academics and students would be forced to sign up to a new charter of values, which included the demand that they ‘respect’ all views. A collection of rebel dons then forced that word to be replaced by ‘tolerance’. Toope came back with the publication of a new list of potential offences that academics and students could use as the basis to report anonymously on each other. These included ‘micro-aggressions’—so micro that the naked eye could barely detect them, such as ‘not giving eye contact’ or raising an eyebrow when a black is speaking. The absurdity of these offences needs no exegesis, especially in a university where people are as good as Roger Moore in making the eyebrow do the work of comment.

And now the rebels pose a serious threat to Cambridge’s finances. Douglas Murray’s The Strange Death of Europe: Immigration, Identity, Islam (2017) lit a fuse that glows in spite of the efforts of The Guardian and The Financial Times to extinguish it. He is sérieux, and has now written an article in the hospitable pages of The Sunday Telegraph (23 May) ‘WITHHOLD YOUR DONATIONS TO WOKE CAMBRIDGE.’ This is a killer blow. The final paragraph of Murray’s article begins ‘All donations to Cambridge should be withheld all long as this menace of a man is in place,’ and there must be every chance that Toope’s reign will soon be over.

The alliance between Gramsci and the liberal elite is the key to State policy. Gramsci has sired many offspring, all of them dedicated to a progressivist status quo. The full extent of his care for them is only now becoming fully apparent. The Daily Telegraph has revealed that 278 charities, satirically termed ‘not for profit’ organizations, pay their leaders more than the Prime Minister. The newspaper has discovered that the list of charities between them employ some 2,500 staff on salaries of over £100,000 a year. Charity begins at home for these lucky workers. The Charity Commission, which oversees their activities, has managed affairs with a light touch to date and is now obliged to endorse the findings of the Telegraph report. The chief executive of the Charity Commission says that organizations need to justify their pay to the public, and greater transparency is called for. Fine, but not until the newspaper had aired the facts did the Commission call for that loaded word, ‘transparency.’ The explosive nature of the Telegraph revelations recalls that newspaper’s great scoop of May 2009, when they paid handsomely for a single disc with full details of Parliamentary expense claims. These had hitherto been a closely guarded secret, and the nation was diverted with weeks of what its leaders had been up to. First prize, by general indeed global assent, went to Douglas Hogg, M.P. who applied for the maintenance costs of his moat. He is now Lord Hogg.

The long march through the institutions has left a class of fat cats, hitherto protected by the Charity Commission and now exposed to keener winds. Full disclosure of executive salaries is called for. Gramsci has had many successes, but has now run into aroused and organized resistance. More is to come.

PrevThree Poems
The Treasure that is Literature: Re-Reading for Self-DiscoveryNext