How Does Time Look? 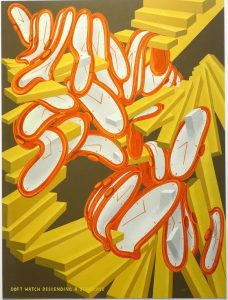 In the past, I read several pieces on philosophy and mathematics on these pages, and I hope I’d be forgiven for thinking that an attempt at clarifying one aspect of the philosophy of physics – the puzzle of the nature of time, would not be out of place.

To state the obvious, to exist is to have durability; hence, what we call “time” exists only because matter exists. Without existence of objects, there is no time. Since time is a function of object’s existence, and since object’s existence is determined by object’s materiality, time is essentially a derivation of matter.

Because space is traversable, we have no difficulty picturing it. Visualizing time, on the other hand, is tricky. It is usually depicted as a straight line moving from the area of the past though the point of the present towards the future – the drawing being accompanied by a verbal caveat that this picture is, in physical terms, inaccurate since the actual physical existence is localized in the present. The “past” is outside the zone of physical activity, being merely an image in human memory, while what is called “future” is a hypothetical mental extrapolation of the so-far accumulated experience. Insofar as they exist in human mind, the “past” and the “future” exist in the present – because, like everything else, the thought process that generates them can only exist in the present.

Given that the “past” and the “future” are mental rather than physical constructs, the continuous line on a whiteboard cannot possibly make sense. To adequately represent time by graphic means, the depiction of the past should be eliminated, and the future should not be mentioned at all. Time should be a moving point of the “present.”

But this is not all. Being an existential coordinate of an object, time is really a measure of that object’s change: absent change, time stops (visualization of time for a body at complete rest, experiencing no change whatsoever, should consist of a stationary dot: for such body, time stands still).

Therefore, the way time is depicted should vary depending on the kind of change that happens to the object that engenders time. Since change can be gradual, or abrupt – a “quantum change” the time that results from an object’s behavior can be, correspondingly, either continuous or quantum.

A basic example of the continuous type of change is inertial movement. The best way to depict the time associated with it, would be to attach the erasing sponge to the marker, and to drag that contraption on the whiteboard: the dot of the “present” would be moving forward at an even speed, while the “past” would as evenly disappear. Because the sponge is rigidly attached to the marker, the contiguous time can be depicted using just one hand, so I’ll call it a “one-hand visualization” of time.

An abrupt, quantum change of an object’s configuration requires a totally different method of drawing time: to illustrate the abruptness of the transition from one state of the object to another, one should hold the marker in one hand and the sponge in the other, the hand with the marker putting a dot that signifies the new configuration of the object while the hand with the sponge simultaneously erasing the previous dot that stood for the object’s prior configuration. This, “two-hand visualization” of quantum time is discrete rather than contiguous.

Since both kinds of changes happen to an object, the two methods of depicting time complement each other. Consider a gold nugget washed by a lucky prospector somewhere in California. While it was hid underground, it was at rest, its time at a standstill – as visualized by a stationary point. Upon its discovery, its time starts moving. Firstly, the nugget is transported to a jewelry shop – the change described by “one-hand visualization;” being melted into an ingot is a quantum event both for the nugget as a whole, and for its constituent atoms, to be described by “two-hand visualization.” And finally, its existence as a unit comes to an end as it gets cut and hammered into individual pieces of jewelry – a quantum event that terminates the ingot, and starts the existence of new objects, with their own associated time.

The same concept of time visualization holds for biological objects. Human biology features both the continuous, and the discrete features. One’s daily routine is described by the “one-hand visualization;” but the rhythmic quantum facet of human time – imperceptibly falling asleep, and as imperceptibly waking up can only be depicted by the “two-hand visualization.” (Of course, recording the quantum leap of falling asleep is impossible – a sleeping person cannot record anything – so we’ll have to limit ourselves to recording the quantum leap of awakening). And, of course, there are time-starting, and time-terminating biological events: an individual’s birth and death (which give us the sense of a direction of biological clock from which we extrapolate the notion of a general one-way direction of time – a notion that is true for an individual, but is not true for a genus – whose existence, and therefore time, getting reset with every new birth).

Larger social objects show the exact same pattern of engendering both the gradual and the quantum time. In democracies, quantum events are elections in which governing parties and administrations change, leading to corresponding abrupt changes in policies. Time between elections is described by “one-hand visualization;” quantum leaps caused by seminal elections need “two-hand visualization.” And the same, quantum “two-hand visualization” is needed for the hugely disruptive social events like coups and wars.

If knowledge is to be considered an object, the same holds true for it, too: the gradual and steady accumulation of facts, pictured by “one-hand visualization,” is interrupted by sudden quantum leaps of understanding (think Copernicus, Galileo, Newton, Einstein, Bohr, Heisenberg), needing “two-hand visualization.”

There is an interesting peculiarity about the suggested method of visualizing time: the resulting image of time drawn on a whiteboard remains invisible both to the audience, and the presenter, the representing the “present” being blocked by presenter’s hand, and the marker; the moving marker is all that can be seen. Does this signify the difficulty of actually seeing time? Does it mean that though time is (so to speak) effused by an object, that object does not notice the time it effuses? The only way to show the actual moving dot that the presenter is drawing, is to replace the whiteboard with a glass screen, putting the presenter on one side of it, and the audience on the other – the presenter being inside a giant oscilloscope, as it were. And even then, the presenter will not see what is drawn, and the audience will see a mirror image of the movement of the dot.

Graphic depiction of what is not graphic by nature is always tricky, and the result is always approximate. Yet, analogies often prove helpful, and are used widely. It is therefore important that those analogies be accurate. May it be that the suggested method of graphic depiction of time will help better visualize, and explain what time actually is?

Lev Tsitrin is an attorney and founder of Coalition Against Judicial Fraud. He has been published in New English Review, Jerusalem Post, American Thinker, The American Spectator, The Jewish Voice (New York), and Attorney at Law Magazine. He notes that while Physics is by no means his forte, he was moved to those thoughts after reading a bio of Niels Bohr, the founder of quantum mechanics. One thing he learned from it, is that crazy thoughts should not be instantly dismissed, for they may not be crazy. Isn’t that a reasonable excuse to articulate some?