A review of Life at the Bottom, by Theodore Dalrymple 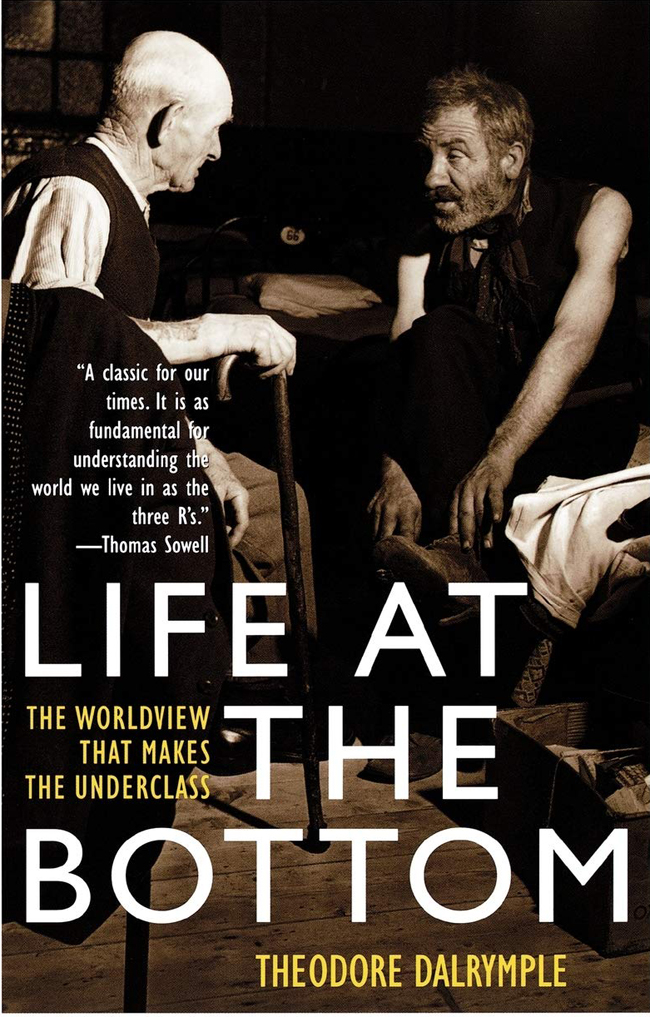 I picked up this book because I’ve found the author’s articles to be insightful, getting past superficial diagnoses for society’s ills to help us understand what’s really going on. I also appreciate his compassion. You might not have the same reaction, if you’re of a liberal bent, because Dalrymple sometimes borders on the acerbic, especially when the solutions to the problem under examination seem so ludicrously simple but are ignored. But clearly, he is motivated to write because he cares about people.

As you read the brief case studies throughout this book, you’ll likely observe in the author a frustrated but genuine desire to help the people who’ve come under his care as a physician. He writes to call attention to systemic ideological maladies that oppress people.

The group of people Dalrymple calls “the underclass” are those who are not thriving in life, often lapsing into criminality, addiction, and financial dependence. To anyone paying attention, the underclass is growing and is progressively worse off despite opportunity for self-improvement, and the myriad social safety nets in place. Something more is going on than the facile left-wing answer of poverty, clearly. The culprit according to those on the right is the welfare state, incentivizing personal decline, but that answer is incomplete, too. Dalrymple identifies an additional ingredient, the pernicious power of bad ideas more generally, creating a self-defeating worldview. He argues persuasively that these bad ideas originate with an intelligentsia able to toy with these broken concepts without being undone by them. But the ideas trickle down, causing untold harm to those unfortunates in the underclass:

Human behavior cannot be explained without reference to the meaning and intentions people give to their acts and omissions; and everyone has a Weltanschauung, a worldview, whether he knows it or not. It is the ideas my patients have that fascinate—and to be honest, appall—me; for they are the source of their own misery.

How are the members of the underclass the source of their own misery? They absorb a worldview from the corrosive culture of elites who ought to know better—and who, at some level, do know better, as evidenced by how they live their own lives. A good starting place for understanding this is the concept of agency. Agency is self-directedness; free will. A specific of agency is moral agency: the ability to choose between good and evil. Missing or compromised in the worldview of the underclass is confidence in choosing one’s course in life. Instead, the attitude tends to be that bad things just sort of happen, even when the bad thing is self-evidently a product of one’s own act or omission.

Thus, if we’re paying attention as Dalrymple has with his patients, we repeatedly observe locutions indicating a kind of passivity indicating belief that we are minimal participants in the harmful events or habits that beset us. For example, criminals who know perfectly well what they’ve done and why will nonetheless trot out stories of difficult childhoods or straitened circumstances to suggest these, rather than their own choice, are the proximate cause of their crimes. Where would such an idea come from? Why, from relentless excuse-making from liberal policy-makers trying to find root causes in anything but the criminal’s own bad decision-making and bad actions. It’s perhaps human nature to invoke these handy nostrums in order to minimize one’s culpability. But this kind of thing is pernicious. More such bad decision-making is thereby enabled, and the diminished agency that results is internalized. A person’s perception of his own free will becomes eroded, and passivity results. Cause is external, and so is effect. Things just sort of happen to me.

The bad policies are not just the bleatings of a hand-wringing few. They become institutionalized, over time. Of course a bad childhood or straitened circumstances are relevant to what makes a person who they are. But the relevance should be that these negatives can be overcome, precisely because we have agency. Instead, the opposite view acquires institutional status, rendering the excuse-making systemic. A large constituency exists for this worldview, like parasites on the underclass host:

[L]egions of helpers and carers, social workers and therapists, whose incomes depend crucially on the supposed incapacity of large numbers of people to fend for themselves or behave responsibly.

Trendy psychotherapeutic concepts gain currency even among the underclass, suggestive of unbidden motivations hidden within the roiling subconscious, inaccessible to the conscious, thus rendering one’s irresponsible acts a deep mystery over which he has no real control. Aiding and abetting these tendencies is an unthinking adoption of social determinism which compromises one’s ability to distinguish correlation and causation. Thus, because criminal behavior is more common among poorer classes, one surmises that poverty must be the cause of crime.

An overarching Marxist outlook further reinforces the helpless and passive worldview. It teaches against the Judeo-Christian presumption of individual moral agency; that a person’s consciousness determines his being. Instead, the operative concept is that one’s social circumstances determines one’s being. Again, social determinism rather than confident self-determination.

Dalrymple’s observant eye goes well beyond the passive slide into criminality, and reasons therefor. Bad interactions with law enforcement are but one symptom of helpless drift on a stormy sea of bad ideas. An appalling rate of near-suicides present themselves to him as a doctor. Certainly, specific facts will differ from case to case, but it is inescapable that there are also common elements to these episodes. Helplessness in the face of feckless destiny drives nihilism and self-absorbed boredom, a heady cocktail which manifests in suicidal gestures, some of which are incidentally successful. These ideas, too, are derived from cultural elites, expressed most compellingly in entertainments which reinforce the pathology of loss of agency.

The sexual revolution undermines individual thriving. Sexual libertinism as an experiment among elites becomes a lifestyle among people reduced in their humanity to brutes. Men and women come together as the vicissitudes of fate seem to decree, but people aren’t made to mate serially in meaningless contacts, especially when children result—children who are then reared in a replicating cycle of family dysfunction, perpetuating the lie of social determinism. Insightfully, Dalrymple ascribes to this fraudulent sexual lightness of being much of the violence to which the underclass unhappily becomes inured. It is often stoked by jealousy, because even as one is licentious, the desire for exclusivity in one’s partner remains.

In the paucity of unique and original undertakings in the exercise of genuine agency, a pathetic groping after authenticity is perpetually present, expressed perhaps in a posturing bohemian aesthetic, or choices in clothing and style and music that seem to express individualism, but echo the anti-authoritarian chic that patches over the perceived loss of genuine agency. Much of the underclass in this posture is “condemned to live in the eternal present,” unable to see outside the bubble of time and place in which they find themselves. Self-absorption takes the place of self-autonomy, and life becomes boring. Hapless floating through a world made by others results in a delimited imagined time-horizon:

They never awoke to the fact that a life is a biography, not a series of disconnected moments, more or less pleasurable but increasingly tedious and unsatisfying unless one imposes a purposive pattern upon them.

Add to this stew the bad idea, contrary to Judeo-Christian principles and increasingly propagated at least since the time of Jean-Jacques Rousseau in the 18th century, that people are basically good; that the default setting of humanity is to virtue and harmony. Amongst the noble savages of the streets and their intellectual forbears in the salons, the existence of police to preserve law and order is a standing affront. It’s not just the co-existence of cops and robbers that creates tension. It’s the co-existence of, on the one hand, angry anti-authority conformism; and on the other hand, imperfect but civilized autonomous individualism. If someone should suffer for relentless criminal hatred of civilization, shouldn’t it be the criminals, rather than the victims? Of course, we want people free and thriving, but that is not the reality these bad ideas have created. We should have a heart for those whose lives are hemmed in by a cacophony of bad ideas emanating from cultural elites in this age. But we should first protect the poor and the old who are imprisoned in their homes by hoodlums.

The welfare state is not the sole progenitor of these bad ideas; they are more fully explained by cultural development. But the welfare state is gas on the fire, so to speak. It institutionalizes this unhealthy worldview by implementing its bad assumptions into law. Dalrymple, comparing conditions in third-world countries (that have no welfare state) to modern England:

[N]othing I saw [in those countries]—neither the poverty nor the overt oppression—ever had the same devastating effect on the human personality as the undiscriminating welfare state. I never saw the loss of dignity, the self-centeredness, the spiritual and emotional vacuity, or the sheer ignorance of how to live that I see daily in England . . . [T]he worst poverty is in England—and it is not material poverty but poverty of soul.

As in England, so in America. We are, as I write, at the 20th anniversary of the publishing of this remarkable book. The intervening years have not diminished its potency one jot. To the contrary, extrapolation forward of its themes lands us right where we are today. The worldview that erodes personal responsibility must be overcome.