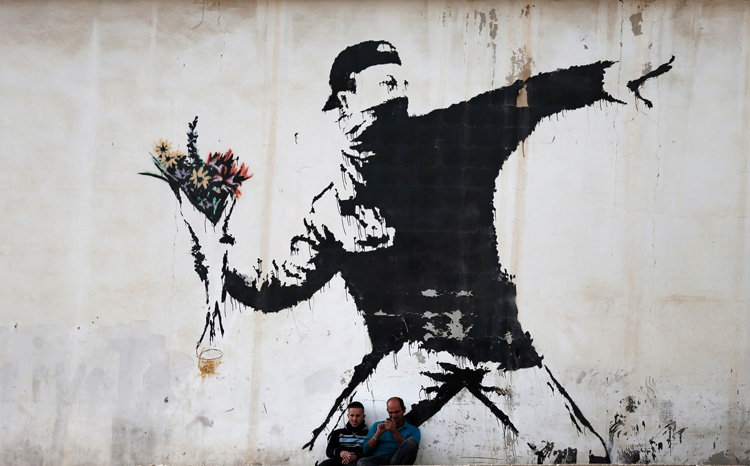 There is a perverse pleasure is engaging in vandalism. It was Orwell, I think, who pointed out the satisfaction of smashing things.

There are other types of vandalism, of course, such as teenage louts writing obscenities on sidewalks and walls and their ubiquitous spray-painting of walls, trucks and subway trains.

But there is another type of vandalism that is rarely mentioned as such, one that has become widespread in the West, namely ideological vandalism. Using ideology as the basis for the vandalism, it is taking a person, tradition, idea or object that has been traditionally seen with respect, if not veneration, and repeatedly hurling all sorts of labels, lies, and distortions on it. Just like the other types of vandalism. Acts of ideological vandalism are always carried out by hate-filled intellectuals, the type that Eric Hoffer described so well and George Orwell so despised.

Consider the following acts of ideological vandalism in the United States. They may appear unrelated to each other but in reality are part of an overall, interconnected, pattern of ideological vandalism. The “accusations” behind the vandalism are often self-evidently absurd and false, but the ideological vandals are relentless and vociferous and they are aided by sympathizers who have the same goal: besmirch and tear down everything good and noble within the culture. They are further aided by the fact that persons who see the absurdity and the lie are too cowardly, or too lazy, to object effectively (partly because the few who are not intimidated do not get together to form groups).

The classic toy of Mr. Potato Head was declared to be racist. No word yet as to whether Mrs. Potato Head is also racist. Thomas the Train was also labeled racist. And sexist.

Thanksgiving is a day of being with family and expressing gratitude and benevolence, a day to take stock and be thankful for what you have. In bizarre, non sequitur manner, it has been condemned as a day of genocide.

Columbus Day has also been targeted because the explorer committed genocide—there goes that word again (liberals love it). Except that the accusation is a complete and total lie by Marxists, but accepted by individuals colossally ignorant of history. A Maine legislator (who should learn that words have precise meaning) went so far to state that Columbus was “a war criminal.”

Halloween, which some have declared should be renamed Orange and Black Day for some unknown reason, is now burdened with “cultural appropriation” gibberish.

The belief in meritocracy, that is, that persons who exhibit talent, high intelligence and/or hard work achieve their goals in sports, education, science, exploration, music, art, in spite of obstacles, and are deserving of praise and admiration has been condemned by some. Professor Natasha Warikoo of Harvard University, for one, bemoans the fact that meritocracy in the realm of college admissions “reproduces inequality.” Well, duh. Since not everyone is allowed to attend, the university should admit only the brightest. Besides, inequality is a basic fact of life: everyone is not equal in every trait, whether it is intelligence, swimming ability, memorization, height, weight, mechanical ability, eyesight, congeniality, grooming, etc. Apparently, such an elementary idea is beyond the ken of Warikoo. Harvard, it should be pointed out, has instituted a racist policy against Asian student applicants because they are too intelligent so they should make room for stupid applicants.

The creator of Kwanzaa was one Maulana Ndabezitha Karenga, aka, Ron Everett, a racist psychopath who liked to torture naked women, which, of course, qualified him for a teaching position of “Africana Studies” at California State University, Long Beach, as well as a stint in prison. However, in spite of years-long campaign, nobody ever seriously took the idea of replacing Christmas with “Kwanzaa.”

And also just in time for Christmas, one Eric Sprankle, a Minnesota State University psychologist, who claims to be a sex therapist, declared that God raped Mary, mother of Jesus. Sprankle is what we call in the profession as One Sick F**k.

The song, “Baby, It’s Cold Outside” has now being targeted by the vandals. They say it is detrimental to women. But rap lyrics about “bitches” and “hos” are OK!

The Salvation Army, which distributes food and clothing to people whenever disasters occur, as well as on Christmas, yep, it too has been targeted.

Psychologist Barbara Greenberg wants schools to ban students from having a best friend, because . . . it is “exclusionary.”

A group of students in London went into the Blighty Café and made a speech against Winston Churchill, the anti-Nazi warrior, and demanded that an image of Churchill be taken down. It wasn’t taken down.

Activists at California State University, Long Beach, wanted the statue of the college mascot (a gold prospector) abolished, because they claim is a sign of “genocide” (they really should look up the meaning of the word in a book called Dictionary).

There is a movement afoot in Yale to “decolonize” the English Department (why do leftists keep mutilating the meaning of words? Why do they have a penchant for raping the language?) by removing white authors such as Shakespeare, Poe, and Chaucer because being exposed to those writers is “harmful.”

When the much beloved former First Lady Barbara Bush passed away, a grotesque gargoyle named Randa Jarrar who is an English professor in Fresno State rejoiced, saying she was glad that Mrs. Bush had died, insulting her in the process. She was subsequently applauded by a group of literary poseurs for her “courage.”

Books by Dr. Seuss are racist. Sure. Just like Jingle Bells. So it should have come as no surprise when the Boy Scouts were targeted, the attacks finally relented when they admitted homosexuals (can you say “smorgasbord”?) and girls. Thereafter, it soon filed for bankruptcy.

The University of Wyoming has a new slogan, “The World Needs More Cowboys,” caused associate professor of kinesiology and health, Christine Porter, to whine: “I am not the only person for whom the word ‘cowboy’ invokes a white, macho, male, able-bodied, heterosexual, U.S.-born person.”

Leftists attacked the national anthem as “racist” and encouraged those overpaid, overglorified, NFL football players to kneel in protest as the anthem is played in games.

Historical statues have been removed (in New Orleans, Los Angeles, Wichita, Washington D.C., San Antonio, San Francisco and others) by leftist politicians or destroyed outright by their hysterical leftist progeny (e.g., in Durham, Sylvania). This destruction was very popular with the Red guards of China. Tearing down old statutes is the modern equivalent of book burning.

The burning of books will be next.

Comedian Kevin Hart and his wife threw a birthday party for their child, with the theme being cowboys and Indians. They were attacked in social media for committing such an unforgivable crime.

Read more in New English Review:
• Spinoza and Friends
• Much More than a Trade War in China
• Days and Work (Part Two)

Even children are not safe from ideological vandalism. The number of transgender persons in the country is microscopic but they and their promoters seem to want to increase their numbers and they have set their sights on impressionable children. Sympathizers of this trend are in schools, not only sanitizing the idea, but even promoting it, regardless of the parents’ wishes (in Canada, it is much worse). This push to convince children that they are transgender has been opposed by several doctors, some of them being in the field of gender dysphoria, while many others have pointed out the obvious, namely, that it is child abuse. One only has to see and hear the results.

Unfortunately, there is no letup in sight. The ideological vandals and their apologists are relentless. So it will continue to be this way if people who object to this ideological vandalism do not band together (as the vandals do, so effectively) to fight back. But don’t hold your breath.