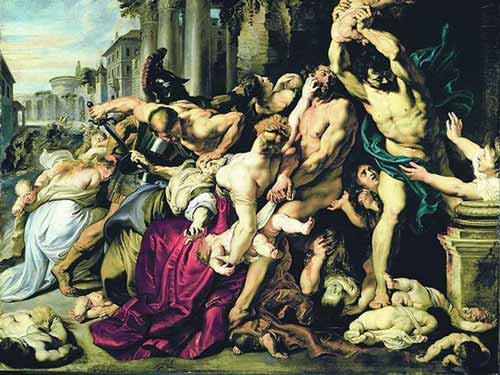 Kenneth R. Timmerman is a veteran Iran watcher, an intrepid investigative journalist and advocate for the protection of persecuted Christians in the Middle East. He first disclosed through his reporting in 2008, the virtual genocide of the ancient Iraqi Assyrian-Chaldean and Syriac Christian communities during the Second Gulf War. His reporting revealed the eminent failure of US refugee resettlement policies to override the control of the UN High Commissioner for Refugees. This thwarted admission of these Christian communities threatened with genocide whether it be Shi’ite Iran, Al Qaeda or ISIS. The jihadism of pure Salafist Islam infused with the hard core of the Iraqi Ba’ahist intelligence and security operatives of the late Saddam Hussein’s brutal regime threatened Christians and Yazidis.

Timmerman is a New York Times best-selling author of the 2005 Countdown to Crisis: the coming Nuclear Showdown with IranShadow Warriors: The Untold Story of Traitors, Saboteurs and the Party of SurrenderDark Forces; The Truth About What Really Happened in BenghaziDeception: the Making of the You Tube video Hillary and Obama Blamed for Benghazi.

Timmerman has written several thrillers, the 2007 Honor Killing about the murder of an American Muslim woman and the technical chase to prevent a nuclear device secreted into Washington, DC by Iran for detonation on the Fourth of July. One of the characters in Honor Killing, a US spec ops officer, Danny Wilkens, whose surfaces again in ISIS Begins; A Novel of the Iraq War  leading a spec ops IG team chasing down Jihadis and rogue contractors.

Timmerman dedicates ISIS Begins to;” For the brave Iraqi Christian interpreters who risked their lives to help their American liberators, and for the Families of the martyrs.”

Against this background, we interviewed Kenneth R. Timmerman on Israel News Talk Radio-Beyond the Matrix shortly after the publication of ISIS Begins on July 10, 2018. 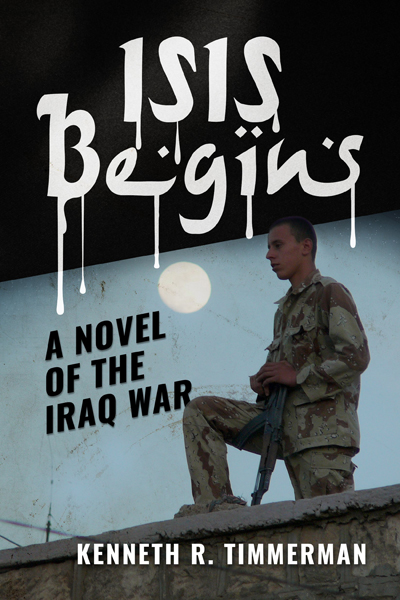 Gordon: In this new book you have has an interesting character, a relative of the late Saddam Hussein and a Ba’athist party figure who appears to be a double agent recruited by the CIA. Is there any factual basis for that and what examples can you cite of how former Ba’athist military became the core of the ISIS security system that launched its rise in both Syria and Iraq?

Timmerman: That is how ISIS begins and it is the title of the book. ISIS is in fact the combination or the union of the former Ba’athist intelligence networks and the jihadi networks inside Iraq and you see how they operate in my book. This is actually one of the first novels of the Iraq war. There haven’t been an awful lot that have come out yet. My main character is an Assyrian Christian interpreter. To anyone who has served in Iraq he will be a very familiar character because Americans who have served in Iraq were dealing with people like this all the time. They called them “terps”—short for interpreters—and so they’ll recognize my guy. His name is Yohannes; however he uses the American nickname Johnny. So you have a very recognizable character at the center of this book. He tells the story of the persecution of his family; he is on operations with a U.S. Spec Ops Team, taking down a jihadi group. They discovered this strange text the Americans think it must be written in code, In fact it is written in Aramaic which Johnny of course can read. So this is part of the plot line of the book. There are lots of twists and turns in the plot but I did want to keep it close enough to reality that people who have been to Iraq or served in Iraq would immediately recognize it.

Anybody who has been to Northern Iraq will recognize my descriptions of the road between Erbil and Mosul and the dangers that lurk in the desert there. That will immediately hit home to them. I had a couple of weapons techs who helped me in my selection of weaponry in the book. You will see references to a lot of Glock 19s but there is also a Barrett Light 50 that comes in from time to time and does its thing. At the end there is a fuel air explosive which is a rather unusual weapon. I happen to know something about that from personal experience, having been held by the PLO in Beirut in 1982 in a building that was blown up with a fuel air explosive by the Israeli Air Force two hours after I was released from inside it. So there was a little personal experience thrown into that as well.

Gordon: Was there any CIA treatment of these Ba’athists who were forming the core of what became ISIS?

Bryant: At the start of the Second Gulf War in 2003 there were approximately 1.5 million Iraqi Assyrian Christians in Northern Iraq and on the plains of biblical Nineveh. Talk about their heritage, and the conflicts they had with Saddam Hussein’s regime, with the Kurds, and with Iran? What is their current status?

Timmerman: The tragedy of the 1.5 million Iraqi Assyrian Christian population before the 2003 liberation of Iraq is that today only about 280,000 to 300,000 remain. There has been a “religiocide” of Iraqi Christians and that is why I wrote ISIS Begins. I wanted Americans, especially Christian Americans but not only Christian Americans, to recognize what is going on. To recognize that Christians are being persecuted in Iraq under our very eyes as we ourselves were militarily occupying the country. Christians were being murdered for their faith and we did nothing about it. I chose this Iraqi Christian interpreter as my central character as he gets chased by the jihadis. I wanted you to be able to feel, smell and taste what it’s like to be a Christian in those circumstances when you look around you in a crowd and you understand that half the people who were there if not more all want to kill you.

Bryant: How many of these were people who became refugees and went to another country? Were there that many?

Timmerman: Most of them were driven out because of this conscious, ruthless effort at religious genocide to eradicate the Iraqi Christian population. Some became refugees because they had gone into the Kurdish areas. While the Kurds welcomed them, the Kurds also had an imperial relationship towards the Assyrian Christians. They denied their identity. They wanted them to become Christian Kurds. They are not Christian Kurds; they are Assyrians, Chaldeans or Syriacs. It is a separate ethnic identity and the Kurds have had a really hard time recognizing it so some people have been driven out for those reasons as well. They see no possibility of developing their homeland.

Gordon: We have a mutual friend, Joseph Kassab, who has been involved as an advocate for refugee resettlement for Assyrian-Chaldean–Syriac Christians who are still threatened. What is it this government could do to save this ancient remnant from being further persecuted? 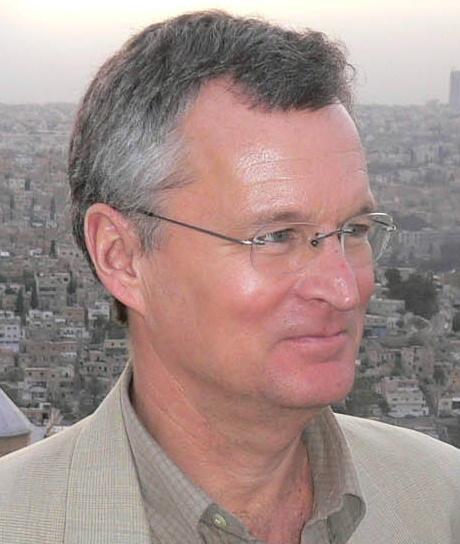 erman: I was involved in a separate initiative, at the end of the Bush 43 Administration, to bring some of these people into this country. They included the Christian Interpreters who have helped us, the people who have worked at our embassy and our consulate up in the north who have been targeted by the jihadis. We promised them we would help get them out and we didn’t do it. When I came back from one of these mission trips in 2008, Ellen Sauerbrey, who I happened to know from Maryland politics, was the senior person at the State Department, the political appointee in charge of refugee resettlement. She had no awareness whatsoever, she had never been briefed on it by her underlings who hated Iraqi Christians and wanted to bring Muslims into this country instead. That is what was happening through the UN Refugee Organizations. I tell this story in ISIS Begins. There is a scene that is ripped out of my own reporting. I can tell you that when Christians go in to the UNHCR in Amman, Jordan or another location they are identified, the intake officers, who are Muslim, immediately understand if they are Christian or not. If they are Christian, their file goes in the circular file and there is no attempt to resettle them.

Bryant: Is there any logic behind that?

Timmerman: Yes, it’s called jihadism. It’s called Muslims who want to see the religiocide of Christians in the Middle East. I made a recent trip, last summer to the Nineveh Plain of Northern Iraq just before finishing up ISIS Begins. There are groups who would like to resettle now that the Nineveh Plain has been liberated from ISIS. It has been completely destroyed. Unbelievable! The churches have been torn down, they violated the crosses. They would like to get people to invest in the Nineveh Plain so they can at least anchor a remnant of the community on their historic land, which goes back to the time of St. Thomas in the 1st Century. The Assyrian Christians were proselytized by St. Thomas. They still speak Aramaic, the language of Jesus. This is something we don’t realize here in the United States. I also had the preeminent Assyrian Aramaic linguist Nineb Lamassu, who wrote the dictionary of Modern Aramaic; assisted me in those sections of the book where there were Aramaic phrases. So, all of that is absolutely authentic. It has been vetted, corrected and made sure that it is authentic.

Gordon: In ISIS Begins, one of the plot lines which is fascinating is a contest between jihadis and the Vatican. These threats are arrayed against the guardians of the sacred book in the mountain monastery of Mar Homizid on the Nineveh Plains in the town of Al Qosh. What is the significance of the fateful meeting between Nestorian Monk Bahira and the young Mohammed?

Timmerman: There is a long-standing Middle Eastern tradition, and it’s not just a Christian tradition, that parts of the Quran were dictated to Muhammad not by the angel Gabriel but by a Christian Monk named Bahira. There is even a Hadith; a Hadith is a saying of Mohammed, by the most authentic of the Hadith gatherers, Sahih Bukhari, that recounts the story of this Orthodox monk who was said to be the origin, the one who actually dictated parts of the Quran. In my story I imagine a secret historical document, the diary of these monks as they are teaching Muhammad and they progressively become aghast at what he has become. In the end, it’s all tearing of hair and gnashing of teeth, and they say oh my gosh what have we done? What is this monster we have begotten? We were trying to spread the gospel through him and in fact he is just a sex fiend, a maniac and a murderer. That is one of the subplots of ISIS Begins. I wanted to make it interesting for people to read, give you a little intrigue about the origins of Islam as well as have an authentic historical background to it. It is not purely fiction.

Gordon: What are you going to do next after ISIS Begins?

Timmerman: I have actually finished a memoir that should be out next year. Stories of my time on the road with the lost boys of Beirut to Baghdad. That includes in the later case, information on the Generals and the heads of the nuclear weapons programs. Lots of stories to tell.

PrevOn the Occasion of Susan Jacoby’s Why Baseball Matters
Israel, Iran, Syria and Europe: Interview with Shoshana Bryen of the Jewish Policy CenterNext