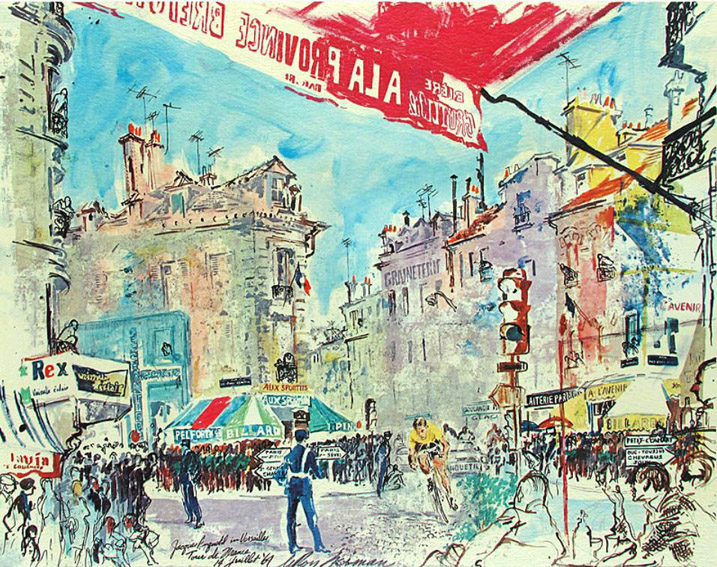 The struggle, the suspense, the impossible, the beautiful, the fanciful, the bleak . . . and that’s only the background!

I’m talking about the Tour de France, television’s best show of the year, every year, in July.

Over the past 50 years, I have seen it develop from grainy black and white still photographs, showing the pain etched on the rider’s faces, to a full logistic and communications miracle, the pain now in full technicolor.

The show now takes us all on a magnificent tour of la belle France while covering the race in incroyable detail and every stage is a battle for your senses, and I mean all of them.

First of all is the colour—the the bikes, the team strip, the bunting, every day a kaleidoscope as these superhuman athletes congregate for the Start  each morning. The atmosphere tingling with excitement and anticipation, in a part of the world where professional cyclists are like Rock Gods.

In North America, they could walk in just about any city unmolested.

I am still like a child when I see them on TV.  My admiration just knows no bounds, knowing as I do that, even back in the flower of my youth—when I was as fit as I could possibly be—I wouldn’t have been able to stick in the peloton with them for even one minute when a chase was on.

But my admiration isn’t restricted to the riders alone. It’s not like watching a football game or a tennis match; this is a fusion of history, achievement, technological advancement, grinta, architecture, politics, skulduggery and triumph over adversity. Back in the early 1960s, one of the riders was quoted as saying, “It isn’t possible to finish the Tour de France without drugs. Even with drugs, it is still the severest endurance test of any athletic pursuit.”

Even so, the drugs and cheating scandals have taken nothing away from the overall spectacle, because the race itself isn’t only about the cyclists. The race is just as much about France and its incredible scenery: its rivers, its Chateaus, its famous villages and towns, places like Bordeaux, Limoges, The Champagne Region, Alsace, The Central Massif, The Palace at Versailles, Nice . . . the Alps, for goodness sake . . . and of course Paris.

The Tour has visited most of the neighbouring European countries with the travelling road show and wherever they go, the event is greeted with goodwill and gratitude for the honour of hosting a stage. It’s always teeming with spectators.

With over 150 riders, their equipment and their support people, they somehow manage to get everyone to the start line every morning. The media train that follows them around is in lockstep with the entire procession. On every stage the route is lined with fans, almost from start to finish.

And how come there are so many spectators? Why aren’t they at work?

You have to know something about French culture to understand but, in broad terms, the entire country takes July and August off as vacation!

The media train has developed into a phenomenal technical marvel. They have guys on motorbikes with a cameraman on the pillion seat giving us absolutely fabulous close up images of riders blowing along at 50 mph—and of crashes, blood-soaked jerseys, skinned legs and shoulders, bikes smashed to pieces in crashes and yet the show rolls on. These motorbike riders and camera men are in constant danger themselves and yet they never seem to back off from giving us just what we want.

When they can’t get in close, there are the overheads from helicopters. Again the camera work is just spectacular as they show us the frightening drops, the hairpin bends and the snow covered mountain passes that have to be conquered by the riders. Most of the people that I know couldn’t comprehend the brutality of the climbs and yet these guys take them in stride as if they were riding on the flat.

The cyclists sometimes crash at high speed, hit barbed wire fences and get ripped to pieces but, invariably, they climb back on the bike and chase like hell to get back in the bunch. I don’t think too many would apply online for a job like that

What makes the Tour so special is its multidimensional appeal. You can watch the aforementioned football game or tennis game and be completely focused on the result. You may even get bored because there’s not enough action. But the Grand Boucle (as it’s known) gives us so much more because they have developed a tradition (since the introduction of the helicopter coverage) of providing us with commentators who are also fabulous raconteurs and history professors.

Phil Liggett and the too-soon departed Paul Sherwen polished the commentaries to a fine art, to the point where you enjoy the history as much as the race.

On a long stage of the race it can become a little humdrum as we are waiting for the big guys to sort themselves out, but the magic begins to flow when we are shown the aerial shots of the wonderful churches, cathedrals, hamlets and cities they roll through. With those aerial shots come the well-educated words of the commentators and they know their stuff! Chateaus from the 12th century, cathedrals that took over 100 years to build, the political and religious upheaval that led to their establishment or destruction. I’ve learned more about the history of France from Tour coverage than I ever did at school!

Then we have the river valleys: the beautiful, vast, wooded areas that surprise us with their ubiquity, the endless vineyards, the unbelievably fertile farmlands and the subtropical south coast. On top of that, they have ski resorts, waterfalls, mountain lakes and have even drilled a tunnel through Mont Blanc! Is there another country in the world blessed with such diverse topography in such a compact space?

All of this we learn as the riders are barrelling along, plotting and scheming against one another for victory in much the same way Cardinal Richelieu did in the days when a lot of these monuments were first erected!

Riders don’t barrel along without the help of the team support staff and this include doctors, nurses, masseurs, psychologists, mechanics, strategists and, of course, a team manager, the guy who calls all the shots.

The Manager is the unquestioned boss. If he says jump or if he says ride yourself to within one inch of your death, well, that’s what you do. As far as I know, only Greg Lemond has had the nerve to sass back at his team manager and live to tell the tale but the bedrock policy is you do what you’re told!

It’s when we get to the level of doctors, nurses and masseurs that the seedy side of the business surfaces, as figures start to appear with potions, vitamins and snake oil to give an edge to performance.

Not much of a leap from legal performance aids to those of an illegal nature and, before you know it, they’re an indispensable part of the process. The media would have us believe that it’s all cleaned up now but I don’t buy it for one second. I go back to the quote “You can’t finish the tour without drugs” and rest my case.

I mentioned the motorbike cameramen earlier and cited their bravery but none can match the bravery of the team mechanics. Anyone who has watched the tour on TV will have seen them hanging out of the team car doing about 40 miles per hour while adjusting some malfunction on the gears of a bike. All of them have to have complete confidence in eachother: the riders, the drivers and mechanics because one tiny mistake and everybody’s in hospital!

How can history and this monumental human effort come together so easily and capture the interest of not only France, but of the world at large?

Well, as you look at the storied architecture and the struggles that were overcome to get chateaus or bridges built over 500 years ago, or aqueducts that were built before any sort of power tools were invented, you start to realise that the race in itself is an allegory for the running of society. Human capabilities, persistence and frailties on display at every level.

Read more in New English Review:
• Reminiscences from the Music Scene in LA in the Early Eighties
• Trippin’ with Tim
• Rag & Bone

Each day we see well planned policies fall apart. Each and every day there are accidents, fractious individuals within teams, sneak attacks and false stories.

And then, after a day long campaign where everyone has worked to their limit, the winner across the line quite often is only separated by a hair’s breadth from the loser, just like some referendum results.

Other days, someone breaks away to a landslide victory and no one can explain it; there’s cheating and double crossing, there’s backroom deals to accommodate sponsors and then there’s just plain exhaustion, so you can never really tell whether a win is genuine.

The redeeming nature though, is the way the absolute favourites come through on the gruelling climbs, The Ventoux, The Alpe d’Huez, The Galibier, these are the places where the cold hard steel of heroes are forged.

Drugs be damned! They’re all on something, so it’s always mano-a-mano and it’s always a matter of who cracks first! Such exciting stuff!

Victory belongs, in that allegorical sense, to survival of the fittest and smartest and the ones who make best use of their resources, just like life itself.

If you look at the map which lays out the 2500 miles or so to be covered in 25 days at top speed by these men on bikes, you might say, “It can’t be done! No human being has that much endurance or capability! They would surely die in attempting to complete it!”

The engineers and architects from the 14th century, must have been met with similar skepticism. Yet they forged ahead and built chateaus on mountain summits or achingly beautiful cathedrals on river islands with only self-propelled power which, to close the circle, is the only thing that the Tour de France riders have at their disposal.

And so my interest in history, my interest in cycling, my interest in human struggles and morality, my edge-of-the seat excitement . . . all of these needs are satisfied in one all encompassing production. I don’t care about the drug scandals, I don’t really care who wins or loses. I just love the story.

PrevDavid Bellavia Steps Up Again: A Medal and a Speech
The CommuterNext