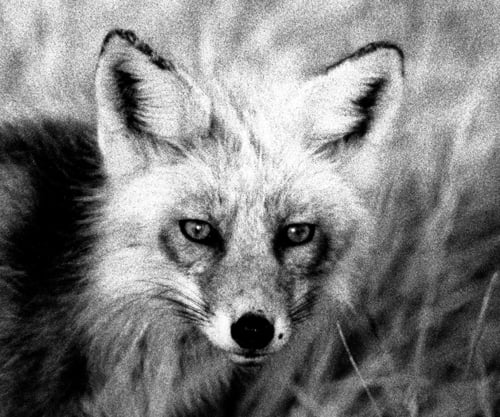 Kitsune is the Japanese word for fox. Foxes are a common subject of Japanese folklore

hen I was ten, my father, who was genetically opposed to authority, lost his third job in a row, and moved us to the Jersey shore, where he opened a convenience store in a sagging, weather-beaten shack located near the entrance to Island Beach State Park. The park, one of New Jersey’s hidden wonders, basically consists of a long barrier island with the ocean on one side and a wide bay on the other. On the ocean side are sweeping dunes and beaches, and on the bay side salt marshes and an occasional stand of scrub pine. We lived above the store, which was busy all summer with people going in and out of the park picking up supplies. I saw how hard my parents were working and did not rebel, though I wanted to, when they asked me to help.

That summer, which was hot and hazy and quite beautiful, like all Jersey shore summers, a pretty blonde woman came into the store regularly in a bikini, a gauzy blouse and flip flops, which is what my heart did when I saw her. She often asked me to help her, which I did in a frozen, speechless state that I could not understand, except that I knew it had something to do with her mostly naked body and long blonde hair. She took to calling me Ricky, which is not my name, saying I looked like Ricky Nelson of Ozzie and Harriet. The cute one, she’d say. One day, she came in with a dark-haired man smoking a cigarette. That night I dreamt that man had died falling off a cliff. I had other dreams that summer, which I now know were the first urgings of my up-until-then dormant sexuality.

The store stayed busy until October, but after that I was free. After school and on weekends, I explored the park, sliding down the dunes, throwing shells at gulls and walking the trails in the marshes, which is where, on a cold day in February, I came across a family of foxes. They had no fear of me. In fact, I was startled when I first saw them, whereas they simply turned and stared as I walked slowly by. I took to sitting on a nearby rise to watch them. I thought at first that there were just two adults, one slightly bigger than the other, but one day I saw three pups scampering around in and out of the marsh grass near a gnarly, stunted pine tree. I gave them names (Mother, Father, Archie, Veronica and Jughead) and went, in all kinds of weather, even snow, which there was a lot of that year, two or three times a week to sit and watch. An only child, in a new school, I did a lot of daydreaming that winter sitting on that rise. Some were about great athletic feats I performed, but most were about the blonde lady in the bikini. I saved her from a lot of disasters that winter, or rather Ricky did, for which she was very grateful.

As the winter got colder and more snow fell, Mother began to creep closer and closer and stare at me. There was something about the way she looked at me that made me uncomfortable, but I couldn’t put my finger on it until one day Jughead was missing. The next day he was missing again, and the next. They were hungry. I didn’t know what they ate, but I figured day old bread and baloney wouldn’t hurt, so that’s what I brought them. They ate so much that I had to tell my mother what I was doing. She just shrugged and said, don’t tell your father. By spring, the fox family, minus Jughead, was healthy and I was relieved to see that Mother was no longer looking at me in that strange way. My daydreaming had slowed down a bit because I was worried about the foxes, but of course I still had the bikini lady on my mind and was looking forward to seeing her in the summer.

I was sound asleep on the first warm night in April when the bikini lady shook me awake. There’s a fire, Ricky, she said, wake up your parents. I was dreaming of course, but I did smell smoke. Something was burning. My parents always left their bedroom door ajar, the rule being, however, that I always knocked and asked if I could come in. I actually knocked that night, but very loudly, and in a few minutes we were on the street watching flames lick up one side of the old building as we heard the town’s volunteer fire alarm wailing in the distance.

We drove to north Jersey that night to stay with my mother’s sister and her husband. My parents lost the store (there was no such thing as insurance in their world) and moved on to other dreams. My first year in college I met a Japanese-American girl who told me about the subject of a paper she was writing: kitsune. That same summer I drove to the park and wandered along the marsh trails until I found the rise I used to sit on. Memories of the bikini lady, her dead boyfriend, the foxes and the fire came rushing back. I went over to the stunted pine tree and circled the area around it where the pups used to play. I stumbled once and looked down through the marsh grass to see a group of white stones on the ground. Looking closer, I saw they were tiny bones, including a perfectly formed animal skull.

Jughead, I thought, you saved my life.

________________________________
James LePore practiced law for twenty-plus years, then turned to writing fiction and taking pictures full time in 1999. In 2009 his first novel, A World I Never Made, was published by The Story Plant. Four others, in what LePore calls The Invictus Cycle, followed. He has written a book of short stories called Anyone Can Die, a volume of flash fiction (Blood, Light and Time) that evolved from a series of blog posts, and three historical novels with the screenwriter Carlos Davis, featuring J.R.R. Tolkien and Ian Fleming in WW2 espionage adventures. His most recent books are the novellas Breathe in Grace and Eyes of a Wolf. His website is here.