I received yet another piece of spam the other day from a spambot trying to sound human by calling itself the unlikely name of Kwok Quirke.

Unlikely that is unless you happen to be familiar with the work of two fine actors known to British TV, Burt Kwouk and Pauline Quirke. At first glance they seem quite disparate, other than the fact that I like them both, but on examination they have qualities in common.

Burt Kwouk is over 75 years old and Chinese (born in Manchester, because that is where his mother happened to be at the time, but brought up in Shanghai).

Pauline Quirke is 48 and a Londoner.
Both are probably best known for comedy but both have done powerful serious drama.

Of the two Burt Kwouk will be better known to non UK readers. I do not know anything about his earliest career but his most famous role is that of Kato the martial arts expert in the Pink Panther films. In the James Bond films he has been Mr Ling in Goldfinger and Spectre Agent No 3 in You Only Live Twice, roles classified by Wikipedia (that great authority) as henchmen, rather than villains.

I particularly admired his portrayal in Tenko, the BBC drama of the 1980s about women prisoners of the Japanese, of Captain Yamauchi the commandant of the final camp where the women were interned. He brought depth and sympathy to a difficult role, a man who was not himself a wicked person, but who could not, or did not restrain sadistic men under his command and who was eventually sentenced to death for war crimes.

Another serious role was in the film The Shoes of the Fisherman, about the Russian Pope Basil played by Anthony Quinn, when he played the Chinese leader who may bring war to the Far East.

He has done Hollywood films and roles in many great British TV shows including Dr Who and The Avengers. Then he went on to be himself in Harry Hill’s totally barmy TV comedy and now he is in the long running comedy Last of the Summer Wine. He plays Entwhistle, a semi retired electrician with a van, from the mysterious east – Hull.

Pauline Quirke was born in Hackney and I believe she went to the same school as some of my cousins. She has been acting since she was a child and became well known with her school friend Linda Robson, first in Shine on Harvey Moon, then in Birds of a Feather. Maisie Raine wasn’t that good, but, while it was uncomfortable viewing, she was excellent as The Sculptress. She played a woman convicted of murder, nicknamed “the sculptress” for reasons I won’t spoil the plot by mentioning.

They have a different quality in their comedy. Burt Kwouk’s is physical. Kato was a very physical role and he reminds me in that respect of the late Bill Owen who was Compo in Summer Wine.

Pauline Quirke’s skill is in the use of language, the quick speech rhythms and timing of the intelligent cockney. In those daft quizzes in Sunday magazines when the question is asked “Who would you want to play you in a film of your life” I would pick her to play me.

They have never appeared together in any film or TV work that I can find. The only place I can find their names linked is in the roll of celebrity fund raisers for a children’s leukemia charity.

So I decided to imagine a vehicle for them both. It would be simple to write Pauline Quirke into Last of the Summer Wine. She could be a friend of Glenda and join the coffee time ladies but it wouldn’t get her into any scenes with Entwhistle, who spends his days ferrying the other daft old men about in his van.

A completely new comedy has to be written. And I think it has to be a comedy. Good as they both are in serious drama there is not enough good comedy on the screen this summer and it is their duty to use their talents to make us laugh. I’m not a scriptwriter so somebody else will have to write the scripts. Just credit me with the original idea, come the BAFTA awards.

Many of the best and most popular programmes have a definite sense of place. LOTSW is known for its Yorkshire setting, in and around Holmfirth, likewise Heartbeat on the North York Moors. Birds of a Feather was set in and around Chigwell Essex with a lot of local jokes and real knowledge of the area.

North Essex and Suffolk was a feature of Lovejoy, but not much, and little of it positive, has been done in and around South Essex.

So I propose we set our new comedy around Southend, famous for its pier, and nearby Leigh on Sea. Specifically the historic Leigh Cockle sheds, which are the retail outlets for the Leigh Cockle and shell fish industry. The old East End sea food suppers are legendary, cockles, prawns, whelks, jellied eels, winkles eaten with a pin. The ancient Essex fishing industry is how all this is supplied.

Pauline will play Sandra, the proprietor of one of the Cockle businesses, a family firm established 150 years ago by her great, great grandparents. She took over when her father died 10 years ago. Her Mum, Edna, met her dad when she was doing the jellied eel run round the pubs of east London. Her aunt Bea, (Dad’s younger sister) married Tom Chang (this is Burt Kwouk) a former merchant seaman in 1957.

Sandra and her young family run the business.

The researcher will have to talk to the old families. Some of these businesses are in the hands of the 5th and 6th generations. Leigh Cockle boats went to Dunkirk and a whole family of men died during the evacuation.

Yes it will be formulaic, but in many respects even Shakespeare knew a winning formula when he saw it. Much will depend on the quality of the writing and I only want the best. I am confident that the quality of the cast will do justice to the scripts.

How could it fail? 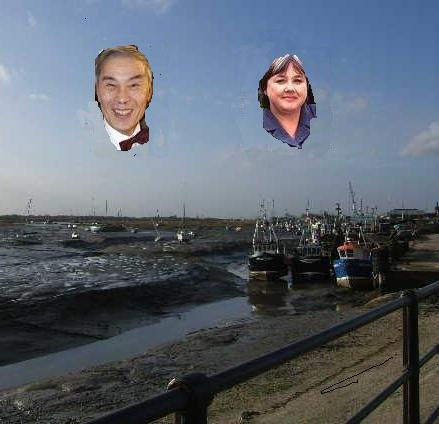 I wrote the whole article without succumbing to the temptation to say “This series will warm the cockles of your heart”.

Photo of boats at Leigh 0n Sea by Mustrum Ridcully, bad photosuite effect by me.

To help New English Review continue to publish interesting and unusual articles such as this one, please click here.