Last Voices of a Generation

We had good weather for it, cold but crisp and bright, for the three veterans, Bill Stone, Harry Patch and Henry Allingham. Three of the last men surviving who served in the war to end wars.

Henry Allingham at 112 is the oldest man in Europe. He was born in London in 1896 and joined the Royal Naval Air Service. He served in Britain and then in France and at the Battle of Jutland. When the RNAS merged with the Royal Flying Corps in April 1918, he became a member of the new Royal Air Force. He is the last original member of the service to survive.

Harry Patch was born in Somerset in 1898. In 1916 he joined the Duke of Cornwall’s Light Infantrry and served at the battle of Passschendaele as No 2 operating a Lewis Gun. During World War II he was too old for military service so he served in the AFS (Auxiliary Fire Service) during the Baedekar raids on Bath and also in the maintenance of US army camps.

William (Bill) Stone is the youngest of the veterans. He was born in Devon in 1900 and joined the Royal Navy on his 18th birthday and served as a stoker on the battlecruiser HMS Tiger. He remained in the navy after the war and became a chief stoker during the Second World War, where he helped in the evacuation of Dunkirk on board HMS Salamander. That ship was torpedoed twice.

I got a good spot in the front of the public area, pushed forward by two kind men who thought there was room for a little ‘un.

Large screens showed us some of the pre-recorded footage from the BBCTV broadcast and extracts from the diaries and memoirs of men and women who fought and their relatives were read.

We sang Eternal Father Strong to Save and out of the corner of my eye I could see the veteran’s party making their way out of the Ministry of Defence building. William Stone was escorted by Marine Mkhuseli Jones, Harry Patch was escorted by Lance Corporal Johnson Beharry VC and Henry Allingham was escorted by Flight Lieutenant Michelle Goodman.

The escorts are also worthy of mention.

Marine Mkhuseli Jones, known as Cousie to his friends is South African born and Welsh. He was awarded the Military Cross for several incidents of gallantry while serving in Afghanistan.

Private Johnson Beharry VC of 1st Battalion, Princess of Wales’s Royal Regiment was awarded the Victoria Cross, our highest award for gallantry having twice saved the lives of comrades under fire in Iraq during 2004. During the second incident he was very seriously injured himself.

Flt Lt Michelle Goodman, from RAF Benson became the first woman to win the Distinguished Flying Cross for her bravery in Iraq during a particular operation flying her Merlin helicopter into Basra under fire to evacuate a wounded colleague.
They made their way to the Cenotaph and, with assistance, laid their wreaths. I couldn’t see what was happening but I found out later that Henry Allingham had attempted to walk from his chair to lay his wreath personally.

After Reveille Harry Patch was expected to give the oration, and I know that he did so in September at the Menin gate but today I could only hear the voice of the Bishop to the Forces.

The bishop used the version which Harry Patch insists upon and which he was taught by Revd Tubby Clayton of TocH at the chapel and canteen in Poperinge. It begins “With proud thanksgiving let us remember our brethren who fell.”

We sang the second hymn The Day thou Gavest Lord is Ended, prayers were said and the National Anthem and the three gentlemen and their escorts made their way down Whitehall and into Downing Street. I wish a senior member of the Royal Family had been present. (I found out later that the Duchess of Gloucester was present.)

Other organisations then had their opportunity to lay their wreaths.

I met Steve of the Pub Philosopher blog and we made our way to Trafalgar Square where another screen had shown the event and the British Legion had organised “Silence in the Square”. Wreaths and poppies were floating in the fountains.

The Times reporter saw things I missed – this is her report. And that of the Telegraph.

It is a dislocation of the generations to watch these very old men who would have been the same age as my paternal grandfather; but he has been dead for nearly 50 years. There were veterans from Dunkirk and D-Day present, and they are old men. I wonder how many veterans will still be alive in August 2035, the 90th anniversary of VJ Day?

We will remember them.

And I doubt we will see their like again. 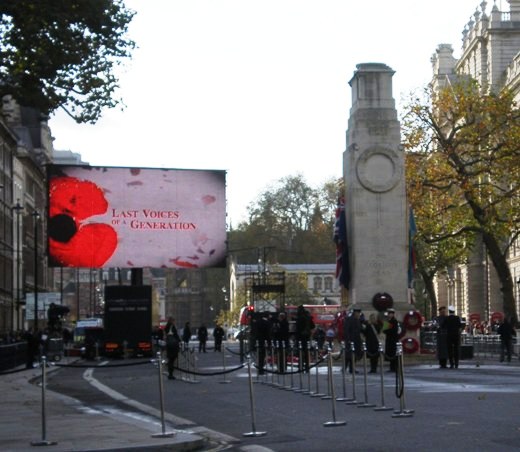 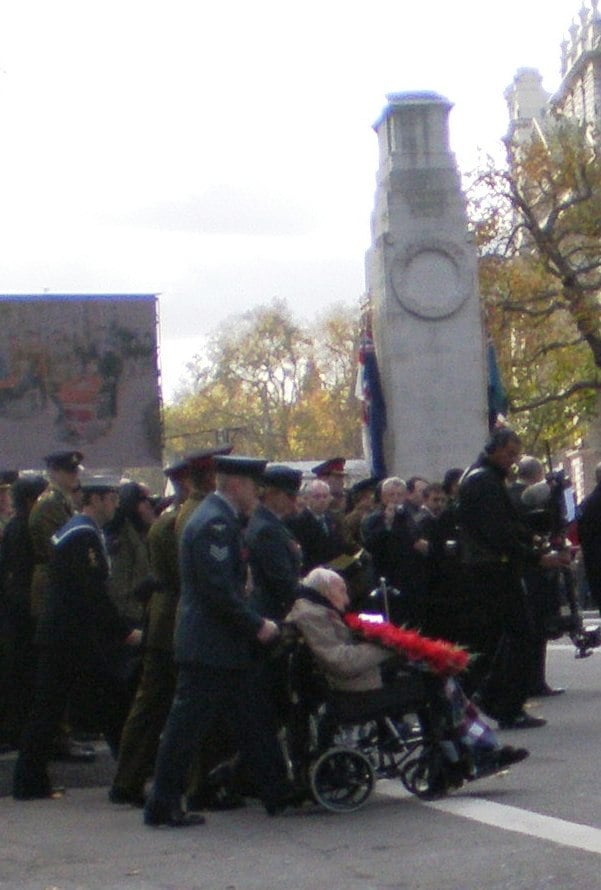 The veterans make their way to the Cenotaph, led by a piper. Henry Allingham is in the foreground. 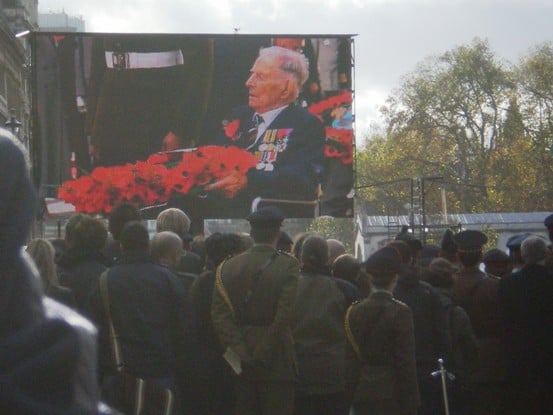 Members of the services watch Harry Patch present his wreath. 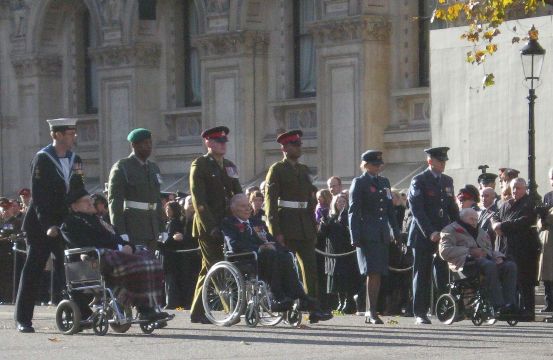 and Henry Allingham and other escorts make their way to Downing Street. 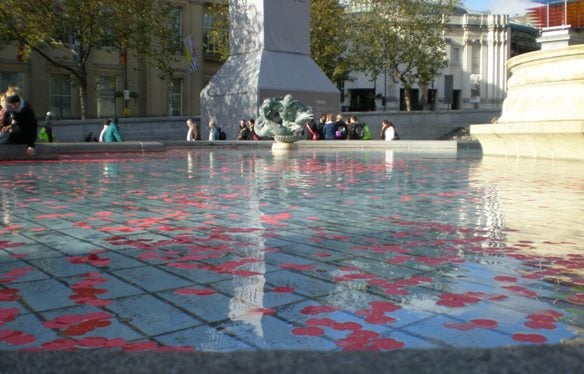 Poppies float in the fountains of Trafalgar Square.

To help New English Review continue to publish articles such as this one, please click here.