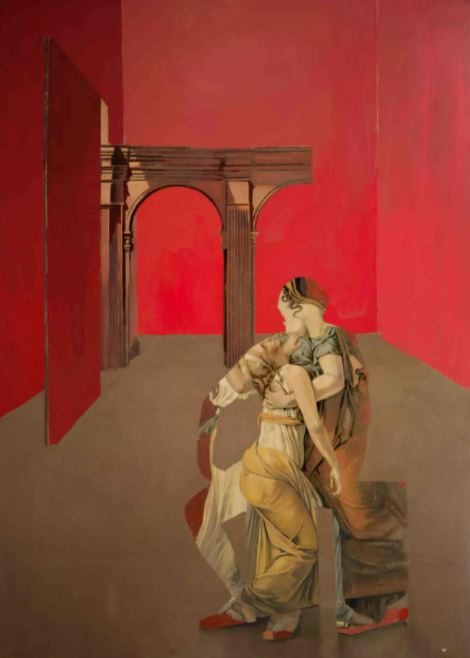 Brutus is set against Caesar in Shakespeare’s Julius Caesar. Caesar himself is a Rorschach. The part is technically under-written, leaving much space for interpretation on either side of the line. Caesar, on the evidence, is hardly the tyrant his enemies make him out to be. He is observant of Roman customs, is a good listener, an attentive husband, and is ready to change his mind. He is an autocrat but hardly a tyrant, and in personal terms appears to be a genial host. (He does at least offer wine to his guests—best Falernian, as I guess—whereas Brutus offers his co-conspirators not so much as a cup of coffee.) Once only do we see a flash of what his enemies fear, his reaction to the plea for Metellus Cimber: ‘But I am constant as the northern star’. It is the classic ‘No, no, no’ moment when the Leader is fixed to the role and cannot go back on the announced policy. That would be weakness. But the evidence of stubborn wrong-headedness destroys the Leader.

On stage, this dualism has led to wildly divergent interpretations. Beerbohm Tree’s Julius Caesar held the London stage from 1898 to 1911 (with the Forum scene as the Gala Performance for King George V), an era where the benign despot was fashionable. You can see the model in the film of Shaw’s Caesar and Cleopatra (1945), with its highly sympathetic role for Claude Rains. (And Caesar was a star part for Rex Harrison in Cleopatra.) But everything changed after 1937, with Orson Welles’s Mercury Theatre production. He saw Julius Caesar as a political melodrama with clear contemporary parallels. The Roman aristocrats wore military uniforms that suggested the fashions of the Fascist ruling class; Goering attended the 1938 Hamlet in Helsingor. Later directors did not abandon the idea of Caesar as an enemy of the people; Trevor Nunn’s production for the RSC (1972) made Mark Dignam’s Caesar a dictator growing ever more threatening. That production opened with a menacing coup de theatre, the entire company lined up and marching downstage towards the audience as if they were going to assault them. As Nunn pointed out, the news that Marullus and Flavius, tribunes of the people, ‘for pulling scarfs off Caesar’s images, are put to silence’ means that they’ve been executed. They had been guilty of vandalizing statues. At that time the liberal left was agitated at the prospect of Richard Nixon winning more power. Michael Kahn even toyed with the casting of Brutus as George McGovern. But the directorate set its face against a simple Hitler/Mussolini version of Caesar.

The politics of Julius Caesar is a wonder. Time and again we recognize what Beaverbrook called ‘Men and Power.’ The quiet, deadly politicking in the aftermath of Caesar’s death is close kin to our bloodless arrangements of today. ‘Your voice shall be as strong as any man’s/In the disposal of new dignities’ is Cassius‘s promise to Antony. When Antony, Lepidus and Octavius agree to the killing of their own relatives—‘Consent you, Lepidus?’ ‘I do consent, upon condition Publius shall not live’ (4.1.2-4)—it is the apportioning of ministries in a coalition.

The central figure in Julius Caesar is no kind of Rorschach. Brutus is a patrician, and the play defines him through his inherited position in the elite. Everyone says that Brutus is noble, and he takes for granted the conflation of two ideas: ‘noble’ as a sign of rank, and ‘noble’ as the mark of an elevated mind. With ‘noble’ goes its key attachment, ‘honour’. It is Brutus’s talisman: ‘Set honour in one eye, and death i’th’other,/And I will look on both indifferently.’ (1.2.86-7) Thus cued, Cassius cannot miss and opens his attack with ‘Well, honour is the subject of my story.’ Brutus is snared.

Pride of ancestry is the key to Brutus from first to last. His name is the reminder of the Brutus who led the opposition to Tarquin, driving him from the throne. Not to lead the conspiracy against Caesar would be a betrayal of his ancestors, his name, his identity. ‘Shall Rome, etc.,’ the anonymous message for him, is a blank on which Brutus at once prints his values. Brutus is fixed in the patrician cast of mind, imbued with a sense of family duty towards the country he owns. That is easily seen. More interesting are the ways in which he interprets his licence to do his duty, and the extent to which others cede to him their own rights. Brutus is a study in patrician dominance, in whose personal and class traits is rooted the failure of the conspiracy. His keynote, familiar to liberals today, is entitlement.

The point about Brutus’s performance is not that he is wrong part of the time, or even most of the time. He is wrong all of the time. Most of us can claim a few correct decisions here and there. It takes a Brutus to avoid the statistical chances of occasional success that mankind is prone to. From the initial decision to join the conspiracy, to his conduct at Philippi, the play is a catalogue of Brutus’s wrong calls. And yet he never questions his own judgement, even at the end. He feels no regret. This cast of mind is class-based, revealing itself through the extraordinary self-confidence that is the mark of the aristocracy.  But Brutus is not ‘arrogant’ as the world understands it, adopting a Junker manner towards subordinates (there are no equals). His behaviour towards his slave Lucius is exemplary. But in arrogating to himself powers and rights unjustified by performance, in making undue claims for himself, Brutus is the epitome of patrician self-confidence.

His actions are inner-directed and seem unaffected by others—unless one counts proposals from others, which elicit from Brutus a veto. His key soliloquy begins with a willed conclusion—‘it must be by his death’—and thereafter consists of a laborious shunting around of available reasons until they are acceptably in position. The essence is

What a giveaway these lines are! ‘Since the nominal complaint is not plausible, we’ll have to spin it.’ Here is the moral, inner-directed Brutus moving into naked political expediency. To call this the record of an agonized dilemma is a total misreading. The choice is already made; the mental process is a search for comfortable furniture. There follows the meeting with the conspirators, during which Brutus in rapid succession overrules proposals first, to bind them with oaths; second, to bring in Cicero; and third, to kill Mark Antony with Caesar. No one has thought of bringing in Caius Ligarius, till Metellus Cimber mentions him, and Brutus is happy to vouch for the man, no further discussion being needed. He is a member of the genus follower. Cicero will never do:

One leader is quite enough, thank you. All this is accomplished without significant opposition from the others, who capitulate in the face of Brutus’s wishes. The decision to let Mark Antony speak at Caesar’s funeral, and to speak second, is Brutus’s alone. Throughout, the unspoken principle is that Brutus knows best. Nothing can shake that conviction, not even his 100% record of disaster. Brutus is every inch a leader—or, more exactly, one who accepts the role of leader to which he is entitled. He doesn’t need a proto-election to confirm his standing—he hands over the Forum meeting to his enemy.  His oration to the Roman crowd over Caesar’s body is conducted in abstract nouns, a perfect anticipation of Orwell’s ‘Politics and the English Language’, while Antony is concrete and literal. Caesar’s body, and his bloodstained mantle are dramatically incontestable.

Then, take money, an issue explored in the quarrel scene:

(‘But you can.’) Cassius has the job of estate manager, charged with raising the rents of the tenants. The landowner does not want to encounter the tenants personally—that is the business of the agent. One sees in Brutus the archetypal liberal, the man who knows the value of everything and the price of nothing. And gets every important decision wrong. But once you appoint a leader, you’re stuck with him, as you are with his caste. Liberals always believe in high taxation, which supports the projects and lifestyle of the leaders.

Why do the others let Brutus get away with it? They too are ‘noble Romans’, and this is a dispute within the patrician order. The only answer is that Brutus is of a higher rank within that order. In Julius Caesar one cannot expect straightforward analogues to the class system elsewhere. Dukes, earls and counts cannot be rendered in Roman terms. But there is family distinction, a title of nobility, which gives the patronymic ‘Brutus’ immense standing among the conspirators and among Romans generally. ‘Let him be Caesar!’ is the crowd’s naive tribute to Brutus. The conspirators feel that they need his name, much as a company might like a letterhead peer on the board. Unlike that company, they also feel the need to defer to him. The family record is a special claim upon Romans. No one questions it, not even in the quarrel scene.

Brutus’s standing with the conspirators and other Romans corresponds to his later reputation with audiences. There is a general, not a universal, readiness to take Brutus at his own valuation, with a few reservations. The play questions Brutus’s claims: ‘Honourable men’ contains, in Antony’s Forum speech, a widening base of irony that grows until ‘honourable’ collapses. With ‘honourable’ is linked ‘noble’. Here as elsewhere, the word unites two senses: the formal claim to the order of nobility, and the qualities associated with greatness of mind. ‘Brutus, thou art noble’ (1.2.307) says Cassius, and Antony says it at the end, ‘This was the noblest Roman of them all’, which puts the question back, with unwinking candour, to the audience. Brutus unquestionably has greatness of mind, if that faculty is held to be undisturbed by self-righteousness, self-confidence in the face of all evidence and experience, and a self-determination to lead the state his way whatever the consequences. He’d be at home in today’s House of Lords, of whom around 90 are hereditaries.

‘Noble’ might seem to have had a battering in Julius Caesar. But it is the play’s trick to leave audiences disinclined to contest Antony’s eulogy. In part that is the nature of eulogies. One goes along with them. The criticisms of Brutus are unformulated in the dialogue, and the audience will have to do it for themselves. They may conclude that the liberal Brutus, in assassinating the fascist Caesar, has not exactly improved Rome. Mary McCarthy thought that the play is about the tragic consequences of idealism when it enters the sphere of action. And yet, Julius Caesar is the greatest play in the canon for past colonial countries. For Americans in the eighteenth century, it was the primal myth of revolution and liberty. For Africans in the twentieth and twenty-first centuries, it is the text that Nelson Mandela read and annotated on Robben Island, and Julius Nyerere translated into Swahili. ‘Julius Caesar is Shakespeare’s African play’ said John Kani, the South African actor, and a recent RSC production translated easily into present-day Africa with an entirely black cast. The flawed idealism of Brutus is still the play’s leitmotiv. He remains the noblest liberal of them all.

PrevThe (Fake) Free Expression Institute
The Past as Prologue AgainNext