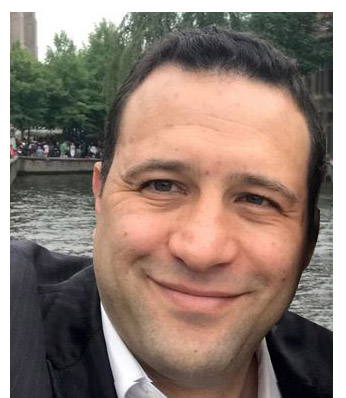 “What Phares has not mentioned while touting Haftar is that Phares has explored business opportunities involving Haftar’s son, Okba Haftar. The younger Haftar lives in Northern Virginia and works in real estate,” Friedman wrote even though none of it was true. “The timing of one potential business opportunity involving Okba Haftar overlapped with Phares’ public defense of the LNA’s [Libyan National Army’s] 2019 offensive [against Tripoli].”

He notes that the younger Haftar often advocates in favor of his father’s exploits in Libya.

Neil Livingstone, an anti-terrorism consultant and former Montana gubernatorial candidate, listed Phares along with Okba Haftar as directors of a consulting company he founded online and dissolved a few weeks later without launching. They were suggested as part of a potential larger board of advisors and experts in country conditions and international trade. Phares’ name was mostly listed to give credibility to the company’s potential expertise. Nothing came of it.

But what’s behind Friedman’s hit piece against Phares, in favor of the Muslim Brotherhood?

Khalifa Haftar’s Libyan National Army (LNA) is subordinate to Libya’s democratically elected parliament called the House of Representatives (HoR) based in Tobruk in Libya’s east. Militia supported by the Muslim Brotherhood and its al-Qaida allies called the Libya Dawn kicked the HoR out of Libya’s capital Tripoli in July 2014. HoR appointed Haftar as commander of the LNA in 2015. You wouldn’t know that based on Friedman’s piece in which he called Haftar “a renegade general who controls the eastern part of the country.”

He attempted to smear Phares in a twisted tale claiming that his friendship with Haftar’s son, a US resident, is enough to link the US scholar somehow “morally” to the actions of a group six thousand miles away in North Africa. He accuses the Libyan anti-Jihadi general with alleged war crimes committed by elements of the LNA by referring to a one-sided lawsuit brought by a Brotherhood-linked group called the Libyan American Association (LAA). No evidence, however, exists showing that Haftar personally ordered the acts found in the lawsuit.

Friedman never informs his reader of LAA founder Esam Omeish’s nearly decade-long campaign to lobby American policymakers to support Muslim Brotherhood rule in Libya. In February 2016, Omeish wrote an open letter on behalf of another group he created called the Libyan American Public Affairs Council (LAPAC) to President Barack Obama asking him to support the Mujahideen Shura Council of Derna, a group created by Al-Qaida in the Islamic Maghreb (AQIM). The HoR placed Omeish on its terrorist list in June 2016.

Nor did he let them know that the signatories of the biased letter calling for the investigation into Haftar including Reps. Tom Malinowski, Joe Wilson and Colin Allred are close to Omeish and have worked with his LAA. Another signatory Rep. Gerry Connolly is close to Omeish.

This raises questions about the political motivations behind the suit and the letter against Haftar who is an American citizen. At the same time, no similar requests were made against forces loyal to the U.N. backed and Muslim Brotherhood dominated Government of National Accord (GNA) based in Tripoli and supported by Omeish and the LAA.

The GNA stems from a failed reconciliation deal with the HoR imposed by the U.N. and supported by the European Union, Qatar, Turkey and the Obama administration. HoR and Haftar rejected the deal because of Islamist militia participation on the GNA side.

“The GNA’s presence in Tripoli is underwritten by the support of powerful local militia groups, some of whom are reportedly involved in human rights abuses, crime, and illegal detentions,” a 2018 report by the Congressional Research Service found.

In October, the GNA appointed Salah Badi, a former Libya Dawn commander responsible for the ejection of the HoR in 2014, as its chief of intelligence. Badi’s militia the Al-Samoud Brigade triggered Western outrage in 2018 after it fired rockets at civilian areas of Tripoli while it was aligned with the LNA, and the U.S. Treasury placed Badi on its sanctions list. Al-Samoud is backed by Turkey and includes Syrian fighters linked to Al-Qaida.

The GNA has close ties to criminal organizations involved in human trafficking of migrants into Europe, according to the Muslim Brotherhood-linked Middle East Monitor.

Friedman ignored this in his quest to portray Phares as a boogeyman.

Phares’ principled support for the LNA led by General Haftar continues his longstanding opposition to the Muslim Brotherhood, which he calls the “Mothership” of all Sunni terrorist movements from Hamas to Al-Qaida to ISIS. Friedman acknowledged this.

This has made Phares the subject of relentless propaganda attacks by outfits including the Council on American Islamic Relations (CAIR), a group that FBI and internal Muslim Brotherhood documents have linked to the movement. Federal Judge Jorge Solis ruled that the government had built at least a “prima facie case as to CAIR’s involvement in a conspiracy to support Hamas” in the 2008 Holy Land Foundation (HLF) trial.

CAIR and other pro-Brotherhood propaganda outfits such as Georgetown University’s Bridge Initiative have previously used Mother Jones in their effort to discredit Phares, as has the Southern Poverty Law Center (SPLC) based on a 2011 MJ article. That article portrayed Phares as an “ideologist” for an extremist Christian militia during the Lebanese Civil War, but that story has been disavowed and condemned by Toni Nissi, Mother Jones primary source, who said his words had been “maliciously distorted.”

“I am appalled and totally disgusted that Mother Jones’ Adam Serwer twisted few words, out of another subject unpublished long interview, in the purpose of attacking Professor Walid Phares, with the goal of tarnishing his image during a Presidential campaign in the US,” Nissi wrote. Mother Jones’ other source is a former member of the Lebanese Forces, who turned into a supporter of a major ally to Hezbollah. She fabricated quotes from a lecture offered by Phares some forty years ago in Lebanon, which are in contradiction to all the books and articles that the young scholar had published by that time.

Past LAPAC board member Gaddour Saidi shared Friedman’s article to its Facebook page. Saidi is a Muslim Brotherhood member who has closely monitored Phares on his personal Facebook page for years. Bank records from the 1990s submitted as evidence in the HLF case show he co-signed a bank account with top Hamas leader Moussa abu Marzook and was the terrorist’s business partner.

It’s clear that Phares is an obstacle to the Brotherhood’s political goals in this country, in Libya and in general terms in the larger Middle East, which makes him their favored target. Friedman is all too eager to put politics before journalism.

John Rossomando is a Senior Analyst at The Investigative Project on Terrorism. In addition to The IPT, his work has been featured in numerous publications such as Red Alert Politics, CNSNews.com, The Daily Caller, Human Events, Newsmax, The American Spectator, TownHall.com and Crisis Magazine. He also served as senior managing editor of The Bulletin, a 100,000-circulation daily newspaper in Philadelphia and received the Pennsylvania Associated Press Managing Editors first-place award in 2008 for his reporting.